Ask a Python developer, and you will learn that there is nothing better than Python. Ask an experienced PHP dev, on the other hand, and they will give you plenty of reasons for using PHP. And if you allow the two to confront their opinions, it may as well turn out that you’re attempting to compare apples with oranges.

Think about the choice between the two backend languages from a business perspective, however, and you’ll see that setting Python against PHP makes much more sense. How is that? As an entrepreneur, you’ll most likely base your decision on factors like popularity, versatility, or performance – because all of these will impact the budget and time needed to develop your dream app.

Let’s now list the pros and cons of the two solutions and see which one is the winner of the Python vs PHP battle.

Let’s start from scratch by discussing how challenging it is to learn either of the backend technologies.

Being a general-purpose language, Python is the easier one to comprehend – and as such, it’s often the no.1 language taught at the entry-level programming courses. What’s more, its syntax is pretty straight-forward and concise. The resemblance to the English language makes Python code is not only easy to write, read, and maintain but also short compared to code written in other languages.

Although PHP is a general-purpose language as well, it’s primarily suited for web app development, which in itself makes this solution more complex. Nonetheless, it’s worth mentioning that even though Python seems easier to learn, after getting to know the basics of PHP, both are rather beginner-friendly in comparison to C++ or other languages.

To err is human and so is to seek help from others, which is why the next factor influencing the choice of the backend technology we’re taking into consideration today is the support of the online community.

Python and PHP are neck and neck in this respect. Since both boast large communities, they are very well-documented and there’s an abundance of forums, discussion boards, and tutorials exploring all the complexities of the languages in question available on the internet. In terms of the formal support, the only difference between Python and PHP is that the former is backed by the Python Software Foundation – a non-profit organization that funds Python-related projects and helps organize Python-themed conferences all around the world. 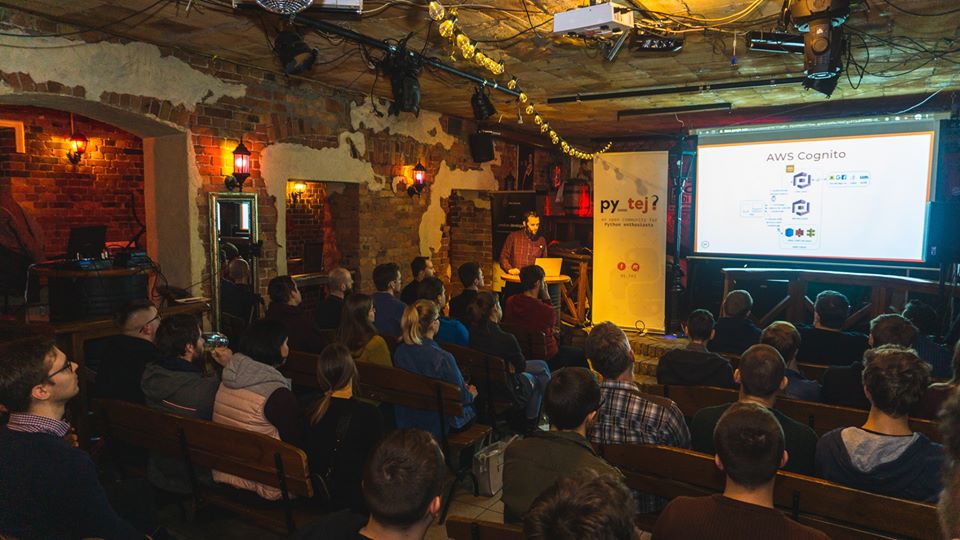 Developers love Python. Need proof?
Here’s a photo of a full house at the last edition of py_tej

One thing that can slightly tip the scales in the Python vs PHP rivalry is the perception of the two backend technologies. While the former is considered to be up-to-date and flexible, the latter has a reputation for being old-fashioned, cumbersome, or even insecure. While not entirely true, such stereotypes surely take their toll on PHP’s popularity, especially among those new to the dev community.

Popularity and use cases

You might get the impression that Python is the more popular of the two – even if you look at our blog, you’ll notice that more entries are devoted to Python and its frameworks. If you examine the usage statistics for websites, however, you may be surprised to see that it’s PHP that leads in the popularity race. According to W3Techs, Python is used by 1,4% of all sites that revealed what server-side programming language they use (with less than 40% using Python 3) whereas PHP backs the staggering 78,8% of websites (out of which 49% use its latest version, PHP 7). 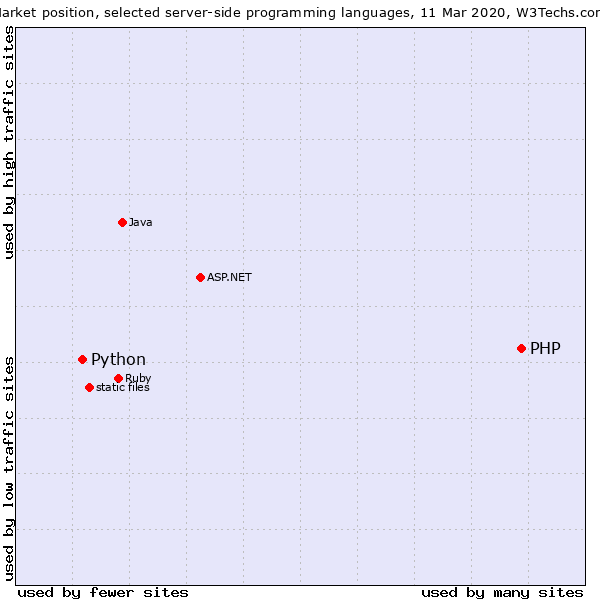 There is one explanation for the abovementioned disproportion: while PHP was born as a web development solution, Python was designed with a different purpose in mind. The latter does exceptionally well in Artificial Intelligence, Machine Learning, Deep Learning, as well as data science – if you’d like to learn more about these and other fields in which Python is used, you’ll find all the necessary information in our guide.

Thinking about the Python vs PHP competition, it would be a shame not to mention the big brands using either: Uber, Netflix, Spotify, Instagram, Google making use of the former and Facebook, Slack, Lyft, WhatsApp, as well as 9GAG being based on the latter.

When it comes to startups with limited time and budget, however, Python is the way to go. To create a representative app when you feel the time pressure, Python is just the right choice. Also, you won’t need a bunch of developers to work on a project. What does it mean for you? Basically, within a short time, you can be ready with an MVP or even a fully-fledged app.

It’s said that hard work pays off. However, in many cases working smart is much more effective than working hard. Just think about app development: of course, you can write every piece of code from scratch – but what’s the point if you can streamline the development process with libraries and frameworks?

As far as the library support is concerned, Python seems to take the lead. Not only does it offer a wide range of libraries (just think about the abundance of the machine learning ones like TensorFlow or Scikit-Learn) but it also facilitates package installation and management with pip. Although PHP doesn’t do as well in this regard, it still allows for integrating libraries into an app with two tools: Packagist, a package repository, and Composer, a dependency manager.

In terms of web frameworks, either of the two backend languages will serve your project well. If you go for Python, you can enhance your web app’s performance and shorten the time-to-market with solutions like Pyramid, TurboGears, Bottle, CherryPy, Flask or Django – the last one being best known for its simplicity and efficiency. If, on the other hand, you decide on PHP, you are likely to work with Cake PHP, Codelgniter, Laravel or Symfony. Either way, your web project will be in good hands.

Another criterion for our Python vs PHP comparison is speed which may be a dealbreaker, especially in the case of latency-critical applications.

Surprisingly for some, PHP is the winner in this category. How is that possible if PHP 5.x was dragging its feet most of the time? Well, ever since 1999 PHP has been powered by the Zend Engine but with the introduction of the latest version of the server-side language came a major change. Currently, PHP 7 runs on the refactored Zend Engine known as PHPNG that has optimized memory usage and improved the language’s performance twice.

And how does PHP 7 compare to Python? It’s said to be three times faster – a result which may not be that impressive if we’re talking about an ordinary application but critical if you’re considering to build a complex system that’s processing thousands of hits an hour.

Last but not least, when choosing between Python and PHP, one should consider the availability of debugging tools as well. All because a lack (or poor quality) of thereof would require developers to identify errors manually and spend significantly more time resolving them.

One again, we have a draw. In both Python and PHP debugging is fairly simple with tools like PDB and XDebug. While they offer similar debugging features, the only difference is that the latter requires more preparation.

Python vs PHP: the verdict

PHP and Python have a lot in common and both are quite powerful when it comes to web development. However, in the end, you simply have to make a choice. Before we proceed to help you with that, take a look at the summary of differences between the two server-side technologies:

Let’s make it clear: a good software house will employ programmers knowing both languages. All because PHP is the core of the vast majority of web apps while Python is gaining more and more audience due to its readability and flexibility.

Nevertheless, if you strive for a future-proof state-of-art solution that won’t cost you a fortune, Python seems to be a better choice. Of course, there is room for PHP as well but when time is money and you need to sell your idea before anyone else comes up with it as well, a quicker quality solution is always the way to go.

See how we can help bring your web app project to life!

Is it worth the hassle for a PHP developer to learn Python?

Laravel vs Symfony - Clash of the Frameworks

June 2, 2017
Learn which backend technologies to bet on in 2022!
X
READ GUIDE
Wondering what backend solutions to pick
We asked our engineers to share their best backend bets for 2022. See why they picked Python, Kotlin and Node.js, and which frameworks they paired these solutions with! READ GUIDE
X