Today, development teams have tens of JavaScript frameworks and hundreds of libraries at their disposal. Selecting the right frontend technology becomes a tempting choice, especially for those who are keen on testing novelties. But no matter how much your developers’ hearts beat for the latest JavaScript child (hard to count them all), the decision about a tech stack needs to be pragmatic.

Today, we will try to adopt such a pragmatic attitude while comparing Vue and React – two stars that shine brightly in the sky full of JavaScript technologies.

Before going into the differences between Vue and React, let’s point out what they have in common. Both rely on component-based architecture, use the concept of virtual DOM, and perform extremely well compared to other JavaScript technologies. However, it’s not similarities that keep them in the JS Top 10. It’s the differences.

In this article, we’ll compare Vue and React in the following fields:

Who stands behind Vue and React?

React is an open-source JavaScript library born in 2013 as part of the Facebook empire. Since its first release, it has been winning hearts of frontend developers, especially against Angular.

Be sure to check out our comparison of Angular and React as well!

As we’re writing this article, React’s community reaches 147k stars and 28.5k forks on Github. Naturally, most companies owned by Facebook use React in their products. Its fame, however, goes further and reaches hundreds (if not thousands) of web applications across various industries. Among avid React users, we’ll find Uber and Lyft (sharing apps), Udemy and Coursera (educational apps), Discord and Slack (communication apps), and many others.

Speaking of React, we need to mention its posterity, React Native, that allows us to leverage the power of React in mobile applications.

Vue is a progressive JavaScript framework developed in 2014 by Evan You, an ex-Google employee. In the last years, the framework has been growing thanks to crowdfunding via Patreon. With success, actually. Enough to say that Github already noted 162k stars and 24.6k forks, which makes it just as popular as React – even though it’s not backed by a big and well-known company. Among companies that embrace Vue’s performance, we can spot Glovo, Lime, Gitlab, or Pluralsight.

Vue vs React: framework vs library

Let’s face it. While Vue is a fully-fledged framework, React is “just a library”.

As a framework, Vue comes with the entire suite of modules and rules necessary to build the entire web application, routers, and forms among them. In fact, you don’t need anything else – no external library, no state management module, or any other magic for your app.

If it wasn’t for React’s community and a whole range of additional tools React can beautifully work with, we could finish off our comparison just now. Luckily for React, the ecosystem that has grown around it makes it just as functional and viable for developing full applications as Vue.

Selecting the right team for a project is one of the most important decisions to make. What if your team doesn’t include React or Vue developers yet and you need to recruit them first?

It looks like you are much better off finding experienced professionals for React than Vue. A survey conducted by Stack Overflow in 2019 shows that React to Vue developers ratio is 2:1, which means that it’s twice as easy to find professional React developers. 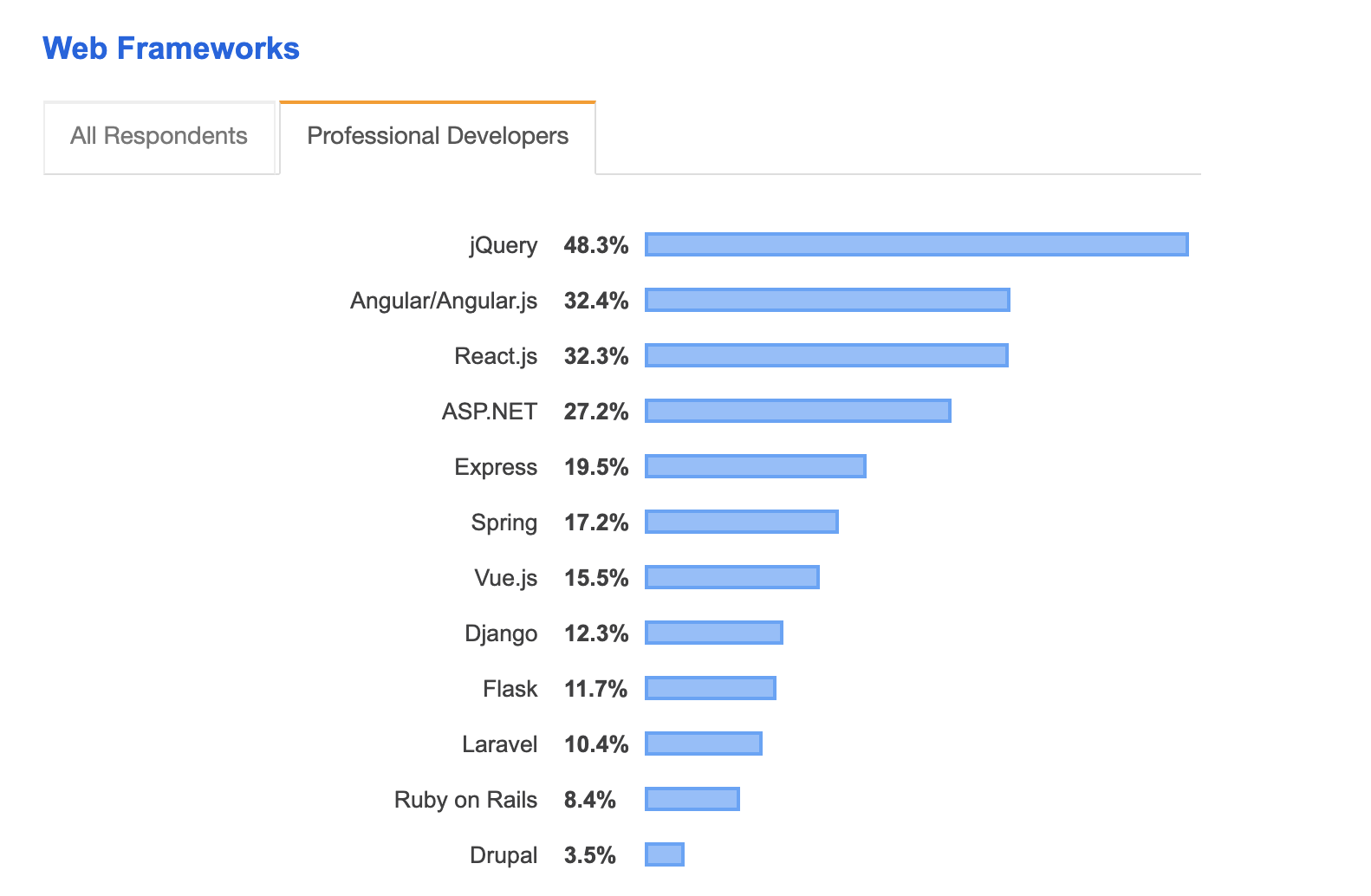 According to HackerRank 2020 Developer Skill Report, React has been trending in the top three most known JavaScript frameworks in the world. In this regard, it absolutely outshines Vue.js which is placed in the second half of the Top Ten. 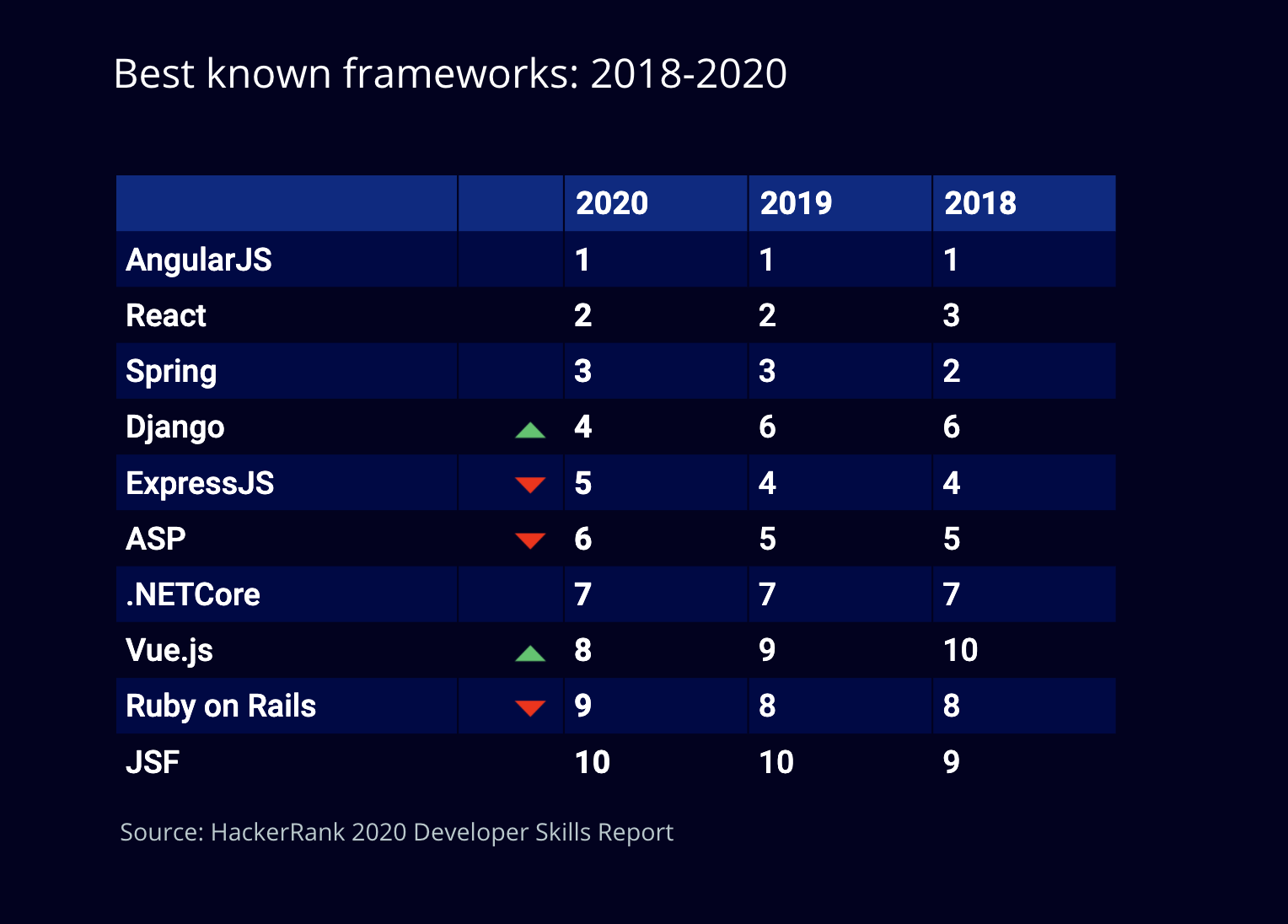 Even though the numbers speak for React, it doesn’t necessarily mean that choosing Vue doesn’t give you a head start when setting up a team. Remember how easy it is to learn Vue. A skilled frontend developer familiar with any other framework (e.g. Angular) won’t have any problems starting with Vue and quickly becoming dextrous in using the framework. When we look at the frameworks which developers are willing to learn in 2020, we can expect that both React and Vue will gain quite some new users in the next years. 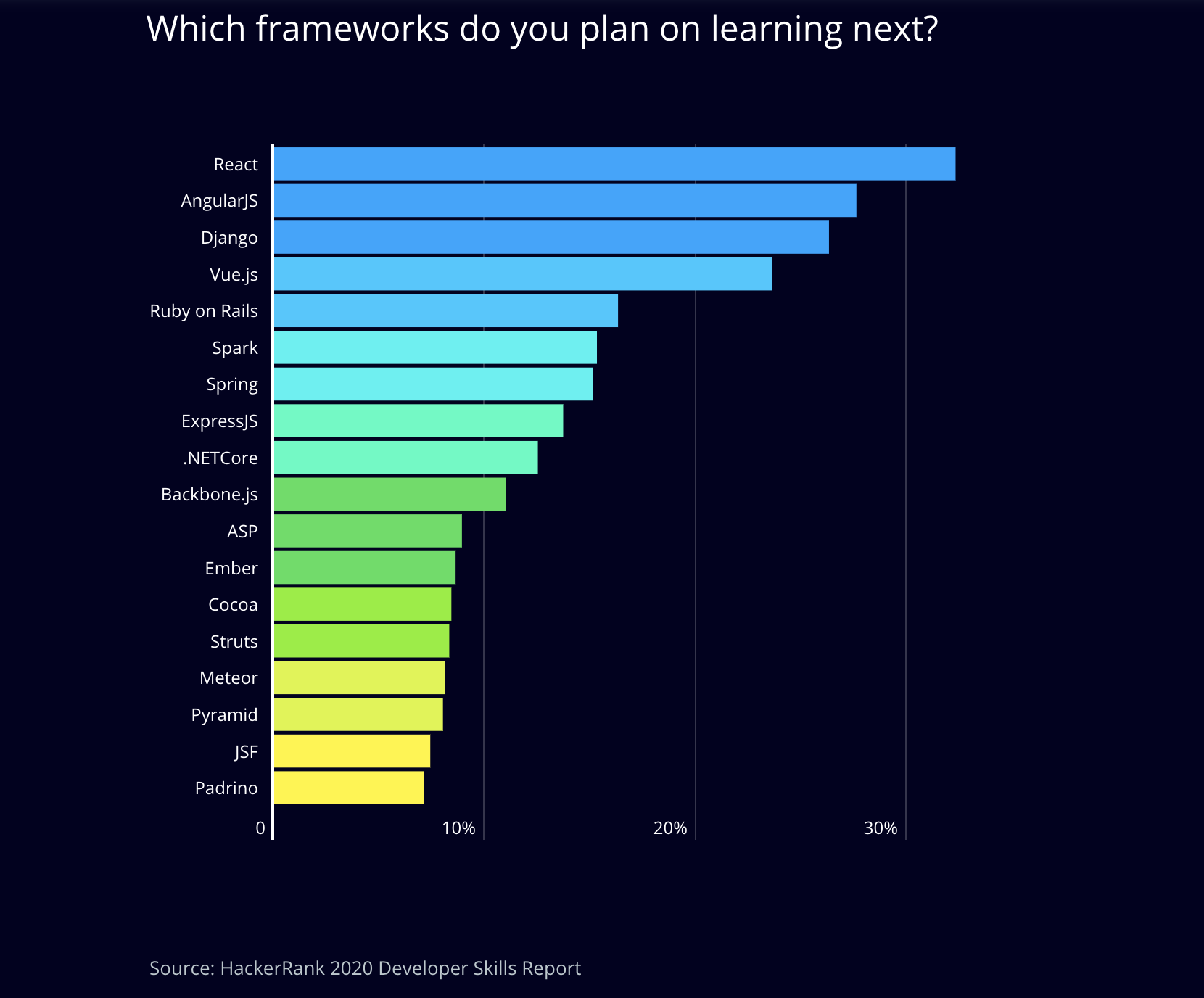 What is a practical dimension of React being a library and Vue a framework? As much as React is a lightweight and simple library, more advanced usage usually depends heavily on third-party libraries (Redux, Enzyme, or Material UI to name a few). Interacting with other JS libraries makes the learning curve steeper.

Vue is more straightforward. It already contains a rich set of internal components and libraries, which makes a developer grasp all necessary information in one place: the Vue documentation.

One of the biggest assets of Vue, already mentioned in the article, is a gentle learning curve. Combined with a rich set of tools such as Vue CLI and Vue UI, it’s an excellent base for a quick delivery of prototypes, MVPs, or other projects meant for market validation. But that’s not all Vue can do. Apart from being a perfect match for an MVP, Vue is also a cost-effective solution for small and medium apps that need a chart-driven intuitive and aesthetic UI. The framework is extremely light, with a typical application weighing around 20-30 kb – which can be up to two or three times lighter than in the case of Facebook’s solution.

React is a different breed. Unlike Vue, it’s made for large and complex web applications rich in components that frequently change their state (like in this logo creator app). Dynamically changing content or navigation showing up and disappearing are only some examples of elements that are often used in React applications. You might also want to use React’s ability to work with interactions for SaaS applications and websites with a complex, non-traditional structure.

How do the benefits of both technologies work in practice? Read our case studies to find out:
🔸 Genuine Impact, a risk-management app for DIY investors using Vue
🔸 Sendinblue, a powerful relationship marketing platform using React

The two technologies clearly serve different purposes. Thus, when you want to build a web application, analyze its complexity and the need for sophisticated components first. If you don’t need any of them, opt for Vue as a lighter solution.

Vue vs React: Templates vs JSX

Syntax is one of the key differences between Vue and React. Each technology uses a different approach, which leaves its mark on the code structure.

Vue seems quite conservative when it comes to syntax. It takes advantage of the separation between the logic and the templates. In this sense, templates in Vue look like good old HTML and can be inserted into an HTML code without any conversions. For many developers who have been working with frameworks such as Angular, the template-based syntax may feel more natural to use.

As opposed to Vue, the markup and the logic are mixed in React. It’s possible because React uses JavaScript Expressions (JSX), a special way of writing HTML in JavaScript code. This includes leveraging the power of temporary variables or flow controls. Even though similar to HTML, JSX may initially pose some problems for developers who have never used it before. In terms of styling, React community offers solutions such as JSS or Styled Components.

When it comes to mobile solutions, React outshines Vue all the way. Its mobile counterpart, React Native, is one of the top JavaScript technologies made for cross-platform development. React developers can easily start with React Native even though instead of web components, React Native comes with native mobile components for iOS and Android.

Vue is a different story. Even though there is a collaboration with Alibaba’s cross-platform UI framework Weex, there’s no mobile equivalent of Vue – at least not yet.

Even though native options don’t speak of React or Vue’s web capabilities, they’re a point to discuss if we plan to build an entire app ecosystem including both web and mobile platforms.

Let’s take a look at non-technological traits that either attract or discourage developers: popularity and maturity. The first pertains to the power of the open-source community and the potential to maintain ever-growing libraries. The latter shows whether the technology is just a fad or a solution that’s here to stay.

Looking at the Google Trends graph showcasing data from the last five years, one can see that the steep rise of React Native’s popularity had a few drops here and there but remained growing. According to The State of JS, it has been keeping the pole position of the most satisfying web framework (see image below), switching places with Vue (trending second) in 2018.

As of today, Facebook’s solution is one of the most popular cross-platform technologies out there.

Vue, on the other hand, looks more stable but flatter. The percentage of developers interested in learning Vue reached 64% in 2019, outperforming React by 3%. It shows that even though Vue is younger and less mature than React, the credibility it won in the developer’s community is very strong.

JavaScript rings are full of strong players. React and Vue seem to wear the crown of the most wanted web technologies. Even though similar when it comes to performance, learning curve and DOM manipulation, each is an ace in their own game. React makes it easy to manage state even of a large set of components, whereas Vue is a perfect case for fast (but not furious) prototype and MVP development.

The last three years proved that new frameworks and libraries are going to become a constant component of the JavaScript landscape. They can make development easier and faster – if used wisely and in line with what a particular technology offers best.

If ever in doubt, whether to choose Vue or React for a project, get in touch with our software consultants to receive expert advice.

Vue.js from scratch - why software developers got so crazy about it?

Solar Energy Sector Companies: Challenges for 2023 and How Technology Helps to Address Them