Poland has one of the fastest-growing economies in the world, which underlines the fact that it’s a stable country for IT outsourcing. The Polish startup scene is constantly growing. As a result, more and more people are interested in new technologies and choose IT studies, which has led to a rise in the number of talented developers available for hire. It is no surprise that many companies outsource their web app development to software houses in Poland.

Poland remains the most attractive IT market in Central and Eastern Europe. We regained our independence in 1989 but in a short time, we’ve become an economic superstar in Central Europe. Check out why Poland is the top place to outsource development.

It's no surprise that every company, no matter it is a startup or a big business, is looking for a high-quality software development firm to work with that won’t break the bank. While professional software development is never cheap (even if outsourcing), Polish development teams have a lot to offer. It's because of the lowest labor costs within the European Union. According to the Association of Business Service Leaders (ABSL), you can find and hire highly experienced Polish developers for under $3.000 a month. As you can see, a world-class and experienced dev can be hired for $30.000 - $40.000 a year. Try doing it in Berlin or London, not to mention Silicon Valley, where you have to pay about $100.000 a year. Multiply it by 20 or 30 developers and big money come to play.

At this point, there is a high possibility of coping with one of the most popular IT outsourcing dilemmas - whether to contract a software house for your project or to hire an in-house team of programmers. In this case, you should take into account the real cost of hiring a software developer, which in many circumstances is much higher, especially if you wish to have a full stack development team, than outsourcing a single project. What’s more, low costs don't mean low code quality - Polish programmers are one of the best software developers in the world, I’m going to take a closer look at this in the further parts of this article. 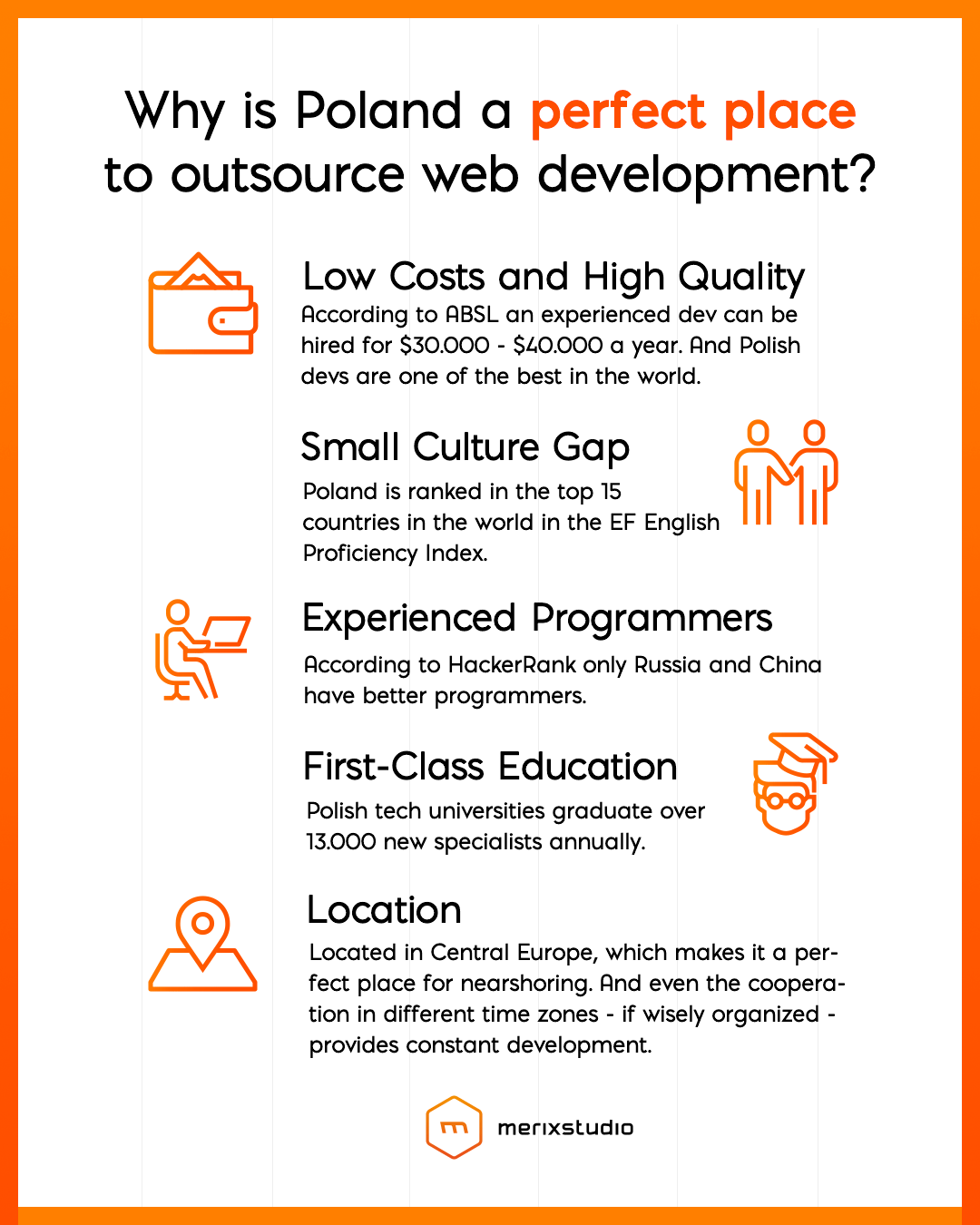 One of the largest advantages of outsourcing a development process to Poland is the fact that there's nearly no cultural gap. English is a standard in Polish schools, so our programmers usually speak English very well. Also, a lot of software houses provide English courses to their teams (it's also one of the job perks at Merixstudio). As a result, Poland is ranked 13th in the world for English skills in the EF English Proficiency Index 2018 (we’re getting ahead of countries like Switzerland or South Korea), so you shouldn't be afraid of communication problems.

To be honest, we probably watch more American and English TV series than Polish ones, so we have the western culture at fingertips. It's a powerful mix; no surprise that Silicon Valley reaches to Poland when it needs brainy devs.

OK, you're right, you can outsource even cheaper to India or China. But those who have already tried to do it would probably claim that the cultural differences are much bigger than in Poland and quite often negatively impact effective product management and code delivery.

As I mentioned before, Poland is still considered an emerging market. It wasn’t until the fall of the Soviet Union that we've opened up to the (also tech) world. But it does not mean that we are some muggles! Polish software houses give their dev teams a chance to work with some of the world's best IT companies, and in multicultural environments (according to ABSL 66% of people working in large IT services companies are employed by foreign enterprises). We can simply make it stick in an example of Merixstudio. Just look at our portfolio with a dozen of projects we did for offshore clients. 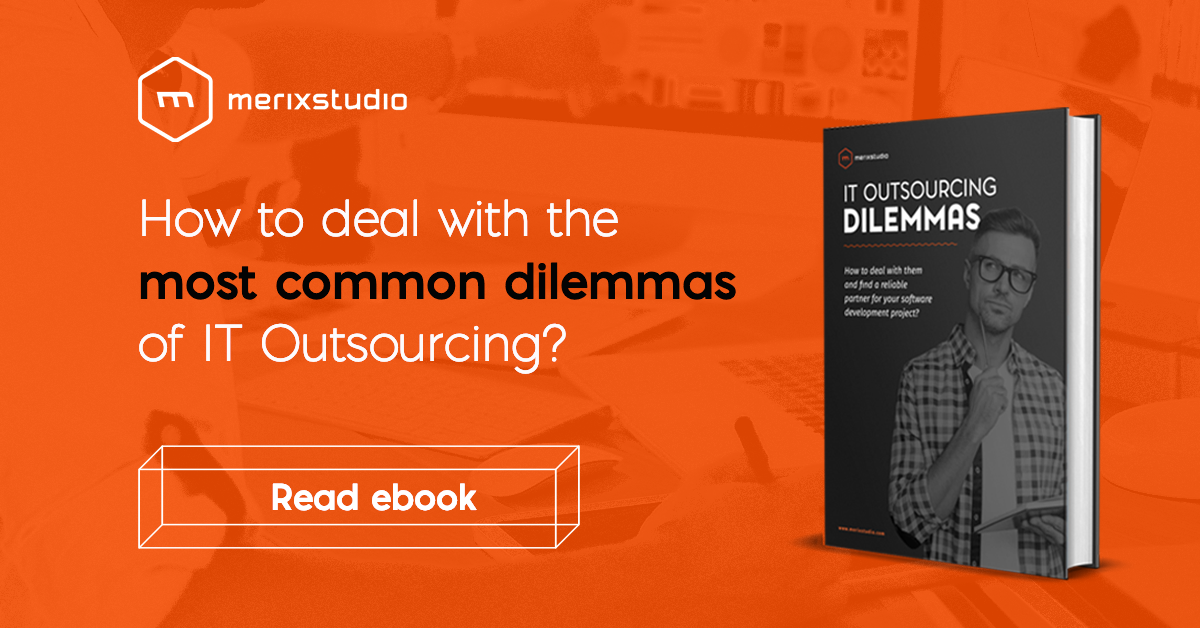 Poland has one of the best programmers in the world, and according to the HackerRank report, only Russian and Chinese developers are ranked higher. When looking for the right destination you should focus on finding the best software developers, and Poland can provide them. It speaks for itself.

Almost 70K, it's a number of  IT students in the academic year 2017/2018 according to GUS (Central Statistical Office in Poland). Polish tech universities graduate over 13.000 new specialists annually. These statistics prove that Poland can be called the next software development hub that is in the top of cutting-edge technologies.

In addition, Poland is becoming an increasingly popular study destination, with more than 72.000 international students choosing Poland in 2017/2018. As you can see, the top-notch Polish universities attract talented young people from all over the world. It's because of their excellent reputation and low-cost of living in our country.

What’s more, Warsaw University of Technology features in the QS University Rankings, and it's ranked 18th among universities in Emerging Europe and Central Asia. It claims a place among the leading technological institutes in Europe and is one of the region’s largest providers of technical education.

To make it short, the talent pool in Poland is one of the reasons why companies and startups decide to outsource their development to our country.

One of the main reasons Poland has become an IT hub and outsourcing destination has to do with its location. Poland's strategic position is advantageous; it allows both clients and developers to find solutions in a quite short time.

Outsourcing to Poland from the UK or Germany means practically no time zone differences because it's just one hour (or none). So, when it comes to nearshoring, all works can be organized in the same way, which streamlines the development process. What’s more, Poznan, where Merixstudio is located,  is only 3 hours drive from Berlin, which makes it a perfect place for German companies to nearshore their IT projects.

You can ask "that's great, but I'm from the US - what about that?". Just think that overlap in the working day will be even bigger when you decide to hire a development team from India. Not to mention cultural barriers you will undoubtedly be faced. It's a maximum 9 hours difference between Poland and the US - it’s not that bad, isn’t it. What’s more, the time difference also can be beneficial for your projects, as it provides constant development. How is that even possible? It’s simple - remote teams in different time zones are going to complement each other work. For example - when a task is completed at the end of the working day it can be passed to the QA team that has just started working. So as you can see even if there are some disadvantages of IT outsourcing, by acting wisely you can turn them into its benefits.

The closer location and overlapping work times the better communication is. It means less frustration, quick respond and speeding up of a development process.

Why outsource your IT projects to Poland?

Poland is often considered as a software house of Europe. And being a great IT outsourcing destination is one, but not the only reason for that. Polish developers by gaining skills and combining them with an Agile approach have become partners for the most advanced corporations and startups. Companies from all over the world come to Poland for numerous reasons. One of the most important of them is flexibility and the talent pool of young devs'. In addition to their great knowledge, they are hired by international firms because of their excellent communication skills.

If you decide to invest in the Polish software development team, you can be sure that you can focus on your business, and you'll receive a high-quality digital product at the same time.

The IT market in Poland is constantly growing. This fact, mixed with low labor cost and talented programmers, triggers many excellent business opportunities that both startups and mature enterprises can only benefit from.