What’s data visualization design and why should you care?

As the very name suggests, data visualization design, also known as dataviz, refers to the visual presentation of data. The concept has been around for ages, ever since the introduction of maps. However, it wasn’t until the 17th century that the first visual representation of statistical data was issued. Back in 1644, Michael Florent Van Langren, a Flemish astronomer, used a graph to show the wide range of estimates of the distance in longitude between Toledo and Rome. In the 19th century, on the other hand, William Playfair introduced a number of graphs which we use until today, including a pie or a bar chart.

Today, data visualization is essential for educated decision-making. All because of the ever-increasing amount of data produced every second. According to the World Economic Forum’s estimates, we produce 2.5 quintillion bytes of data every day and 90% of all data has been created in the last two years. These numbers leave no room for doubt: to make sense of even a small fraction of data available, we need well-designed (meaning both aesthetic and readable) charts, graphs, and maps. They come in handy in various fields; however, if we’re talking app development, there are certain industries that need data visualization more than others, e.g. fintech or healthcare. 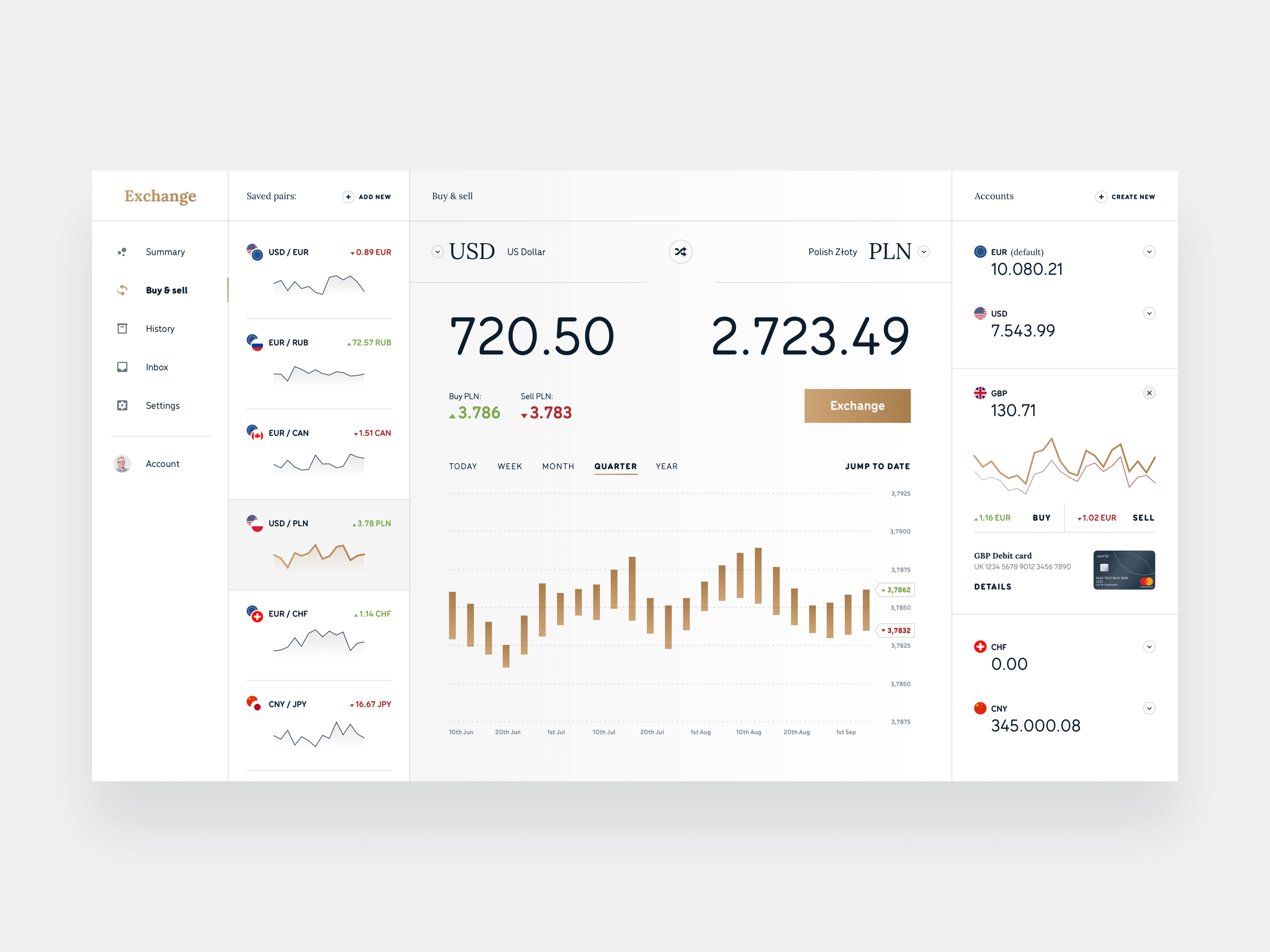 As you can imagine, there are countless benefits of enriching your mobile or web application with data visualization. For starters, by introducing visual elements such as charts or maps, you present information in a way that makes it easier for human brains to spot trends and patterns. Then, the proper data visualization design helps to guide decision making and gives a better sense of knowledge about a given topic. Last but not least, when interactive, dataviz goes deeper than traditional graphs – as such it not only allows users to quickly manipulate data and go into details quickly but also it also makes information more memorable.

As you can see from this introduction, data visualization design is about much more than just pretty charts. Having this and the above-mentioned benefits in mind, I decided to share with you a couple of tips and tricks which will – hopefully – allow C-level executives to recognize well-executed dataviz quickly and help designers present data better.

Get serious about data visualization design

While it might sound snobbish, the truth is that as designers we carry a special burden of responsibility towards the users. Bearing in mind the data visualization goals, it’s safe to say that our designs have the power to legitimize information and lift the burden of interpretation and analysis from the user. 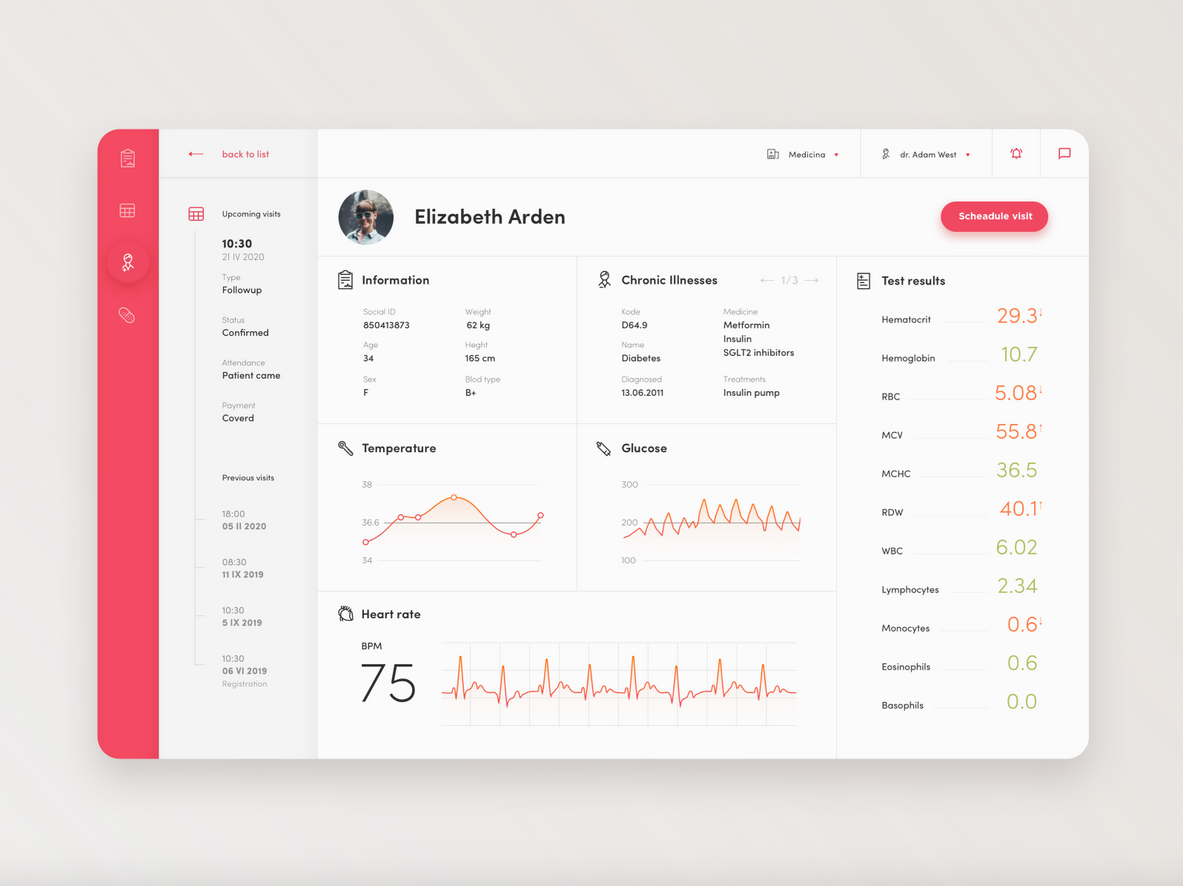 When it comes to healthcare apps, clean dataviz can save lives

Bad data visualizationdesign, on the other hand, can misinform users as well as lead to false conclusions and misguided actions. It may not be that big of a deal when designing an app for dog walking services where the poorly pictured stats cause some annoyance at worst. But if we’re designing healthcare software or a factory line operating display, the stakes raise. If your charts are going to affect somebody’s safety, money, or even life, you have to get serious about their quality.

For me, this is the fun part – the one where I can learn a lot about things that I wouldn’t be able to grasp otherwise. To create a good data visualization design, you need to try to understand the data it is supposed to represent. While it might sound obvious, sometimes designers are not given enough time to do proper research.

When working on data visualization, it’s vital not to rely on assumptions. You need to know what stands behind the numbers and charts you are drawing and how users will read the data. This will help you not only to adapt better when there are changes in the project (and sooner or later, they will occur in any project), but it will also enable you to suggest better visual representations. 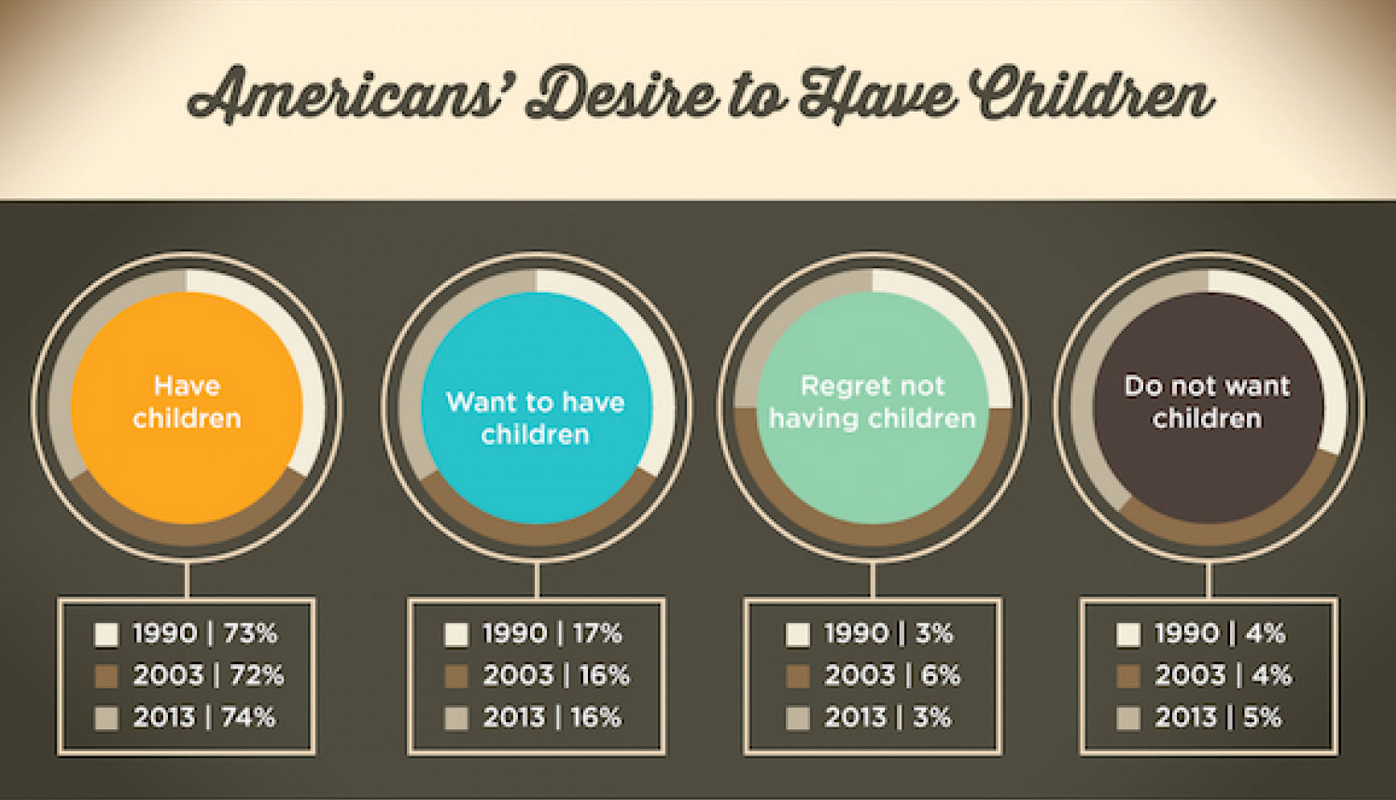 Once you dig deeper into values, the meaning is clear – however, using multiple values that’s don’t add up in a single pie chart can be confusing at first glance

Think, for example, of a water supply station. Do you think it’s best to give users numbers indicating the capacity of the tank and the state of the pumps, and ask them to do the calculations themselves? Or maybe it’s better to visualize these values with bars? I bet you have the answer right away.

I know, it sounds like a no-no, but hear me out. This rule applies mostly to color selection. When dealing with a complicated dashboard that shows lots of data, the key is not representing the brand but the information.

Working on data visualization design, a designer needs to create a versatile color palette, ensure that the hues will peacefully coexist, and assign them specific meanings. Of course, when taking the last step, the designer needs to bear in mind cultural associations. For instance, in western cultures green stands for good and red is usually associated with something negative. Think about a situation in which the brand’s corporate identity is based on red hues and we want to make it our primary information color. Imagine the recipients’ confusion when they see a yearly profit marked in the brand’s color. For them, red would probably be anything but an indicator of a productive year.

When choosing a color palette, go for intuitive colors. This way, the users will recognize the meaning behind the data faster.

Of course, the whole color palette should be descendant from the brand identity – designers should create a logical and well-interpreted extension of the brand, but not use it as a crutch.

Don’t design that chart just because you like it. Use it only if it’s relevant and accurate. Imagine receiving an Excel file with plain data and being granted a task to represent it visually. Do you use a table or a diagram? Is one number more important than the other? Are the values positive or negative? 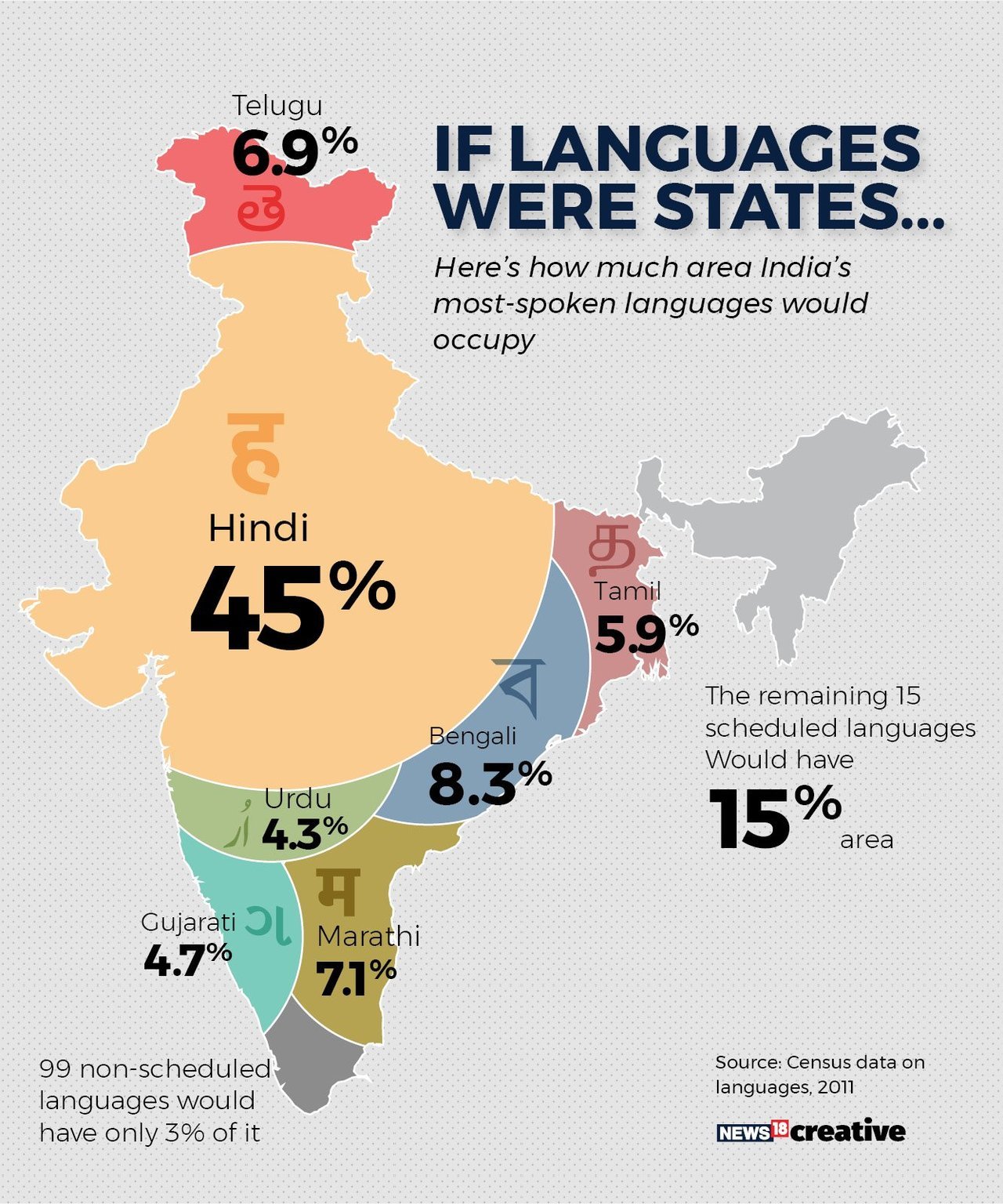 Sometimes, showing off is equally bad as going for the trite bar charts.

For businesses and designers, it’s tempting to visualize the data in the “familiar” way – for example, go for a bar chart when another form might prove more valuable. Each piece of data tells a different story and if you want to properly translate it into images, you have to consult, discuss, and ask questions. Help from a data analyst or a data scientist is priceless because a better understanding of data is always well worth the investment.

If the product being designed needs to serve in everyday work and influences real-life decisions, it’s crucial to test with actual users. If a music streaming app shows statistics regarding the genres you listened to most often throughout the year, it’s fun – because you might find out something new about yourself – but not necessary. On the other hand, if a nurse doing rounds on their shift needs to know which patients received their meds and which have not, proper data visualization is crucial.

Checking if the information displayed within the app is used correctly is very important. It puts your assumptions to the test and has the potential to not only provide new insights but also push for new solutions. For example, it might turn out that a training program is needed for the end-users. Maybe the initial assumptions were totally wrong and nobody noticed or there was a lot of bias behind project decisions regarding data visualization design. A strong UX team with a good process will help you solve these issues and deliver a product that serves the right people.

This one is about walking in other peoples’ shoes and is particularly essential for designers. What we think is the right solution for a product, might not be the best for the end-users. I remember when I was designing a machine management system and – being a sci-fi nerd – I wanted it to give the users the feeling of operating a spaceship. Cool for me but not very helpful to the actual users. Thankfully, I was a part of a great team that helped me to interpret the users’ reality better.

Always check your knowledge and intentions with the design. Aim to design excellent and aesthetic solutions – but don’t design just for yourself. The target audience always knows if the product has been designed for them. You can elevate somebody with the design but you can also accidentally intimidate them and stop from ever using it. Going with “it’s a good design, they just don’t get it” won’t cut it.

Think about the data that is being arranged – is it important to know at a single glance that everything is operating smoothly? Is digging into the details right away more valid? How critical it is to be notified about changes?

The story the data gives should lead to how it is being presented. It’s substantial to construct the design in a way that emphasizes the right thing and adjust all the visual and structural components accordingly. People’s time has its price, so if they need to focus mostly on critical changes, don’t overpopulate the design with elements and visual values that will make it hard to notice those changes. Focus on the path the user will take to identify information on a screen and arrange it according to that key.

One the one hand, too much data can be overwhelming. On the other, sharing only pieces of information can do more harm than good. That’s why finding a golden mean is crucial – and in case of data clarity, it’s all about following data visualization design best practices. Applying the rules I mentioned above will surely help you and your users comprehend even large sets of data in no time.

To finish off with one more argument for the importance of proper data visualization, let me quote Edward Tufte – or, as the New York Times called him, the Leonardo da Vinci of data: “the essential test of design is how well it assists the understanding of the content, not how stylish it is”.

As the saying goes, the devil is in the detail. See how our designers ensure these details are pixel-perfect and usable.