From AI to Cloud, there are as many software development trends predictions as there are people. The diversity and complexity of the IT world make compiling an exhaustive forecast nearly impossible. That’s why today, we’re bringing you our choice of backend technologies that can benefit you at the beginning of 2021. Sit back and enjoy!

Let us start with Python: a high-level dynamically typed programming language that has been gaining momentum in the IT world for quite a while. Conceived and first implemented around 30 years ago, it remains (compared to last year’s CodinGame 2020 Developer Survey) the third best-known and most in-demand programming language in the contemporary developer community. 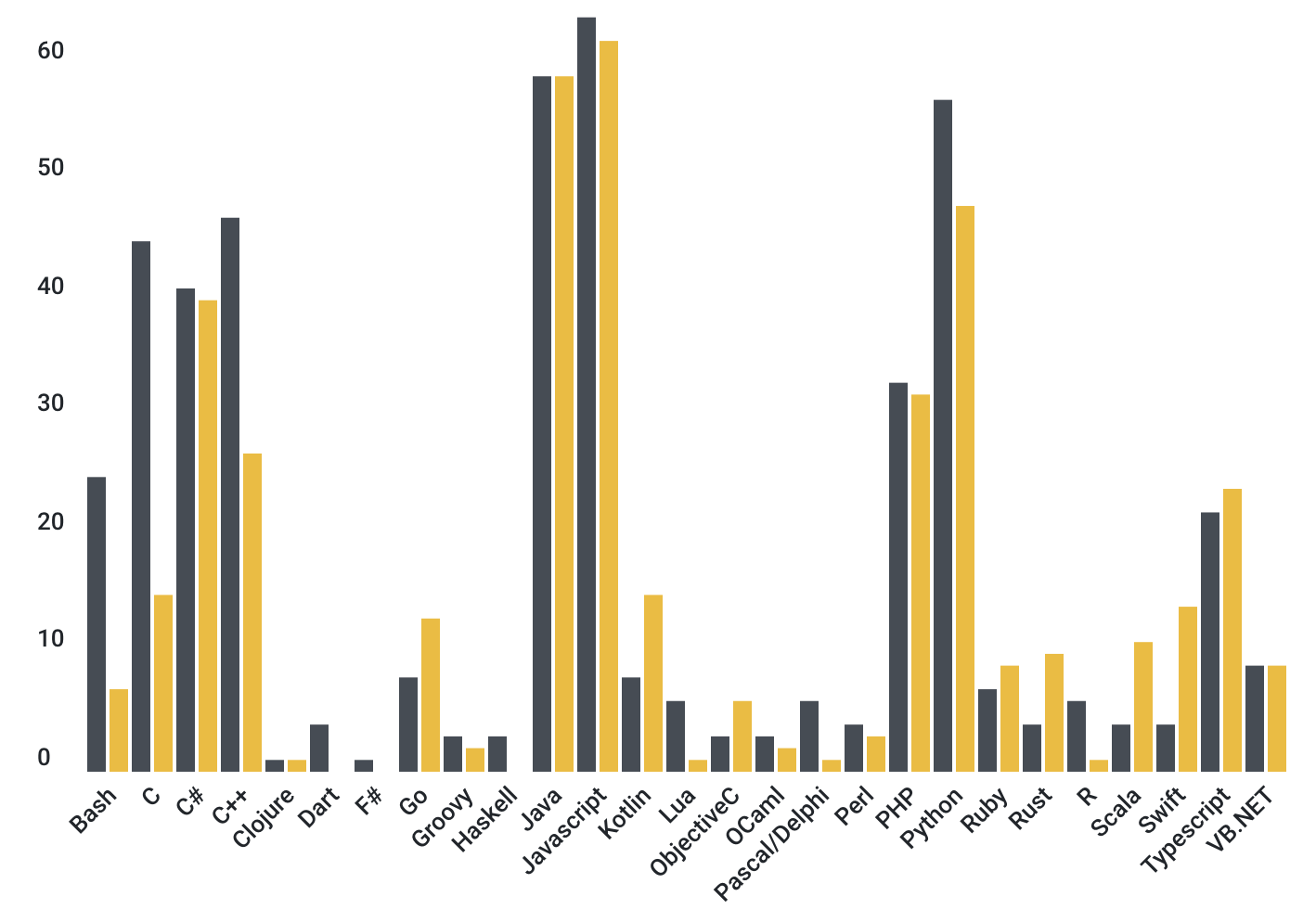 So what exactly makes Python one of the best backend development choices you can make in 2021?

If you’re about to kick off your software development project, popularity is surely one of the factors you need to bear in mind. Regardless of whether you want to assemble a knowledgeable in-house team or find a reliable tech partner to support you in building your product, going for a widespread technology will surely help start the development process much faster.

One of the reasons for so many programmers cherishing Python is its simplicity. Python’s syntax resembles that of the English language which makes it straightforward and concise. It also doesn’t require developers to use low-level functions like memory management to get more advanced work done.

To give you a practical example, if you were to code the same functionality using Java, it would take three to five times longer than coding it with Python. The equation is simple here: fewer lines of code mean faster development and easier maintenance.

The third reason why picking Python for backend development in 2021 seems like a good idea is the plethora of frameworks and libraries which allow developers to automate the implementation of certain tasks and, as a result, put greater attention to the application’s business logic. As every framework responds to different kinds of needs, its choice should be made based on project requirements. Today, however, we’d like to recommend two in particular: Django and Flask.

The former is a high-level web framework which is said to be the go-to solution for perfectionists with deadlines. What does this claim mean in practice?

If Django seems like an overwhelming monolith to you, an alternative you should consider going for is Flask. It is a microframework which – offering only the basic tools and capabilities – ensures flexibility and gives developers greater control over which components they use and how they’re implemented. In other words, Flask is a simple yet extensible solution that will work best for smaller projects requiring a greater degree of customization.

When is Python the best pick for backend development?

Python is capable of unleashing its full potential when used in web development, machine learning, and fintech. Moreover, thanks to its scalability, it also proves to be popular among startups. You can check a whole range of Python’s applications in our extensive guide on what's it used for. So as you can see, regardless of whether you’re looking to build a large or small digital product, chances are, you’ll find a relevant Python framework and a knowledgeable team pretty fast.

However, when looking for a tech partner who’ll help you launch your Python project, remember about one thing: make sure they are working with Python 3.9, as it contains all the newest features.

The second suggestion for backend development in 2021 is a statically typed, compiling programming language: Go, also known as Golang. Released in 2009, it has been named the Programming Language of the Year by TIOBE twice so far and – while it’s surely less popular than the above-mentioned Python – it’s been mentioned as the fifth most loved technology by 62.3% of the Stack Overflow survey’s respondents in 2020. 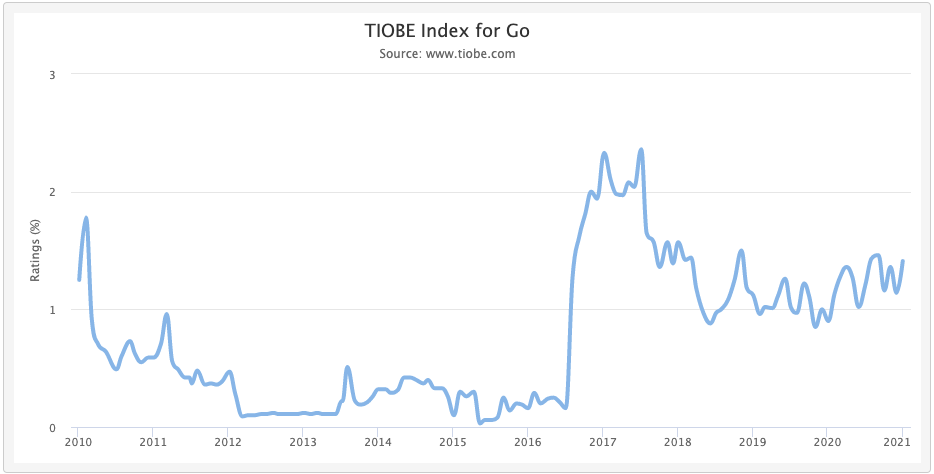 So why exactly do we place it on our list of suggested backend development solutions for 2021?

To begin with, Go is easy to understand and use not only by a programming newbie but also by an experienced developer. One the one hand, if you take a look at its specification, you’ll notice that its syntax is simple and it shouldn’t pose too big a challenge to the young IT specialist. Moreover, on the Go website, there is an interactive Tour of Go you can use to get acquainted with the language. On the other hand, the simplicity of Golang’s code makes it easy to adopt by professionals skilled in different programming languages, such as C# or C++.

This is one of the major benefits of Golang as it has a profound effect on the smooth and effective functioning of the app. To put it shortly, concurrency makes it possible for two or more processes to run simultaneously yet independently of one another. In the case of Golang, concurrency pertains to the parallel running of functions and is facilitated by goroutines and channels (you can read more on that topic on the Golang Programs website).

Ginny: our parking management app with backend written in Go

Gin Gonic: one of the top Go’s frameworks

Much like Python, Golang is also supported by several frameworks such as Martini, Revel, or Goji. If you’re looking to take your Go backend development to the next level in 2021, we suggest choosing Gin – a minimalistic web framework with 45.2k GitHub stars.

Including only the most essential features, it is quick to learn and perfect for building efficient REST APIs which are said to perform 40 times faster than those of Martini. What’s more, Gin seems to be a pretty good option for building microservices which – from the business perspective – are capable of significantly increasing the time-to-market of your product.

Used by 60% of professional Android developers, Kotlin has a strong position in the programming world. According to Sagara Technology, some of its benefits lie in Kotlin being a code-concise language and an answer to common developers’ problems, e.g. null references. It keeps all the advantages that come with Java, at the same time offering a short version of this language. Kotlin also catches the spirit of today’s SSR development. As the Kotlin Roadmap shows, it will have increased support for server-side development, which as such is extremely important for today’s website performance and user interaction.

Want to know more about how Kotlin fits into 2021 software trends? Read this insightful piece!

According to JetBrains, Kotlin Multiplatform sparks interest among mature programmers (with 61.4% of the surveyed Kotlin developers having 5+ years of programming experience). 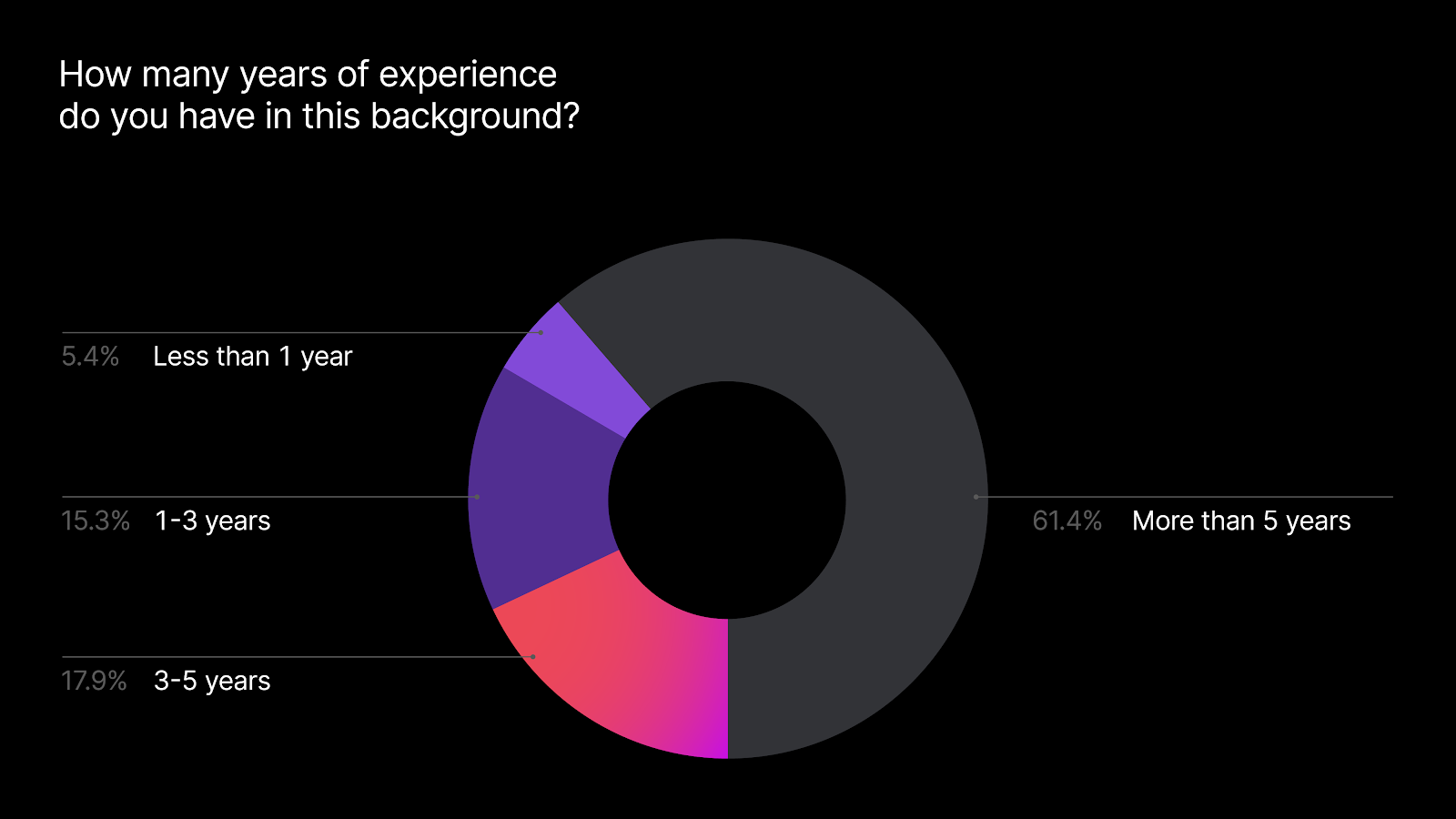 The same survey indicates that it is a language preferred by developers with Android experience – correlating with the fact that it’s an officially recommended language for Android development. 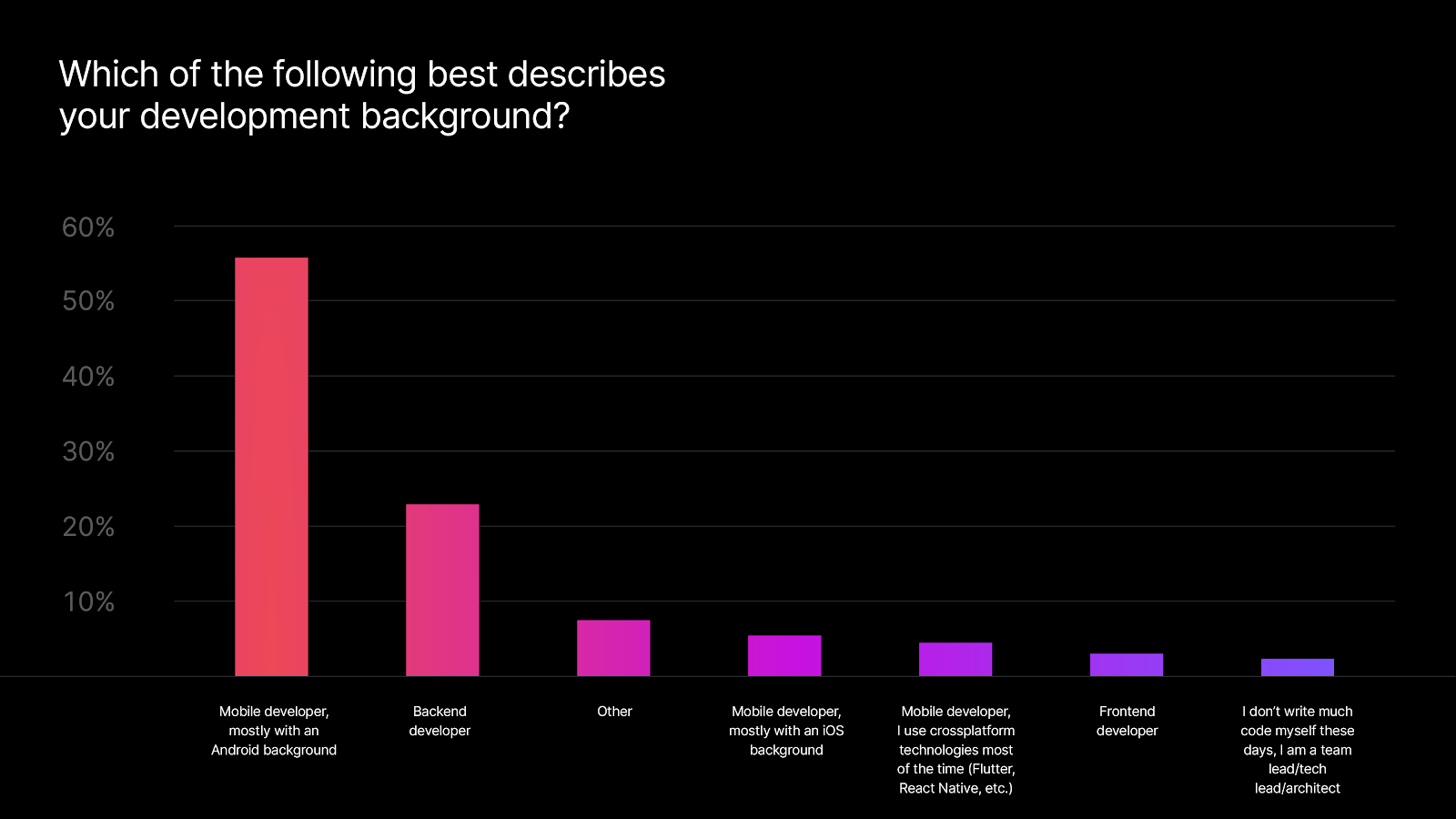 According to JetBrains, Spring is the most favored Kotlin-supported framework, with roughly 50% of all JVM-based projects utilizing it. It is used by 16.4% of the respondents, according to the earlier cited StackOverflow Survey 220. Its popularity is derived from the uncomplicated and effective solutions it employs. One of them is dependency injection and inversion of control, thanks to which dependencies are clearly defined and requirements resolved easily.

Wait a minute, hasn’t this article been mostly about programming languages so far? True, unlike Python or Go, Node.js is a runtime environment. However, drawing from our own experience, we can assure you that leaving Node.js out of this guide for consistency purposes only would be a mistake. Why is that?

Enjoying all the benefits of JavaScript

Let’s start from the very beginning, namely the fact that Node.js is a JavaScript-based solution. Therefore, using it for backend development in 2020 allows you to enjoy all the benefits of this high-level programming language, the most important of which is its immense popularity.

Just to give you an idea, in its Annual Survey of 2019, Stack Overflow has – for the seventh time in a row – named JavaScript the most commonly used programming language. It shouldn’t come as a surprise, then, that adopting Node.js as part of your tech stack, you’ll get to choose the best from the wide talent pool of skilled JavaScript developers. 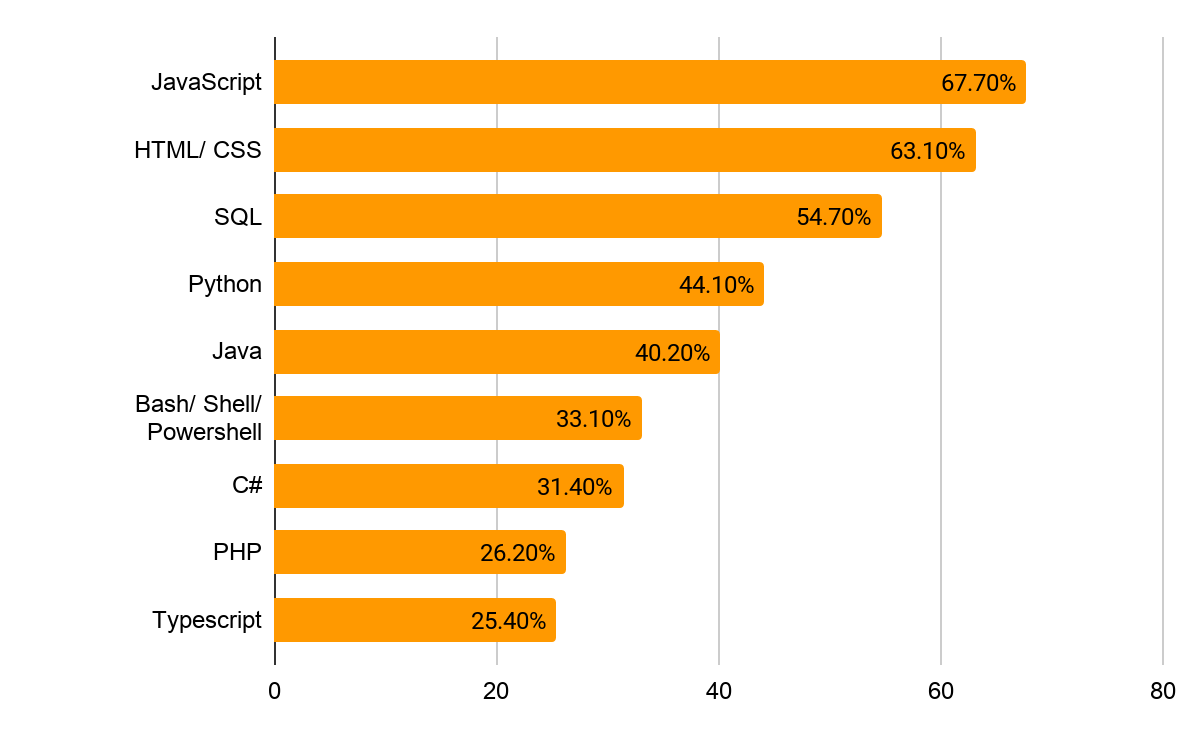 Another argument for picking Node.js for backend development in 2021 is that it guarantees the ease of scaling your product in two ways. On the one hand, it gives you the possibility of scaling it vertically by adding new resources to the existing node. On the other, it makes it easy to scale the app horizontally with the addition of new nodes.

Speaking of scalability, Node.js is also a great tech choice for microservice architecture.

Check how to build microservice architecture using Node.js and Moleculer.

As it facilitates building separate components that easily complement the larger application, Node.js allows for saving money at the initial development stages, thus potentially shortening the time-to-market of your product. This feature alone makes Node.js an advisable backend development choice for MVPs as well as other scalable applications susceptible to high-traffic.

Last but not least, Node.js offers the benefit of improved performance. All thanks to being built on Google Chrome’s JavaScript V8 engine – it compiles the code directly into the machine code which results in its faster implementation. On top of that, Node.js supports the non-blocking Input/Output operations. It means that rather than being executed sequentially, the requests are processed asynchronously. This, in turn, leads to the shortened response time.

Having decided on the JavaScript runtime for backend development, you’ll be soon wondering about the right framework to complement it. Our pick for the beginning of the new decade is Express – currently, the most popular Node.js framework that boasts 76.1k stars on GitHub.

As stated on the framework’s website, Express.js is a fast, unopinionated, and minimalist solution. It provides programmers with a thin layer of powerful web and mobile app features: not too many but just enough to facilitate the backend development process. What’s more, getting on well with numerous middleware modules and not imposing strict rules on the way respective tasks are handled, Express gives developers flexibility and freedom to choose the most convenient solutions.

Now that we’ve shown you how to step up your backend game with Python, Go, Kotlin, Node.js, and their frameworks, we need to make one thing clear: at the end of the day, the choice of any tech stack is project-dependent. It’s the product vision, business objectives, and the actual users’ needs that determine which backend development solution will work best for you.

So if you’re planning on building a disruptive app in 2021, let’s think about the best tech solutions together!

March 29, 2021
Outdated software slows down your growth? Bet on modernization!
X
READ WHITEPAPER
Don’t put off modernization any longer!
The only constant in life – and software development – is change. The trick is to modernize without disrupting your business’s growth. How? Learn by reading Modernize and grow! READ WHITEPAPER
X