The startup world is full of not only excitement but also uncertainty – after all, the early-stage venture failure rates are around 90%, with 21.5% of businesses failing in the first year and 30% in the second year. While there’s no one magical formula for success, we believe there are certain opportunities and hardships that most founders will eventually come across, regardless of the industry they’re in and the solution they’re planning to deliver. And what better way to identify them than by talking to successful entrepreneurs?

When working on our State of early-Stage Startups 2021 report, we sat down for a chat with Wojciech Radomski, the co-founder and CEO of StethoMe®. We discussed the Polish HealthTech startup’s road to success, relationships with investors, and best pitch deck practices. So if you’re looking for actionable insights and pro tips from an experienced founder… you’ve come to the right place!

Wojciech Radomski a Strategy and Business project leader with more than 13 years of IT experience. He successfully launched and managed a software house and 3 technology start-ups, one of them being StethoMe®, which is about to revolutionize healthcare. He is interested in things, which are crucial socially and advanced technologically.

Merixstudio: You’ve come a long way since the beginning of StethoMeⓇ in 2015. Do you remember your first investor meeting?

Wojciech Radomski: Our first meeting was pretty unusual. When launching StethoMeⓇ in March 2015, we were still working in different companies: three of us in Programa™ and the remaining two at the university. We were sharing our time between two businesses.

For some time, we tried to secure EU funding – unfortunately, in vain. After a couple of months, we knew we didn’t stand a chance because early-stage startups rarely raise funds from the European Union. We didn’t want to lag behind the competition, so we turned to investors. One of them was SpeedUp Venture Capital Group, which I already knew because I used to be their tech partner. I met Tomek Czapliński (Managing Partner at SpeedUp) on a train and told him about StethoMeⓇ. He proposed that the fund support us – which happened after I presented a pitch deck to them a couple of months later.

Today, I’d do things differently. I’d put more effort into the presentation, and I’d meet more investors, especially the international ones. We’re grateful for SpeedUp’s support, and we really enjoyed this collaboration. The thing is, international investors give you a head start if you seek international recognition. 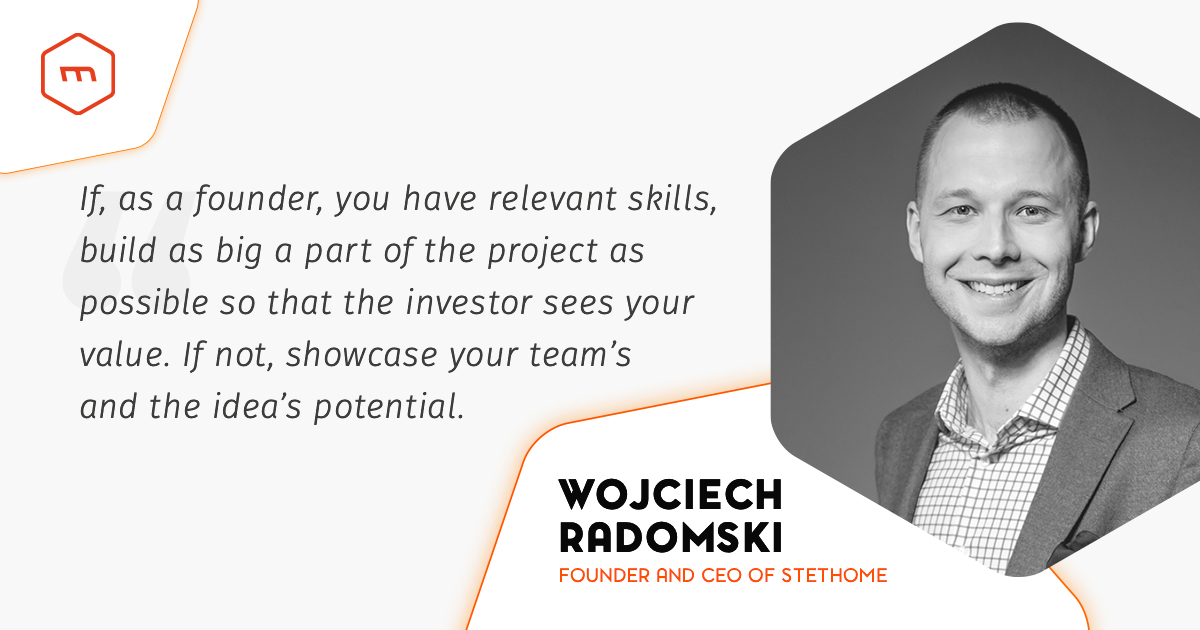 Your first partner was SpeedUp, a VC firm. Usually, founders start with friends, family, or business angels. Your path was different. Bearing that in mind, what would you advise an early-stage founder? Should they try getting VCs on their side?

It depends on their goal. We needed VC’s support because our project was complex and called for significant financial support. We secured 1.5M PLN in the first funding round, and I can’t imagine getting this much from friends, especially if you have no prototype to show them.

A tech founder who can build an MVP in three months on their own will have different needs than we did. In our case, it was impossible to start working on the product without external financial support. If a founder has relevant skills, they should build as big a part of the project as possible so that the investor sees their value. If that’s not the case, the founder should focus on showcasing the team and the idea’s potential. In short, two early-stage ventures offering different solutions will always face different challenges.

Should founders focus on the cap table from the very beginning? Or is there something more important?

I wouldn’t worry too much about the cap table from the start. On the one hand, it’s worth knowing some best practices to not be fooled by anyone, e.g. a fund that’ll want to get 50% of the startup’s shares. On the other hand, respectable investors don’t set such traps for inexperienced entrepreneurs. I believe early-stage funders should have the roadmap of their venture at the back of their minds but focus on delivering features.

What was your most successful investor meeting?

Everything happened quite fast. When I learned about the opportunity, I was in Warsaw meeting other investors. I couldn’t reschedule these meetings so, in the end, we spoke for only half an hour. Luckily, this was enough to get Sebastian to fund StethoMeⓇ.

📚Wondering what investors look for in startups? Read our guide to find out!

How about less fruitful meetings? What did you learn from them?

To win the heart of one investor, you need to hold dozens, if not hundreds, of meetings. It all boils down to what you mean by a “less fruitful” one.

VCs have different strategies, so while they may like your idea, they won’t invest if it doesn’t fit their profile. Their actions are also guided by the requirements and goals of their own investors. I heard multiple times that my idea is great, but the project doesn’t resonate with the fund’s strategy – and that’s ok.

Fundraising calls for constant change. You may have certain assumptions initially, e.g. wish to collect $5M for 20% share, but meetings can prove you wrong. That’s why you need to listen to investors’ feedback and revamp your pitch deck accordingly – even if it means turning it upside down.

How did investors’ expectations towards StethoMeⓇ change over time?

I don’t think it’s right to talk about investors’ expectations towards StethoMeⓇ. Our business is like a car driven by ourselves and investors. Since 2015, we have had to adjust our strategy to the market, but investors helped us do that. Rather than imposing expectations, our investors are more like partners who support us in setting goals. 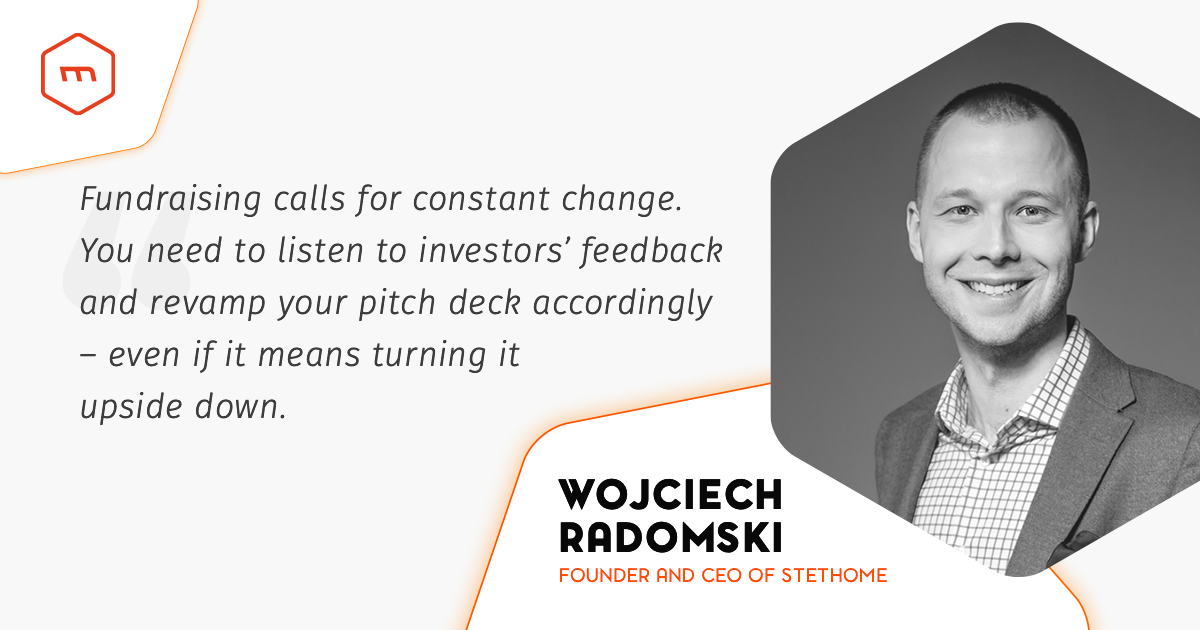 So do you consider your investors to be mentors? How do they support you?

Money is only one aspect of a startup’s existence. Everybody’s talking about smart cash, and they have a point – especially when we don’t have much experience in the industry we’re operating. That was our case as we moved from building software to creating medical solutions. Back then, we had no clue about medicine or scaling business internationally.

That’s why having a wise investor is crucial. Others offered us much more money, but TDJ Pitango added their expertise and support – which is why we chose them as our partner.

Do you have any advice for founders looking for mentors? How should they select investors to get not only financial but also business support and know-how?

It depends, so let me focus on our example. Without a cash injection, we wouldn’t be able to build a prototype in the first place. In such a scenario, it’s not only about the idea but primarily about the team. If you can’t present the investors with a product, you need to emphasize your experience in a given field. We had both IT specialists and scientists onboard, which underlined our multidisciplinary expertise.

Speaking of multidisciplinary expertise, it’s always worth covering all types of skills when assembling a team. Your team may include the best developers and scientists, but unless there’s a business-oriented strategist among them, investors won’t trust you. I often see inventors who want to revolutionize the world on their own, but they can’t raise funds because their perspective isn’t broad enough. When establishing a startup, you need to remember that however brilliant you are, you probably won’t have all the skills that matter – that’s why assembling the right team is vital.

You mentioned that your first pitch deck was simple. What did it include?

It presented the idea and proofs for our capability to deliver. In our pitch deck, we showed a strong team and multidisciplinary expertise. That was the only way for us to convince the investors that StethoMeⓇ will be successful, especially since we didn’t have a prototype.

How did you know to focus on these things and nothing else?

When I worked at Programa™, I was also a CTO at ITraff Technology. Once I had to prepare and present a pitch deck in Berlin… and I won the best presentation award despite having minimal experience in creating pitch decks! It came naturally, I just knew intuitively which parts mattered and which didn’t.

When creating pitch decks, you need to focus on how the content fits the context. Take a walk in the investor’s shoes and guess what they’ll want to know. Ideally, once you finish your presentation, investors’ won’t have any questions. They may be interested in your idea or not, but they have all their doubts dispelled by you.

How did your pitch deck evolve? Did it include a prototype at some point?

Prototype and live demo were key during our last funding round. Holding such a demo is risky because anything can go wrong – but it also proves that your product works. A prototype is real, and nothing explains your business idea as well as a tangible iteration of your product.

When pitching investors, you should also care not to bore them. In general, investors have little time, and they don’t want to spend it on yet another presentation. If I talk to them for an hour, they won’t even bother to listen. But if I run a 5-minute demo and show that StethoMeⓇ can solve real problems and change children’s lives, that’ll do the trick.

Is there any other pitch deck WOW factor that can help you stand out from the startup crowd?

It depends on the industry and the venture’s maturity. The WOW factor most investors care about are sales figures. Your ever-growing monthly revenue is undoubtedly a showstopper. We at StethoMeⓇ have recently started to sell our solution, so we’ll have to focus on traction, costs, and profits instead of a demo and prototype during the next funding round.

Is it worth looking for external support when creating a pitch deck?

Definitely! For sure, try talking to more experienced startuppers who’ll happily share their experience. Then, it’s worth investing in design – we did that at some point, and it still bears fruit. You can also look for a reliable tech partner who’ll lay a solid foundation for your venture’s future growth. I’d also recommend taking presentation classes. We did that during an acceleration program, and since then, we’ve won practically every pitching competition.

So it’s not only about what you say but also about how you do that. 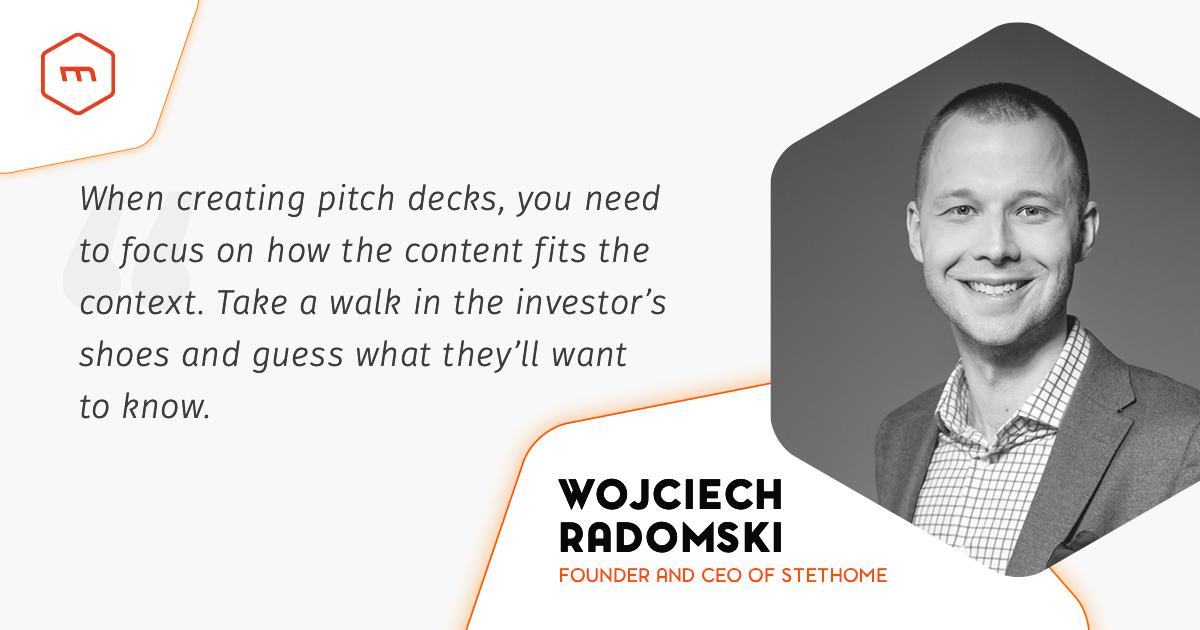 To finish off, what are your plans for the next year?

In December 2020, we launched B2C sales. It was a major pivot because so far, we’ve only sold B2B. In the following months, we plan to enter international markets and ensure that StethoMeⓇ can help people regardless of where they live.

Fingers crossed, then! Thank you for the interview.

StethoMeⓇ is now available to individuals clients in Poland. If you’d like to have it in your medicine chest to detect respiratory system abnormalities, be sure to explore the available subscription plans. Until the end of April 2021, you can use there a 10%-off code that StethoMeⓇ prepared especially for our readers: MERIX10.

Is your venture yet to repeat StethoMe'sⓇ success? If you need a helping hand, check out how our team of designers and developers can support you.

March 29, 2021
About to launch a startup? Learn how to make your journey safer and less bumpy!
X
READ REPORT
About to launch a startup?
Check out the State of Early-Stage Startups 2021 report! We hope that drawing on the insights shared by the more seasoned colleagues will help you, the early-stage founder, make your entrepreneurial journey safer and less bumpy. READ REPORT
X