Well, the truth is that AI and machine learning are part of our everyday life no matter if we are able to spot it or not. Guess what, it also makes our life easier but would it make your project work better or help you reach out to more customers? Let’s find out why it is often a good idea to implement machine learning in your project and why Python is the best choice for that.

What is machine learning?

First things first, without understanding the term, we won’t get rid of the foggy illusion what it could possibly be. Imagine a computer which can make decision and predictions based on the data you have given it before. The machine gets a sample of data (the quality of it is also an important factor) and through the algorithm which is analyzing it, the machine ‘learns’ (recognizes patterns in the data) - after that is able to make decisions or predictions. A step further is deep learning which can come up with conclusions similar to human-like decision-making pattern.

A simple example of machine learning is a spam detection algorithm or categorizing and labeling received emails, creating a product recommendation list and so on.

To make it clear, let’s name only a few real-life examples of machine learning:

Of course, machine learning or in general AI might not be a necessary choice in each industry but in many of them, it works more than fine. Take a look at the Future AI demand trajectory prepared by McKinsey&Company to get the point: 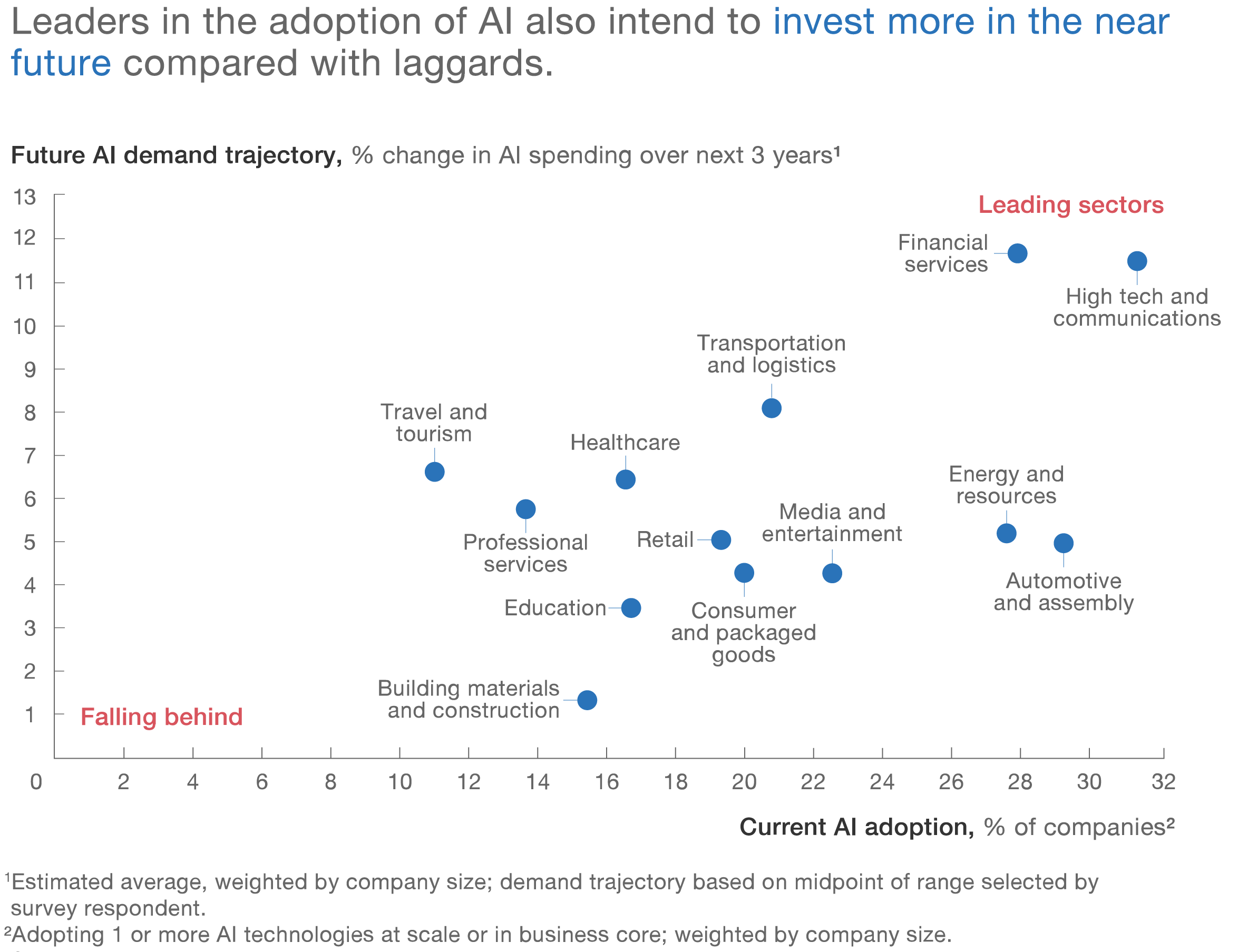 The challenge for a machine learning engineer is to first take the data, process it, clear it out and arrange, to finally develop intelligent algorithms which, based on the collected data, are able to make decisions on their own. Sounds time consuming and a bit tricky, right? This is when Python comes to the rescue!

We have talked about what is Python used for many times in many different scenarios, and yes, Python is also a great choice for machine learning implementation in your project.

There are two main reasons: its simplicity, as well as the full range of available libraries and frameworks.

Let’s start with the simplicity factor. When it comes to big data or just very complex decision-making path, the simplicity is the key. Python is well-known for its readability, developer-friendly syntax, and semantics. The less the developer has to worry about the code itself, the more focus and emphasis can be put on finding solutions. Let’s not forget, that writing the same code in Python, in comparison to the vast majority of programming languages, takes less time. Moreover, the Python community is huge and constantly growing, which is also a plus for a language. Not only the ability to take away the cognitive overhead from a dev team and its simplicity is guaranteeing Python the first place as a cutting-edge language for machine learning. What makes Python so suitable is the amount of ready, open source libraries and frameworks.

Applications built with Python, no matter in which area, have one thing in common. Instead of reinventing the wheel, Python developers use open source repositories and in this way save a lot of time and energy. Also, to make the process easier, there are great frameworks, just like Django, which help to deal with the project a lot.

Some libraries used in machine learning with Python:

There are many more Python libraries for machine learning and data science in general but those few mentioned above should give an overview on how many ready-made options there are and how much faster the process of finishing the project could be.

Python for the win

Depending on the project and its goal, of course, there are other languages, tools and frameworks which could be handy. However, due to Python’s simplicity, versatility and readability, it just makes dev team’s work lighter. Additionally, when the task is quite complex, the machine learning-focused libraries available for Python can save time and stress.