It was the 11th edition of PyCon PL conference organized by Python community in Poland. It's the biggest one Python event in our country, and this edition was the special one for Merixstudio. For the first time, we took part in the conference in the role of Silver Sponsor, speaker as well as a participant.

We arrived at the venue late in the day on Thursday. Much to our dismay and because of unforeseen circumstances we made it neither to Antonio’s Cuni presentation about PyPy and its performance nor to lecture about using Python with Amazon Alexa. But hey - every cloud has a silver lining! As some of us were still relatively new to Merixstudio, we used the remaining evening to get to know each other better and deepen the bonds within the team. 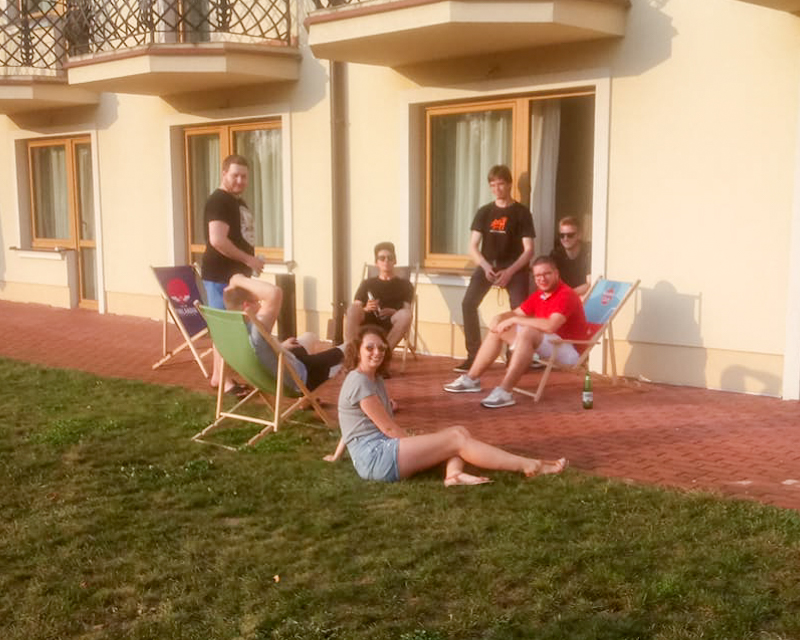 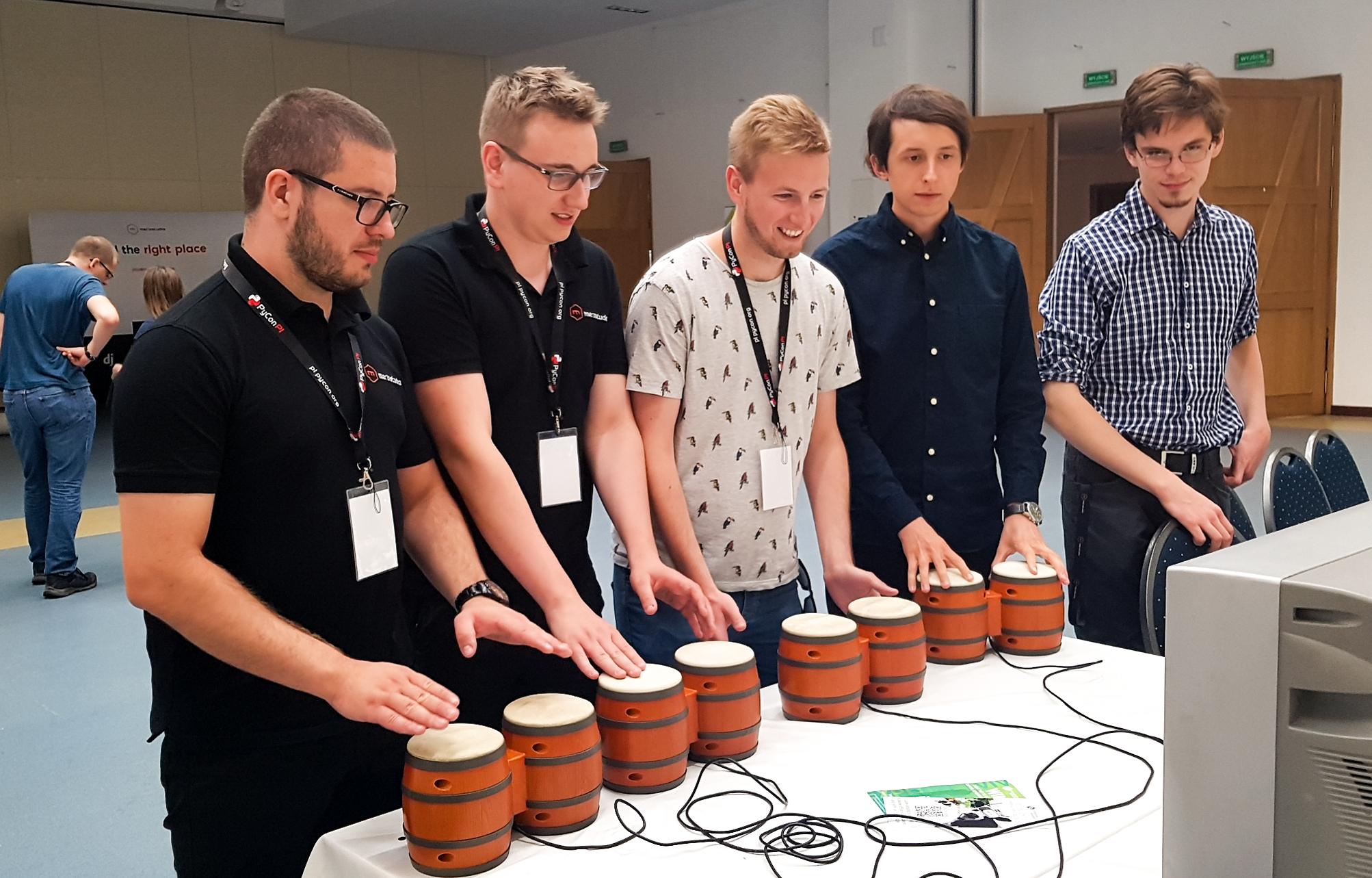 Merixstudio's contribution to the Python conference

The next day - Friday, was our big day, as for the first time in a PyCon PL history a speaker from Merixstudio was about to enter the stage and steal the show. Before that happened, we still managed to get our eyes on the subject of using Python with Azure. Despite the early hour, many people turned up to listen to honest talk about pros and cons of Microsoft’s solution, and how it compares to, e.g. Amazon AWS - by far the most popular tool among the audience. What we’ve heard sounded promising, and personally, I definitely want to give Azure a shot. 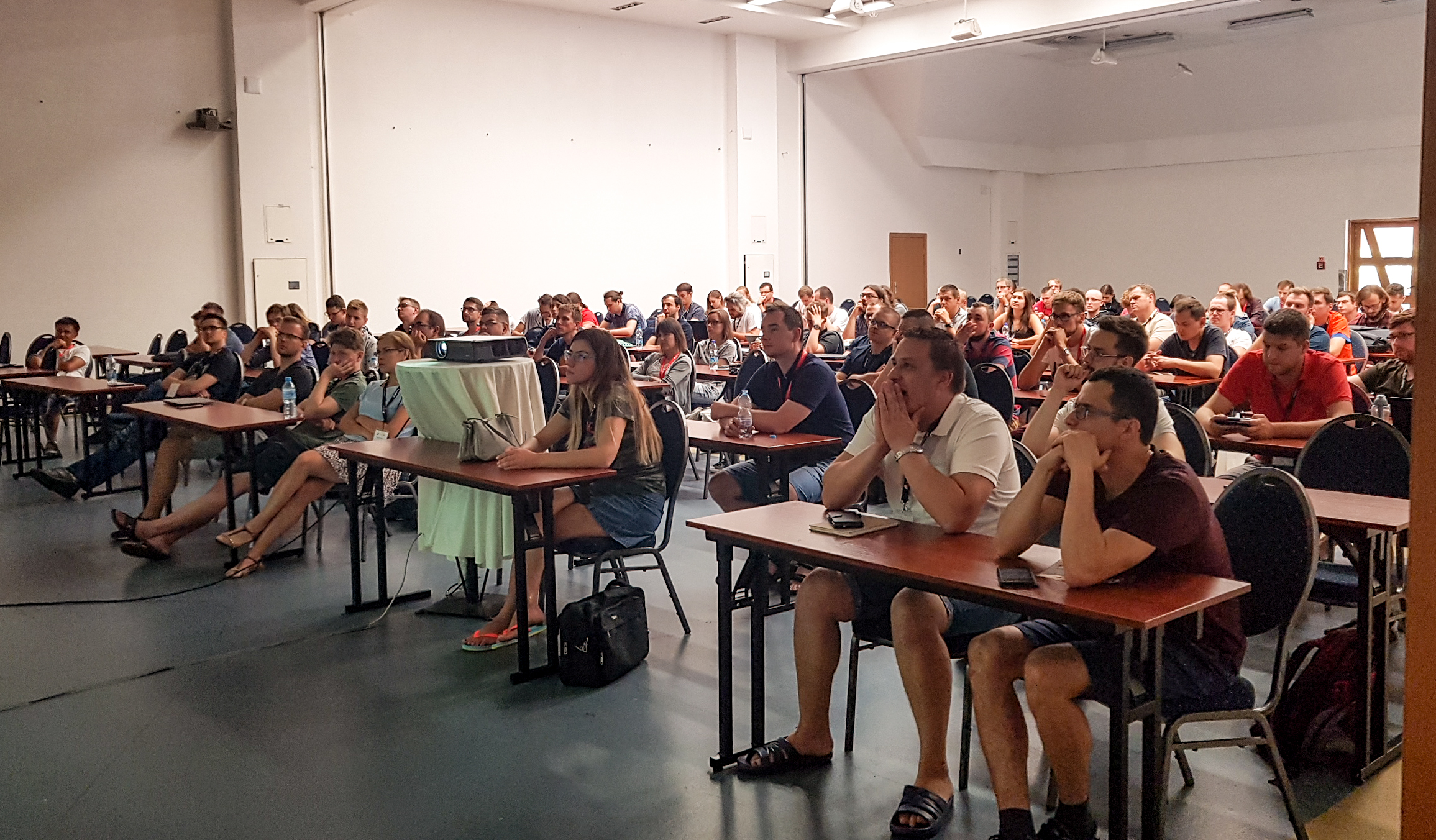 The next points in the event’s agenda split up the Merix team, as some of us went for “The Secret Arts of Successfully Teaching Coding to the Next Generation” and some for “Life with Python”. As the subject of bioinformatics is close to my heart, I chose the latter, and I can only admire Jacek Śmietański for his valiant attempt of bringing bioinformatics and biopython library to attendees attention. It’s not an easy thing to do and I hope it will inspire people to dig deeper into that matter, as no doubts - there are many neat algorithms and tricks out there that can be used to solve the variety of issues in other fields of science. 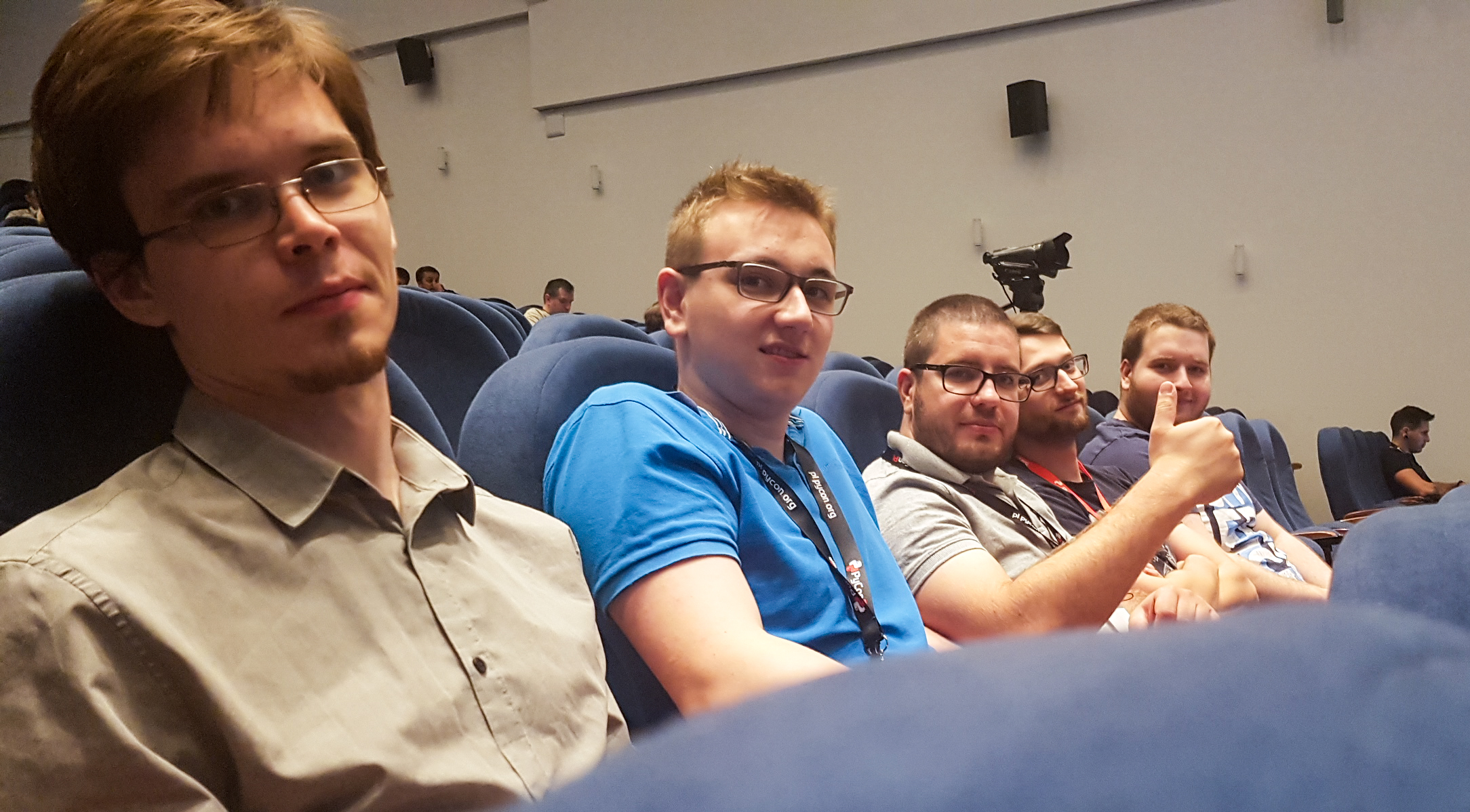 It’s high noon, and it’s time for the main course - the star attraction. On stage - Miłosz Kusiciel, Backend Team Leader at Merixstudio. “What will you do once you stop programming?” is the subject of his presentation, which is definitely reflected in the audience, as the average age goes up substantially. Despite that, the room is still crowded with people - seems like many are genuinely interested in this catchy yet serious topic. Miłosz picks up the microphone and yeeeeep… technical issues! It has to be an overwhelming experience both for the speaker and the audience, however, what looked like a catastrophe turned out to be funny and engaging crowd-controlled debugging of the problem. It seems all you have to do is to put a technician two steps away from a projector and all your issues are gone! 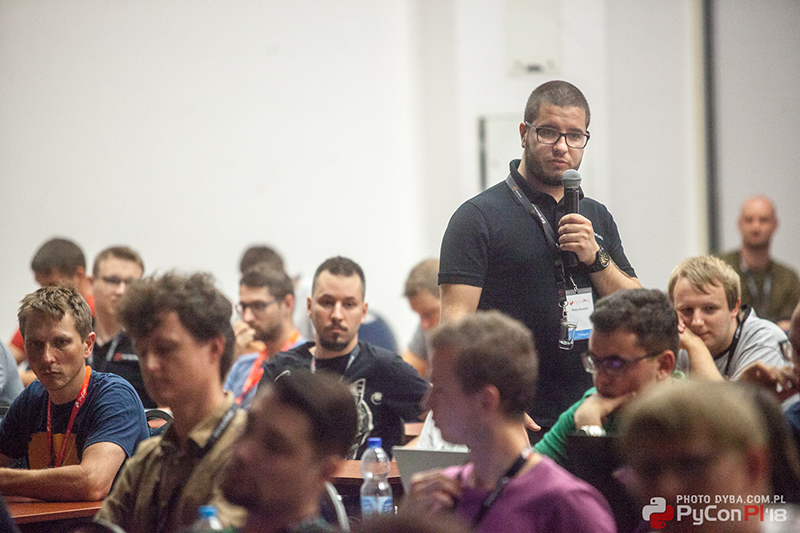 Miłosz can finally continue his surprising monologue. Instead of strictly adhering to the lecture subject he took an interesting spin on in and started off by presenting his career path, realising own strengths and weaknesses and how that impacted his further decisions. He just used the example of his career, because there is no definite answer to the question embedded in the title and as Miłosz says, there can’t be one. But while the speech continued, he gently reformulated it and then dropped some hints onto the audience as the food for thought. Judging by the Q&A session, being a Team Leader and managing other people is what many people seem to be interested in.

Interesting stuff that PyCon PL had to offer was not over though. “Cybersecurity in Python” by Christine Bejerasco gathered a lot of attention and praise from my colleagues (unfortunately I could not attend this one), however “Ansible in every kitchen” - a lightweight introduction to Ansible framework by Paweł Kopka and detailed lecture about namespaces in Python by Jan Kaliszewski made it up for me. 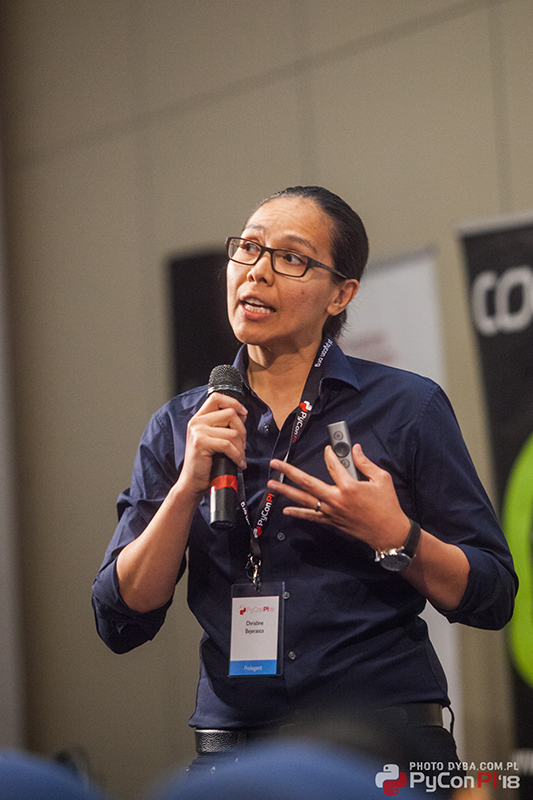 Saturday started with a really good speech by Konrad Hałas about type hints with a small unannounced section on dependency injection. This mechanism, while widely used in other languages (such as Java) is not typically seen in Python. While one might argue against it as not “pythonic”, it’s hard to deny its benefits in, e.g. writing test.

With schedule densely packed with lectures and workshops, decisions had to be made, and some of them had to be skipped. We decided on attending “from * import python”, a presentation on leveraging import hooks - a somewhat orphaned topic. Despite the lecturer’s effort, I have a feeling we walked out of the speech only slightly less confused than when we entered it.

Next on our checklist was “Clean Architecture” by Sebastian Buczyński, a presentation that really delivered both with its content and in Q&A session - lots of questions were asked and lively discussion sparked as a result. 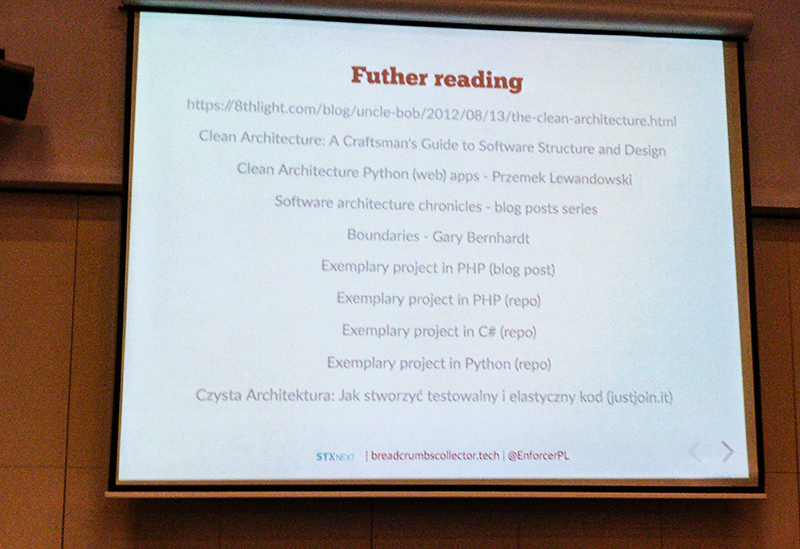 As the day went by, we also made a stop at “Pipenv and pyenv” by Piotr Gnus. While not much of it was new to us, we’re happy that both of this tools get a bit more of attention and recognition and we truly cheer for their respective developers!

We ended the day with “Data Security: A Tale in Three Parts” by Katharine Jarmul. As the title suggests, the presentation generally focused on security from point of view of systems engineer, software engineer and data scientist, and their respective roles in the aforementioned process. However, the reception of this lecture was quite mixed within the Merix team. Some of us were astonished, and some really disappointed by a too general overview of the matter.

Wait, did I say that we concluded the day? Not really! There was one last attraction prepared by the event organizers - open-air BBQ. Luckily for us, the weather was merciful enough and granted us a window of clear sky. Happy and stuffed we moved indoors to further celebrate PyCon 2018. 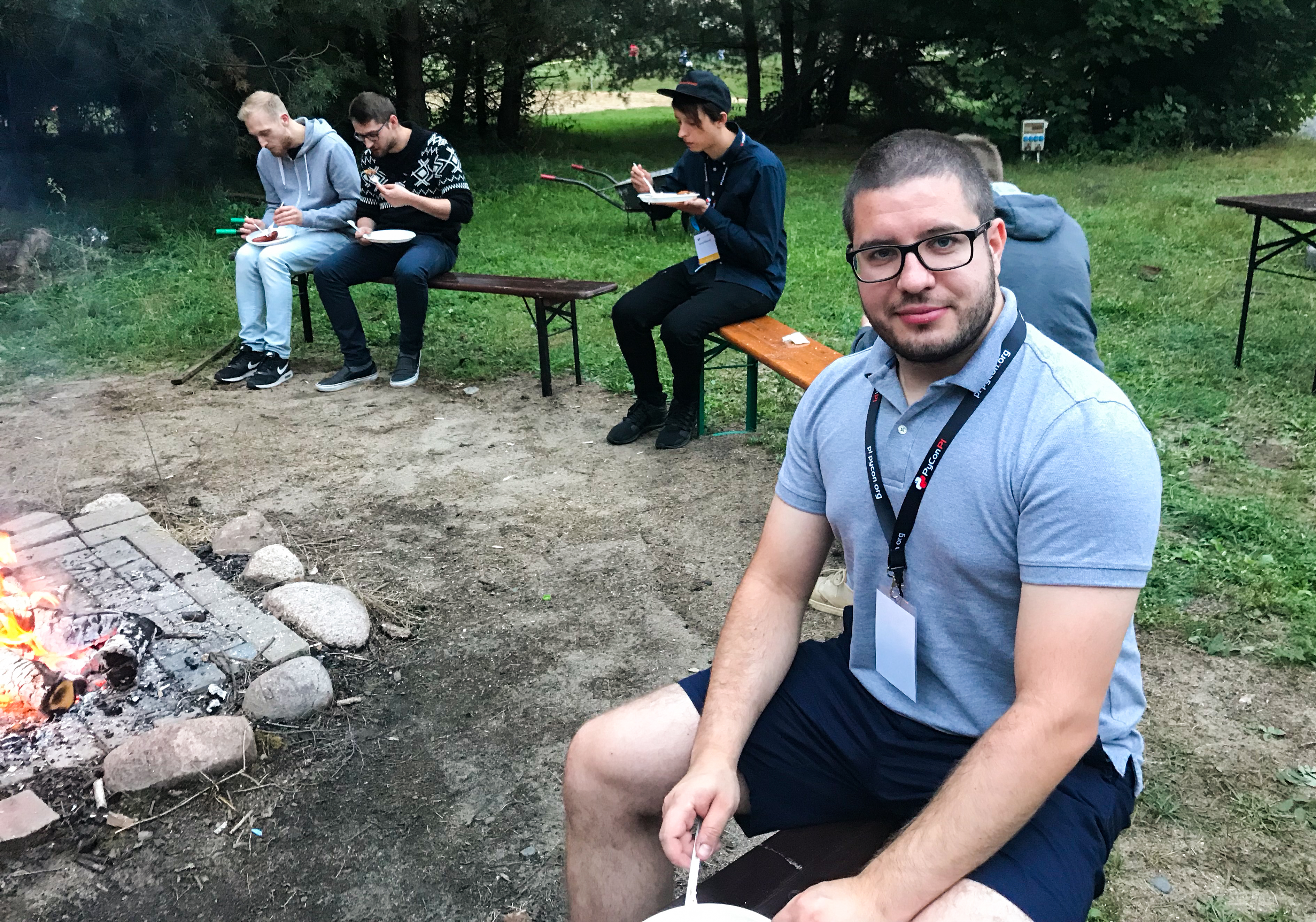 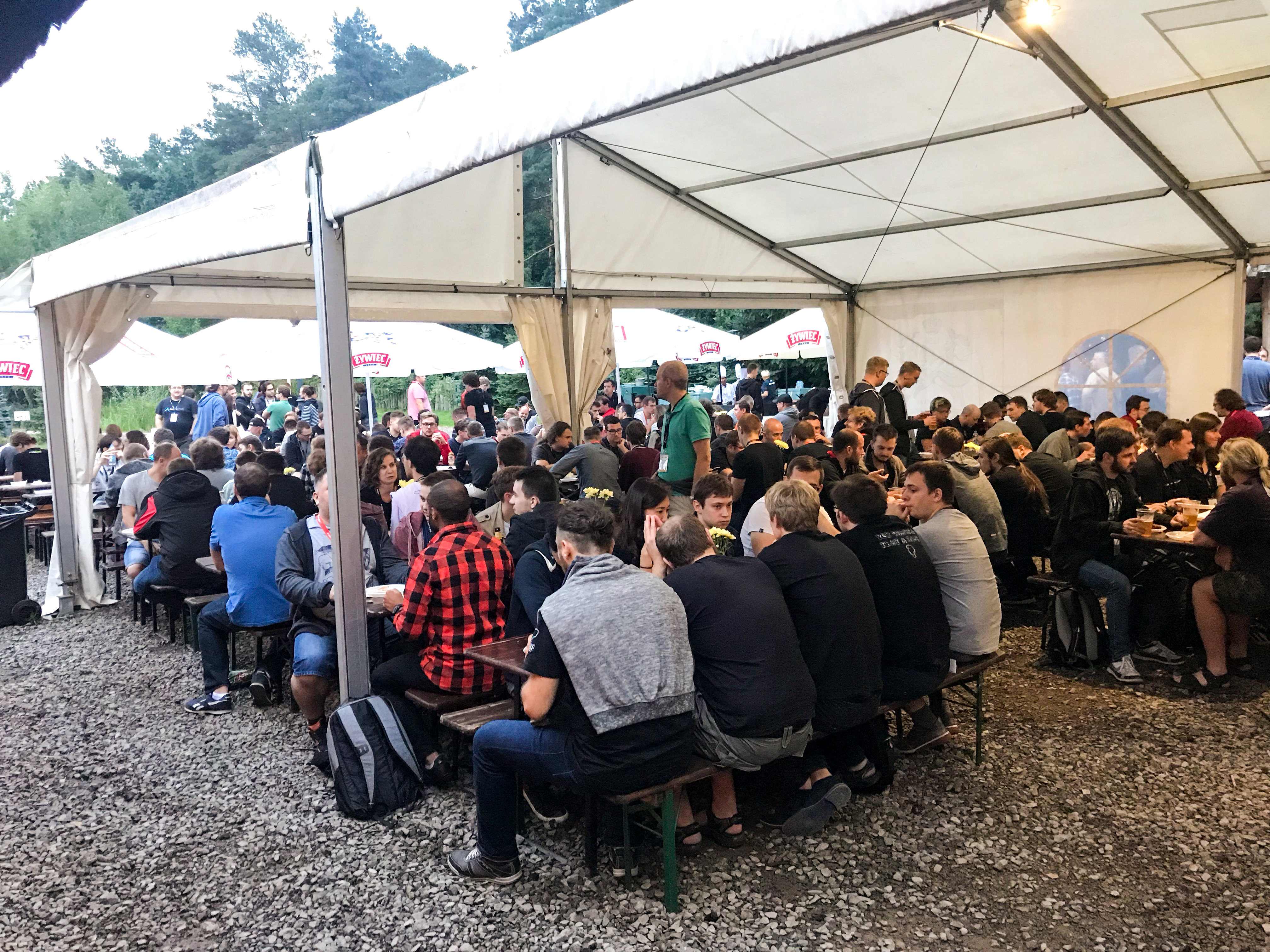 Sunday, while still plentiful in lectures saw us leave early. Tired, albeit wealthier in experience and knowledge, we departed for Poznań soon after breakfast. PyCon PL 2018 was truly a great event for best web development companies and all of us. Just like last year, during PyCon PL 2017 conference, we're really happy that we could take part in this year's edition as the sponsor, speakers and (most important) attendees. Again, we met a lot of new great people from the Python community. All we can say to all involved people is a big THANK YOU! 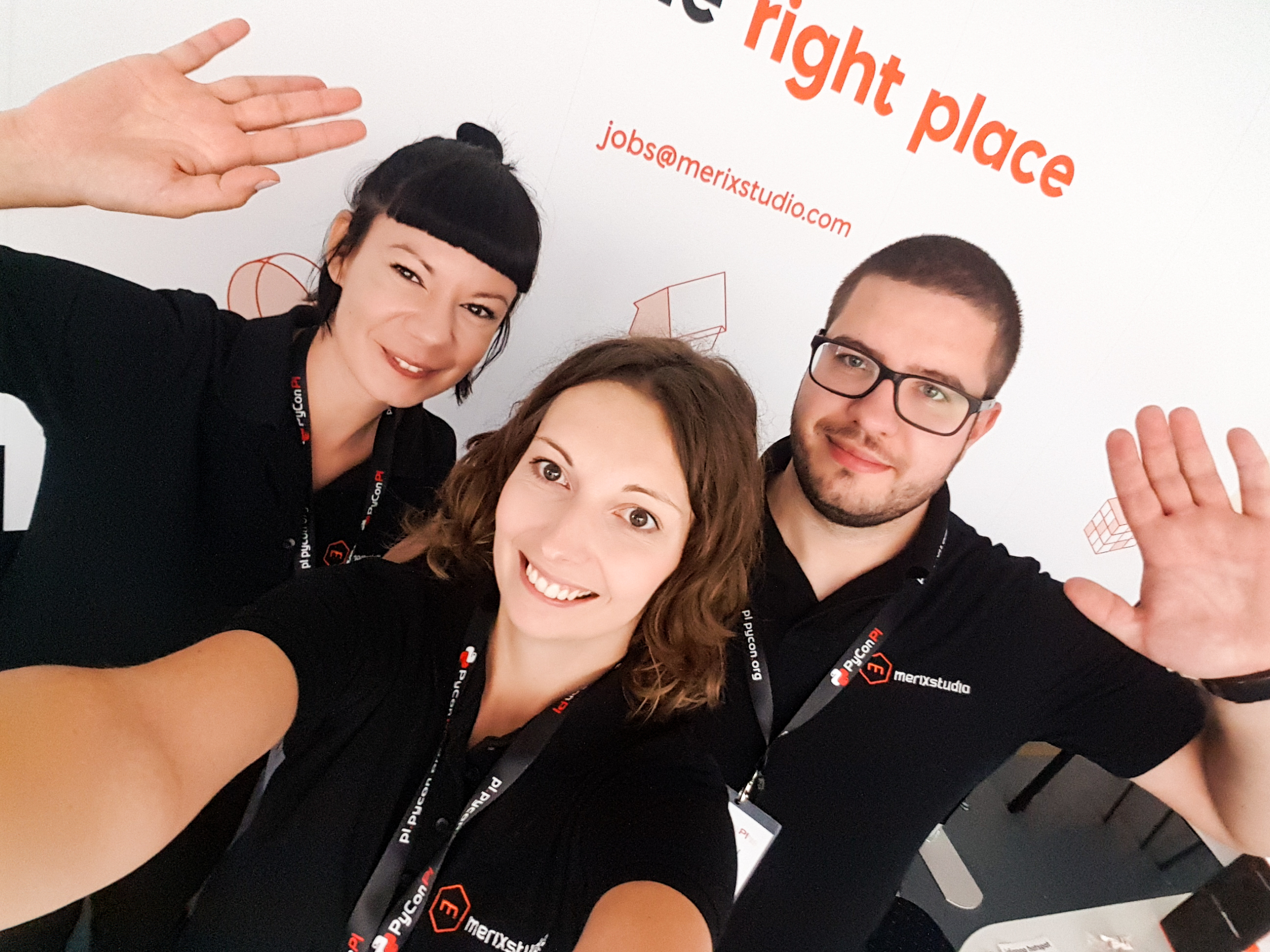 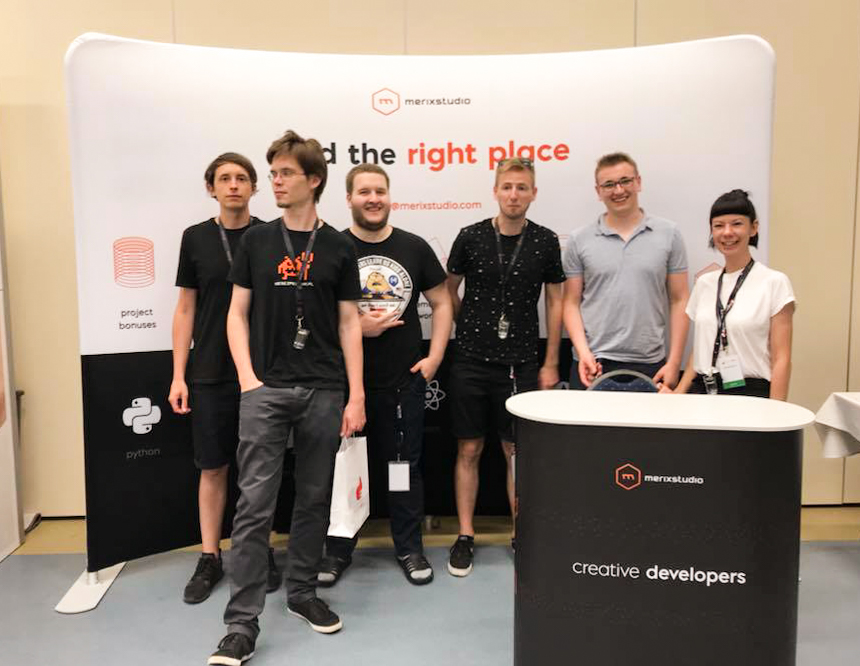 And of course - see you next year!