Tech Open Air, known as TOA, is a conference for, as they claim on their website, leaders from tech, art, and science that want to share their vision on how they see the world evolving. TOA can be divided into several pillars that were happening at the same time.

At the Haus of Tech, a 4.000m2 exhibition arena located in Funkaus Berlin (German: radio house), attendees could have a chat with exhibitors, attend workshops, or participate in a variety of discussions on the future of technology. Funkhaus also took a role of major art & culture facility, offering workshops and events for artists, as well as the possibility to or try out rare kinds of musical instruments. Several presentations and exhibitions also encouraged listeners to participate in an ecologic, no waste lifestyle - as you can see, there was something for everyone. 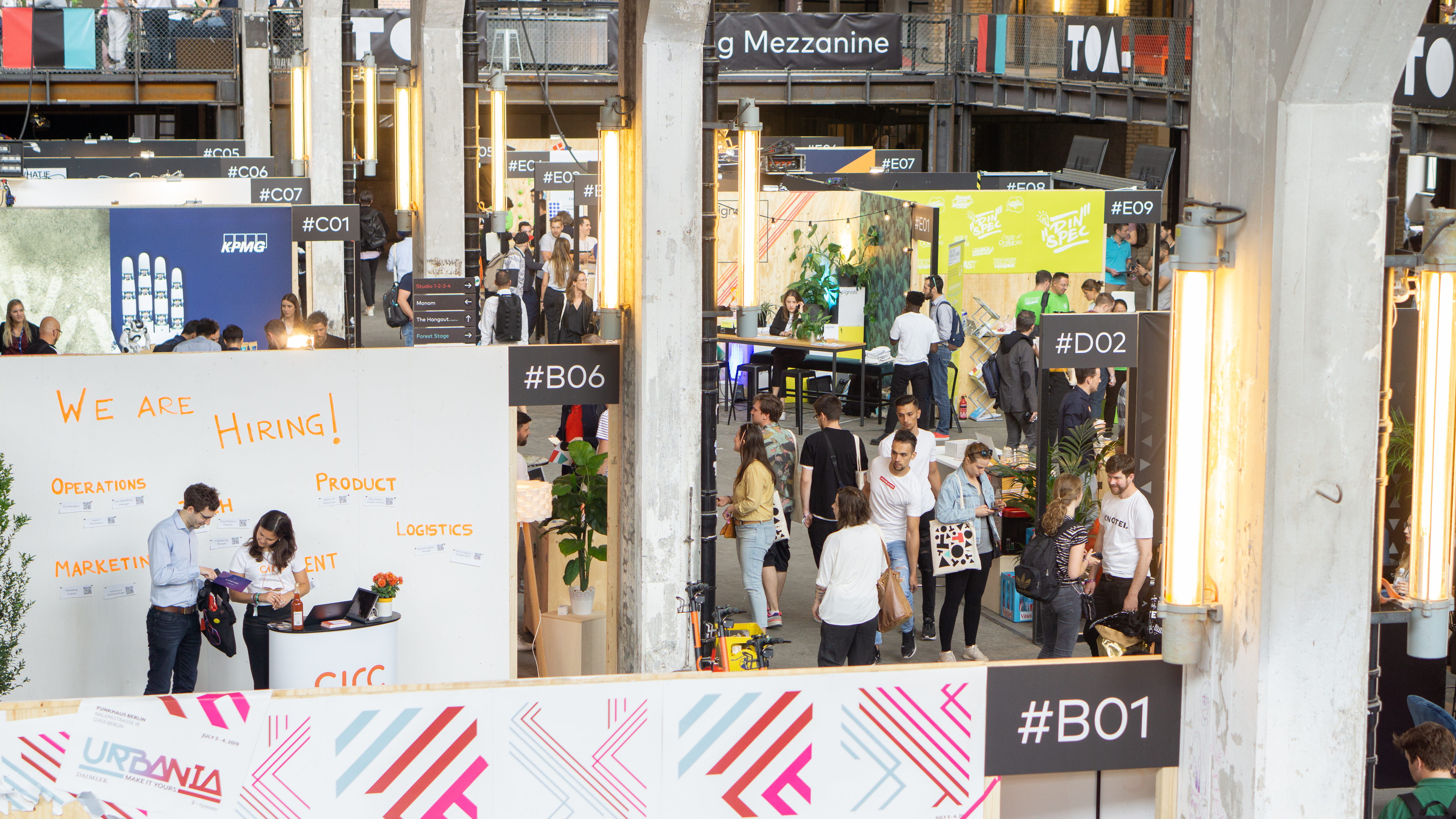 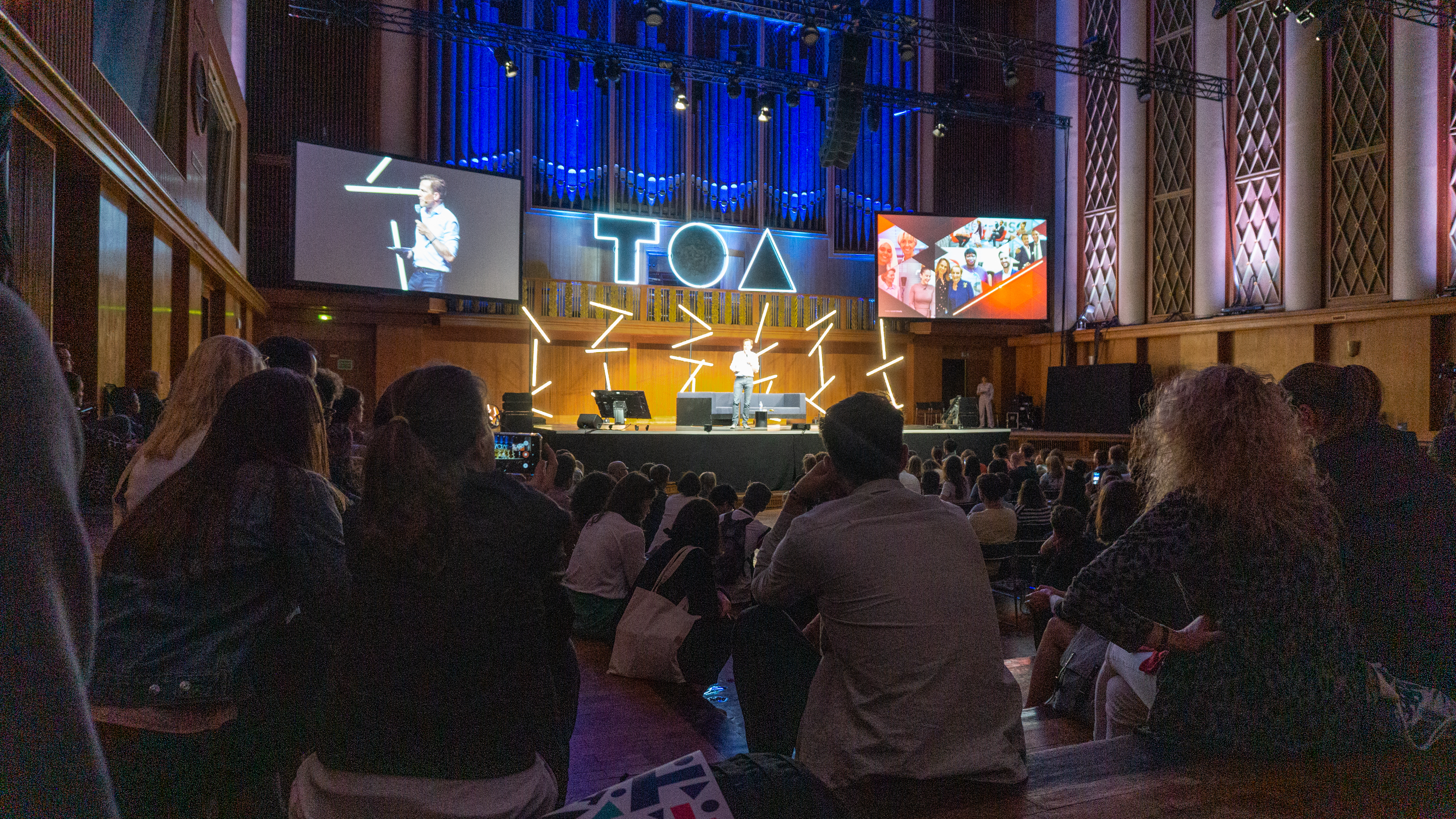 One of the impressive speaking stages 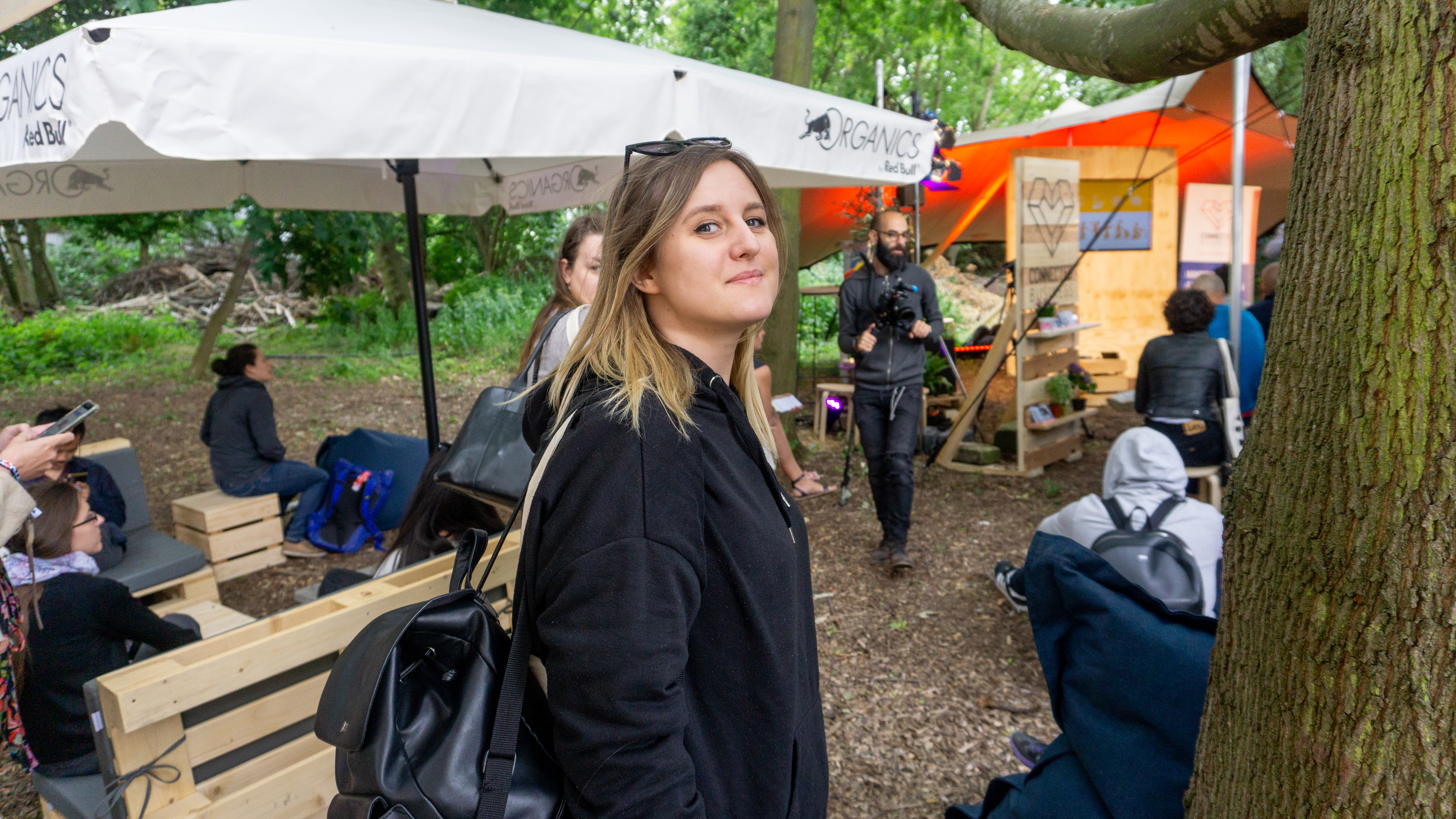 Simultaneously, you could also take part in satellite events, which touched on the variety of topics (from UX or failures to female empowerment) that were located all over Berlin. Hosted by different companies they usually included networking sessions, during which we could visit plenty of skyscrapers and see a whole panorama of Berlin. Here’s how we spent our week in Berlin and which parts of TOA’s vast offer intrigued us the most.

Haus of Tech: where the exhibition took place

Red brick. Bare concrete. Rusting steel. TOA 2019 main exhibition ground may remind of good old days, even when it’s all about the future. The attendees could check out the big players (i.e. Google for Startups, Samsung Next, or KPMG) as well as several successful companies and startups like Flixbus, Knotel, Antivity or Infarm. While walking through the exhibition space, we even stumbled upon our friends from the leading co-working space, Factory Berlin, who even brought a ball pit to their booth! We have to say it feels like home to be in Germany's capital - not only we’ve run UX workshops there a couple of months ago, but also we frequently take part in local startup events. 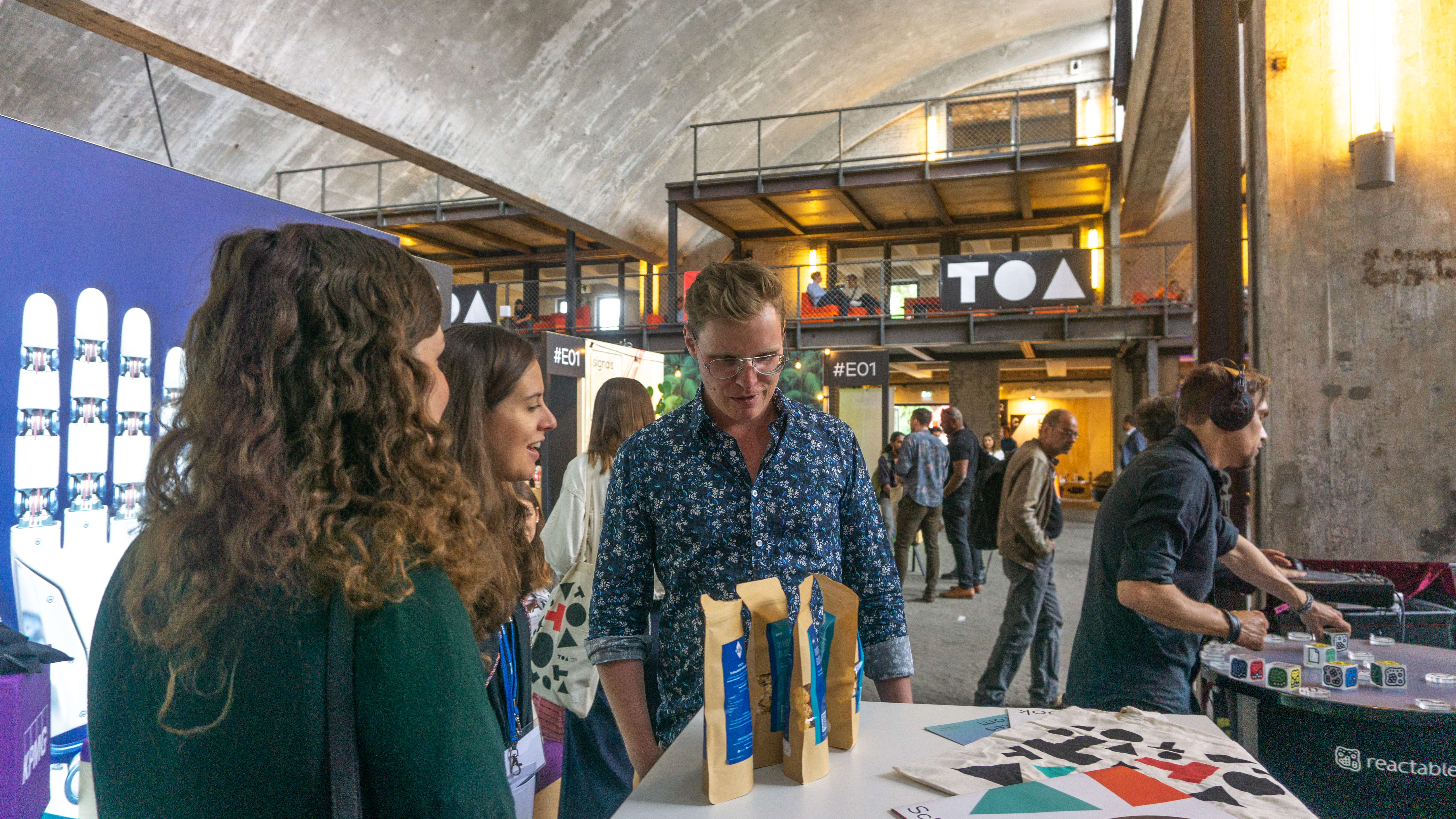 How to attract attention in TOA?

The main area was surrounded by several points delivering freshly brewed coffee, vegan food, beer, and traditional German sausages. Fulled with carbohydrates, we could maintain our tight schedule, which was filled with networking, workshops, and matchmaking. Thankfully we could use the app provided by organizers to easily manage everything! From our perspective - active users and software house delegates, the TOA app was one of the greatest features, connecting us with people of similar fields of interest. We managed to benefit from this Tinder-for-business solution by having a chat at the meeting mezzanine. It not only was easy to navigate not only thanks to the numbered tables but also due to plenty of volunteers that were stationed there.

Berlin isn’t just a startup ecosystem. It is one of the biggest webs of trams, subway and bus lines. Getting from one point to another was very time absorbing, but without this network, things would certainly get worse. Of course, on your way from one conference to another, you can’t resist to step into one of the thousands of restaurants and grab some rice noodles and Berliner Kindl.

Majority of the events were hosted by one of the great co-working spaces offered by WeWork, Betahaus, Unicorn Workspaces as well as the big players, like Siemens. The presentations, conferences, and exhibitions served with a wide spread of topics, including software development outsourcing, the productivity of remote engineering teams, User Experience tests, and general industry-oriented topics, like Foodtech or Fintech.
Satellite events gathered smaller, but more targeted groups, which created a friendly environment for networking, pitching, and know-how exchange. Most of them took place late afternoons, which somehow was like catching a breath after long hours spent in the Haus of Tech. 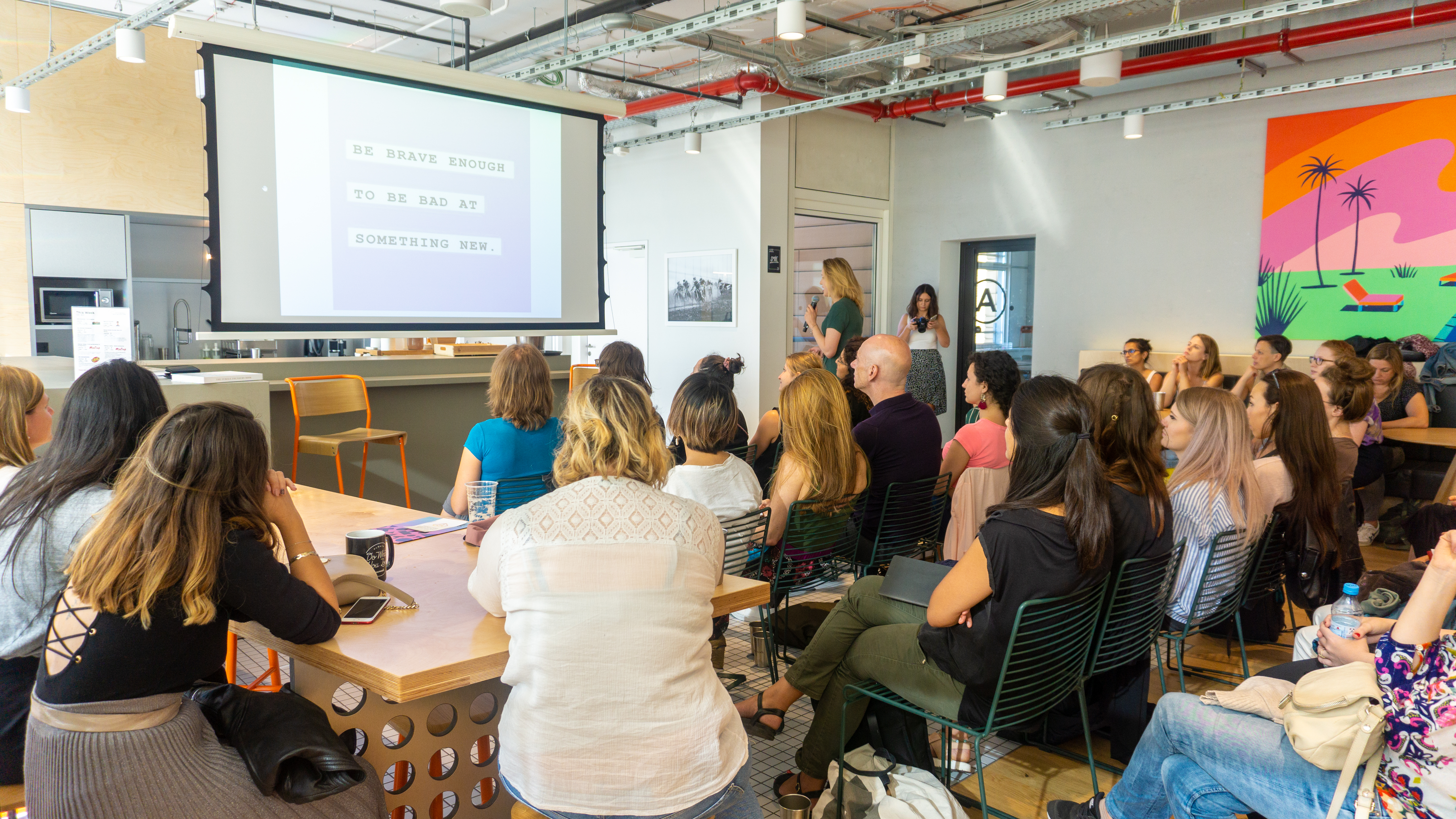 No conference would be complete without after-parties, where networking is a bit easier due to the more relaxed atmosphere. With our interactive tickets, we were able to take part in  for instance Samsung Next party, which happened on the last day of TOA. And let us tell you one thing - it was a good idea that we attended it! Not only it was a party like we’ve never seen before (after all, which conference also offers tarot reading?), but we also met plenty of great people! And after two days filled to the brim with gaining new knowledge, we had plenty to talk about!

Events like TOA help non-Berliners realize how great of a tech hub the Hauptstadt can be. With a long list of exhibitors, dozens of satellite events and many fields covered, the event meets expectations of probably all kind of tech and business people operating in a digital world. Anticipating such a widespread of needs is extremally challenging, but also builds unexpected opportunities in the fields of networking and research. 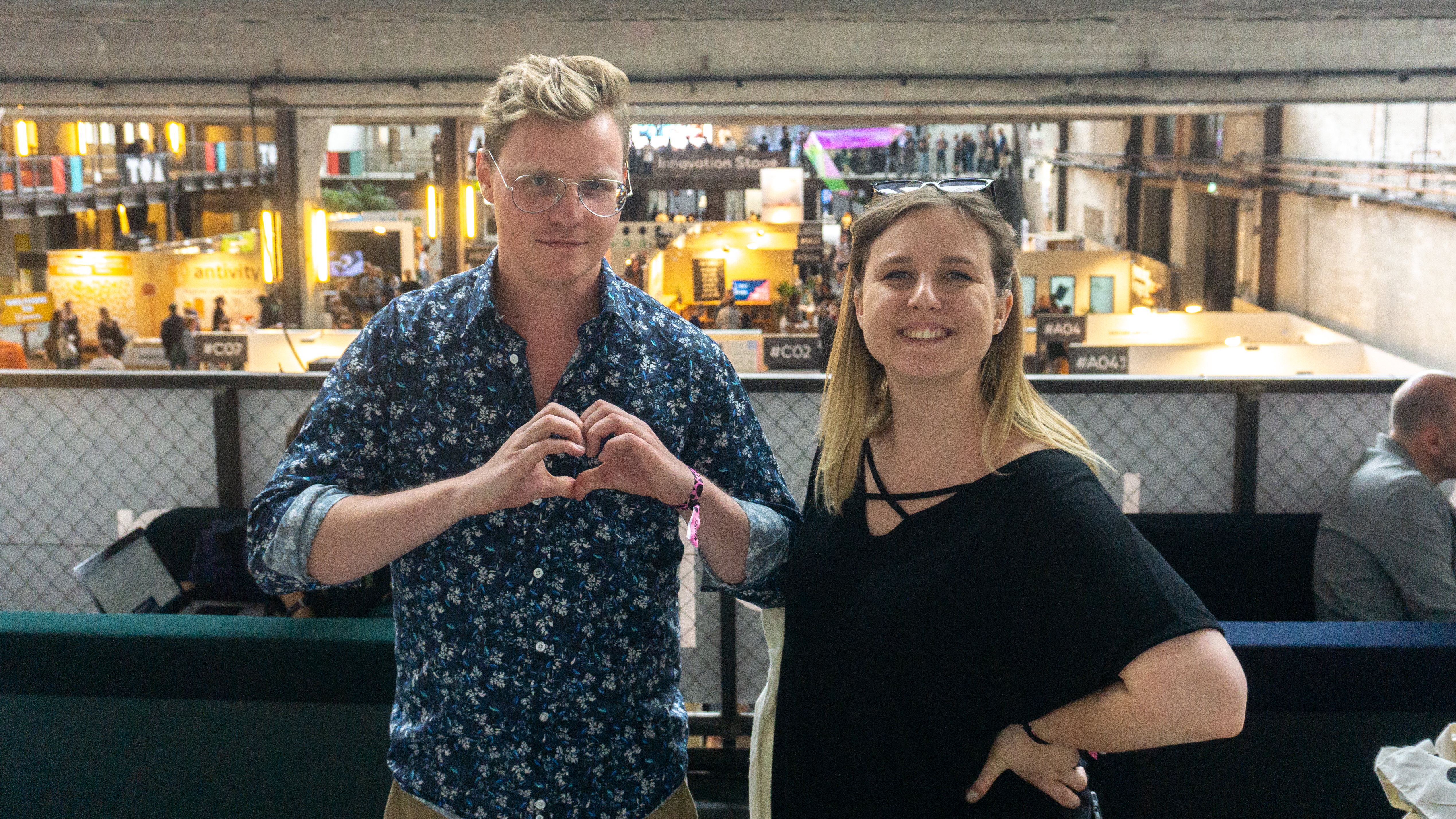 And here’s us - showing our approval of the whole conference ;)

From my perspective, it was a great value to learn about needs and difficulties faced by CPO/CTOs based in Berlin, Munich and other main German tech hubs. Many professionals and managers struggle with recruitment issues and costs of service development. Startup and Agile professionals usually are very happy to share knowledge based on their previous projects. Perhaps product and service management, performed by groups of remote teams could be one of the leading topics for the upcoming years?