Eden Games is a well-recognized game development company that's known for developing such games as Kya: Dark Lineage, Titeuf: Mega Compet, and Alone in the Dark. They are especially known for the car driving simulators such as V-Rally series, Test Drive Unlimited series, and one of the best car games in the history, Need For Speed: Porsche Unleashed.

Eden Games approached us to create a promotional website for their newest mobile game, Gear.Club. It was a brand new way of providing entertainment for players that love car games since it allowed them to switch from PC and consoles to iOS and Android-based mobile devices. Eden Games not only has done a great job polishing the graphics of the game but also provided an addictive gaming experience to their customers.

Spin the Wheel! - the concept of the campaign

The idea behind the campaign was pretty simple - it needed to encourage people to interact with the brand and download the game by providing them with interesting prizes. To win them players had to register on the specially dedicated website we've created. After the registration, they could spin the wheel to receive one of the six types of prizes. Some of them, such as gold, dollars, and rewinds, were also available in various amounts. This, combined with tiers (the more you've spun the wheel, the better were the chances to win more valuable prizes) provided an engaging environment that got players involved before the game launch.

The mechanics of the project

About 30 days before the Gear.Club game was about to be released we've started the pre-registration campaign. Players were able to register on the dedicated website we've created and participate in the Spin The Wheel action to receive in-game rewards.

Each of the players was granted an amount of daily spins. They also could get additional spins for sharing the site on social media and by inviting their friends through the referral code.

Whenever they spun the wheel, they could decide whether they want to save the new offered prize or keep the one they've already chosen. And the more they spun, the greater were the chances to win the most valuable in-game items - including Camaro 50th anniversary car. 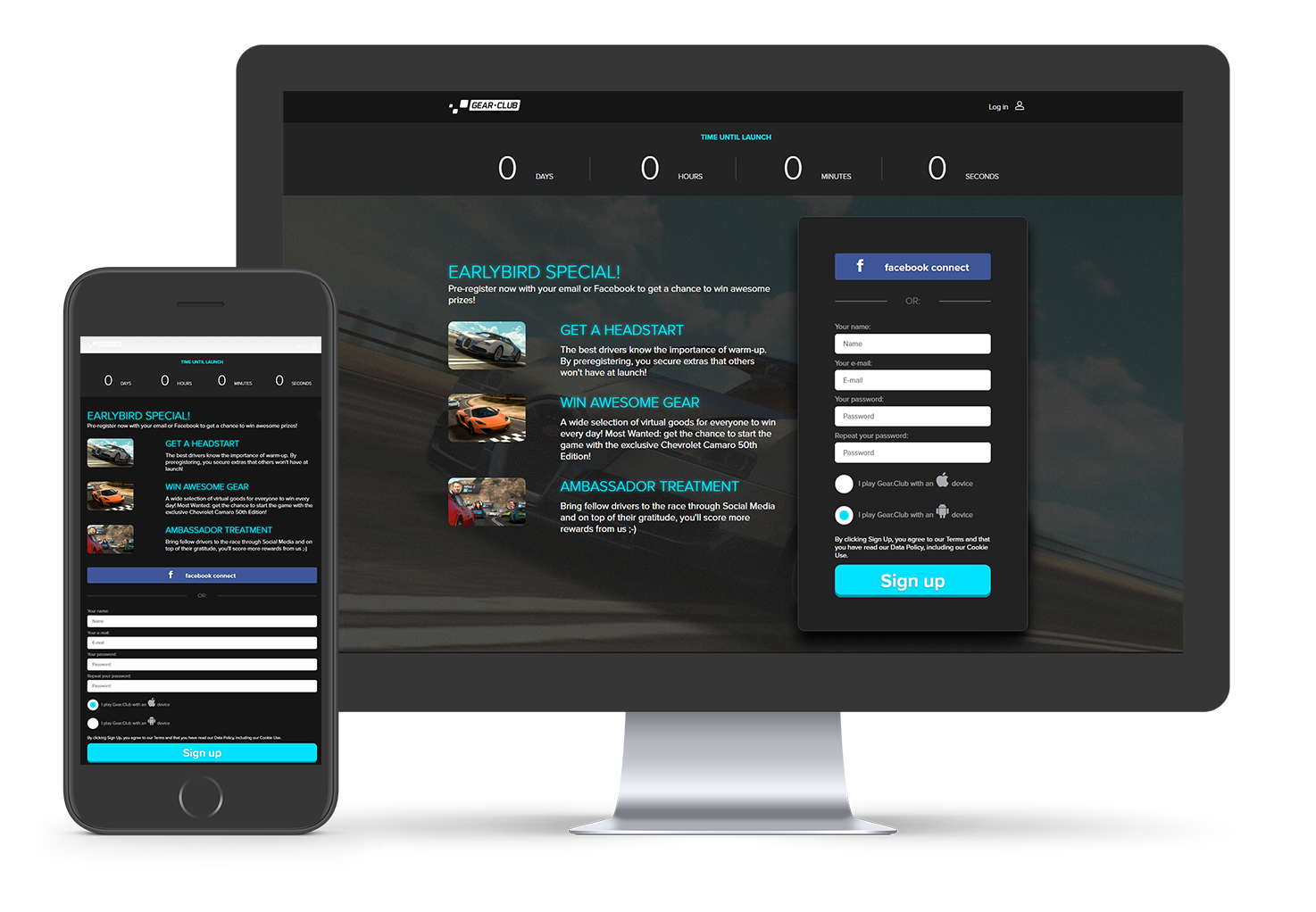 Players could receive one of the six types of attractive in-game prizes:

On the day of the game release, every registered player received a link that allowed to download the game or claim the prize if they've already had it installed on their devices.

When it comes to the interface side, the front-end development technologies we've used include HTML5, CSS, and JavaScript. To keep the playing experience nice and smooth we've applied AJAX for some of the actions available on the website.

For implementing the functionality and site administration, we've used Django (a Python framework) together with PostgreSQL for the database. It turned out to be the best fit since some of the prizes were available in different amounts and the chances of getting all of them changed with the number of spins the players used. It required the prize-winning algorithm to run fast and without any issues.

On top of that, we had to integrate the whole thing with TROPHiT, a solution that allowed players to claim the prizes they won through the website as virtual items in the game itself.

Web development for the gaming industry

The main goal of this project was to provide a website and tools that invite new players to register and download Gear.Club game in exchange for exciting in-game rewards. The campaign helped to generate more buzz in social media, attract new players, and make the game more recognizable. In addition to that, it also incentivized the players who've already known that the game was coming out. They were then able to spread the word, invite their friends, and download the game as soon as it was out so they could “cash in” their prizes and enhance their playing experience.