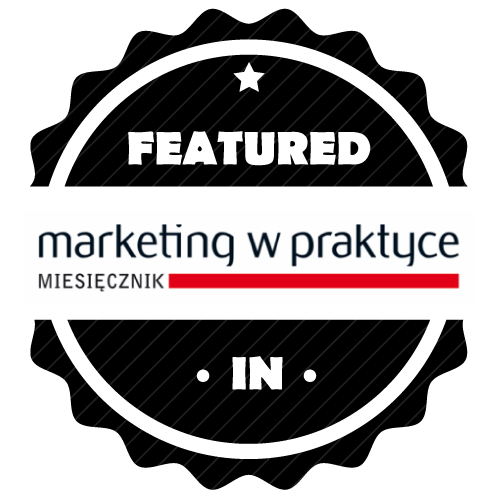 Regardless of how or where we buy, clients are accustomed to the access to the content on multiple devices. When they visit the store, they expect visual and interactive experiences to which they got used to via responsive websites and mobile applications. They want to have the possibility of browsing through the content an simultaneously sharing the content with their friends.

Such development of pattern sends out a clear signal to retailers how necessary it is to adapt retail spaces to rules of the Internet. New technologies help in doing that that by rising the “customer experience” to a level previously known only in the online world.

A lot has been said about the huge impact of technology on marketing and about the way brands communicate with clients. It’s worth quoting the conclusions for the research made by the American company Gartner - their analysis estimates that by 2017 budgets to be spent on adapting new technologies assigned to marketing executives will be higher than the overall expenditure of computer science’ executives. Not without a reason corporations look intensively for CMT – Chief Marketing Technologist - who is a specialist in both marketing and technology. Such people, sometimes called “agents of innovation” are what makes or breaks the company.

Technology and marketing should inspire each other. Regardless of the retail, travel, education, banking and finance markets, a modern (and preferably the two-way) interaction with consumers is "a must-have" for effective marketing communication.

The creative potential of advertising hidden in this technology is enormous (and I believe it’s still rarely used in polish advertisements). Web socket is a protocol responsible for real-time communication used in client-server applications. The standardization of HTML5 and Web Socket became the driving force of further development of the Internet of Things (IoT).

This technology guarantees fast, real-time data transfer. Its main advantage and the difference in the comparison with standard HTTP requests is its bidirectional communication. The data transfer is instantaneous, it does not require sending the request to the server. Currently most popular web browsers and mobile devices support this technology. Thanks to Web Sockets applications for Digital Signage screens may become a fully interactive, smartphone-controlled games or web applications.

The capabilities of Web Sockets were wonderfully used by McDonald’s in their promotional actions. Campaign organized on the busy crossroad in one of Kuala Lumpur’s districts used the possibility of streaming data between huge digital billboard and passersbys smartphones. 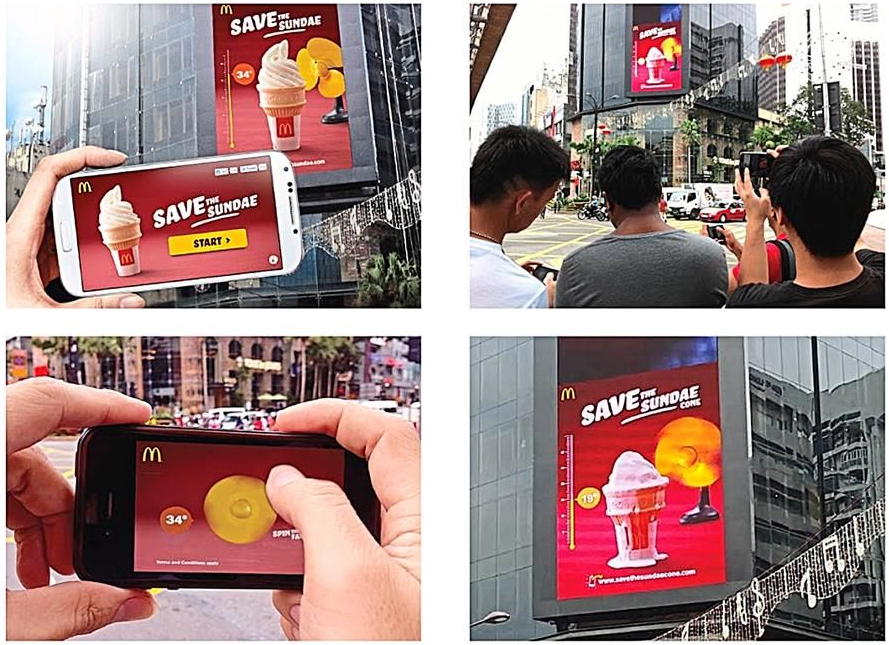 During one of the hottest afternoons – the temperature reached 40 degrees – a big screen was installed on one building. It showed Sundae ice cream (the campaign was named “Save the Sundae”) which was slowly melting – the process could be slowed down by the potential consumers. In order to do that they had to turn on the digital fan. As a reward, participants of that campaign received free coupons, which could be used at the restaurant nearby.

There was no need to download any additional applications – all what was necessary was a stable 3G or 4G connection with the Internet. Additionally, the connectivity of many people at once was enabled, which obviously slowed down the process of melting even more. Undoubtedly the measurability of that project became the added value as it was relatively easy to count the amount of users connected to the server or to count all unique coupons that were generated.

The company responsible for the programming and the implementation of the infrastructure ensuring the communication between devices had to cope with delays caused by the transmission of data of this size. The smoothness of the whole process, especially of the fan’s animation while a few users were connected at once, was the key factor.

The other interesting event organized by McDonald’s was the installation of the billboard that allowed to play Pong on the streets of Stockholm. (Pong is one of the oldest simulations of table tennis released by Atari in 1972.) 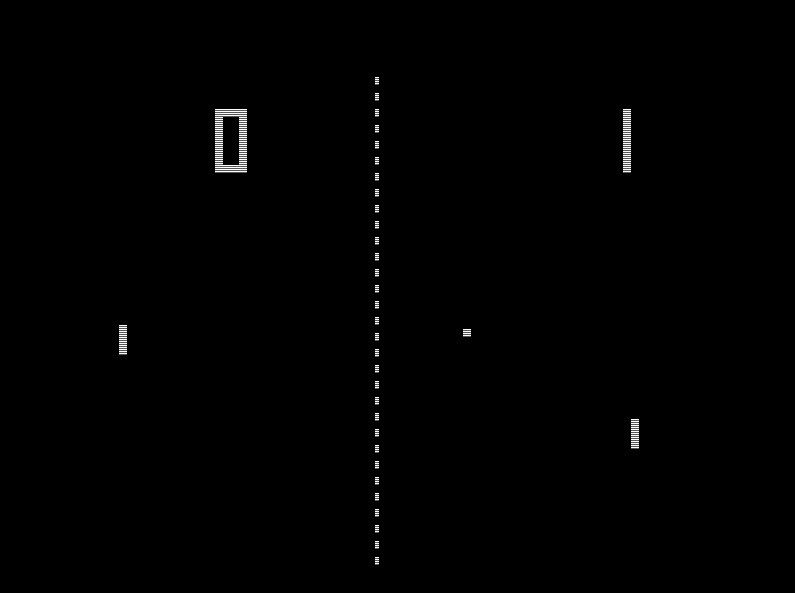 The aim of this game is to score more points than the opponent. In McDonald’s version, passersby could use their smartphones as paddles, trying to not let the opponent score in 30 seconds. 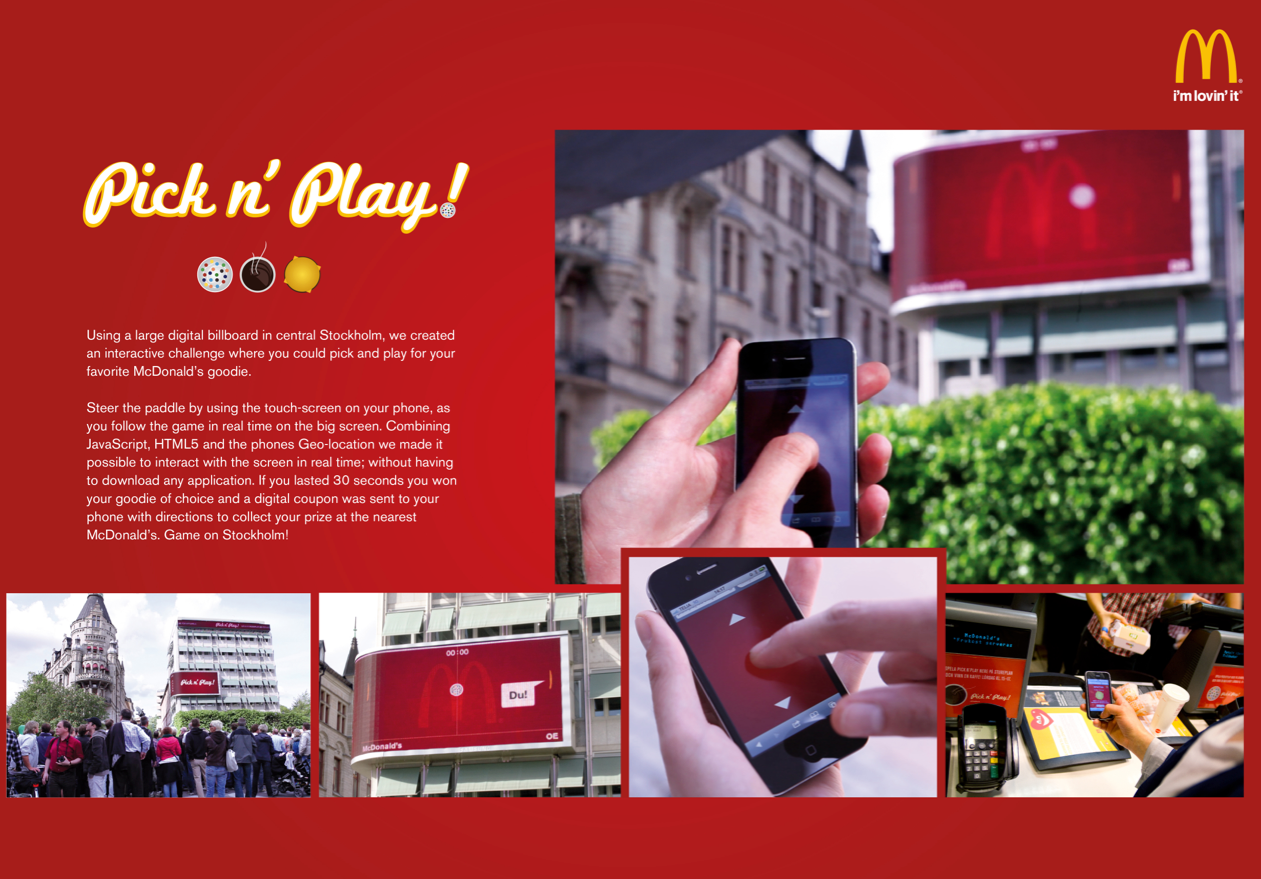 The aforementioned McDonald’s campaign inspired us to spice up a trading event organized in Antwerp, northern Belgium. The event was promoting “Innovation Boulevard”, a shopping arcade. The challenge was to enriching customer experience of the event via using the newest web technologies. We mixed the classic concept of the “Snake” game with HTML5/Web Socket technology, which enabled us the bidirectional communication. The game was installed on big LED screens and allowed to play in multiplayer mode (minimum of 2 players, maximum of 6). Every participant of the event could play  – all they needed was a smartphone with 3G or 4G connetction with the Internet in order to establish connection with the screen. Entering the game was possible after scanning QR code and/or typing dedicated URL address. 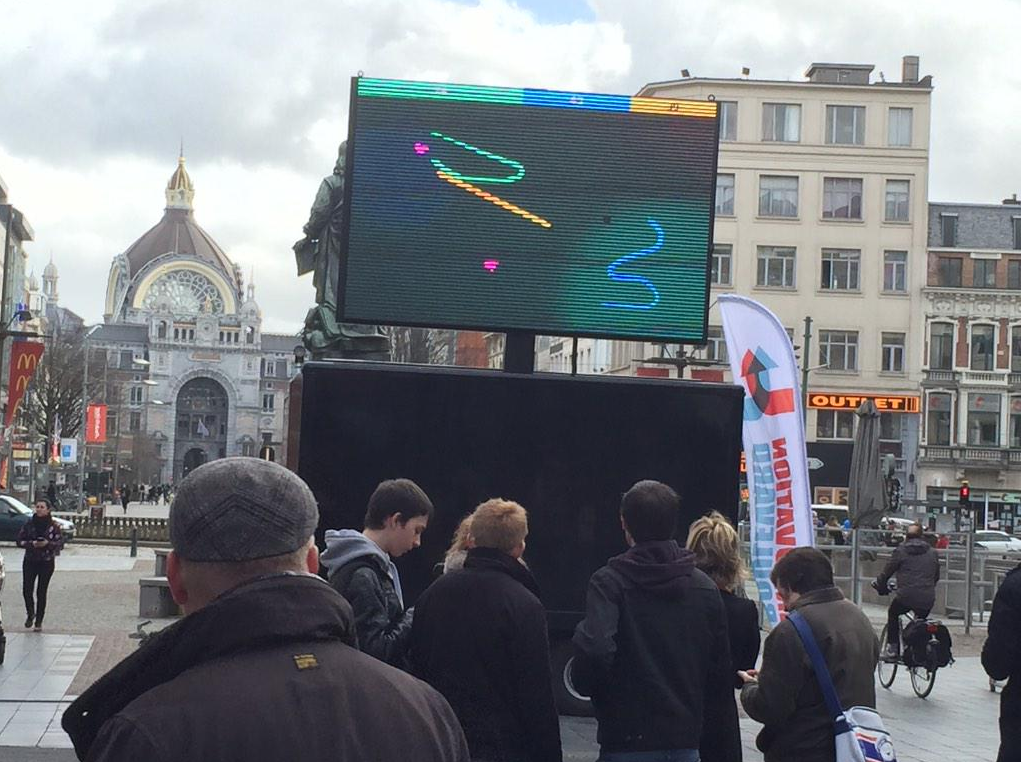 There’s huge advertising potential in the multi-screen experience concept. Aforementioned events prove that technologies that enable such interaction are already available and they don’t large sums of money. This technology includes a variety of creative and ready to utilize (many of them could become mainstream) solutions, such as, for instance, Georgian brewery created “Virtual pub” - the application which turns your smartphone into a controller that allows you to pour beer for your friends.

The example of the practical use of this technology is the interactive application Touch&Go which we created in HTML5/Web Sockets for the company from Belgium. This application allows to manage the content visible on the DS screens with mobile devices without the need of downloading additional applications. The user scans QR code in order to establish connection with the display and to browse through and save available materials (for instance: offers from travel agencies, or temporary employment agencies). 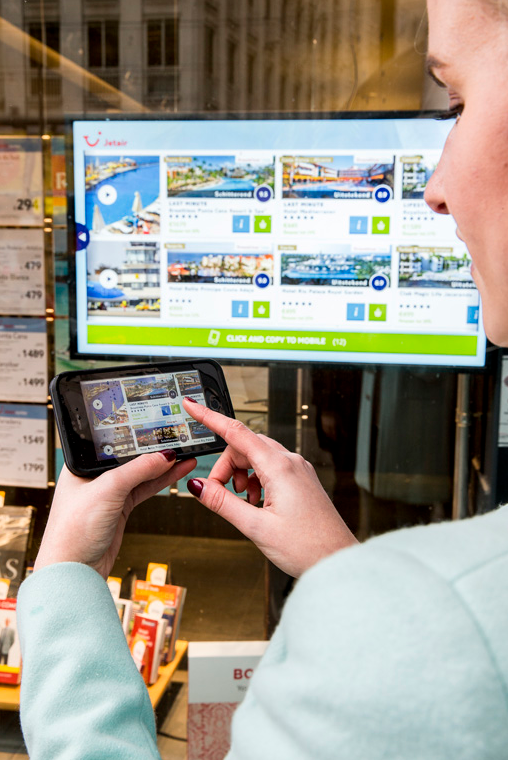 At the end of 2014 Google announced that not applications, but URLs are the future of the Internet of Things. What does it mean? The company from Mountain View reminds us (and rightly so) about the potential of the well-known form of addressing the online resources - the URL (ang. Uniform Resource Locator).
The Physical Web means that the interaction between man and the object should not only be possible, but also as intuitive and fast as possible. This concept, known and developed thanks to the Internet of Things, assumes the independence from mobile applications. In other words, scaling the Internet of Things is impossible if communication with the objects requires installation if the application on your phone.
Mannequins behind the shops’ windows send the address (URL) that is directing to the web application - a virtual fitting room, which will create a simulation of the outfit by using the photo taken on the mobile. Bus stop informs passengers about the current timetable. Vending machines send link to the website with additional information about the products and the possibility of online payment. All of that is supposed to happen without the necessity of downloading additional applications. To make it happen, it is necessary that this technology is available in the operating systems of popular mobile phones. The key to popularizing the concept of Physical Web is that companies such as Google, Apple and Microsoft have to jointly develop one standard that will be common for ever user.

While Google promoted the idea of Physical Web, Microsoft has started working on their project - Geo Origins. According to Bill Gates, the major disadvantage of Physical Web for a customer is the necessity of making some kind of an additional action (like typing an URL) in order to establish connection. In the space filled with beacons that are sending push notifications to mobile consumers, it was necessary to introduce this type of restrictions. Without them, the customer would simply be flooded with spam as soon as he enters the building. The multicontextuality of the purchasing process makes it impossible to state that sending automatic push-type notifications is good from the Customer Experience's point of view.

Microsoft is trying to find a compromise - the immediate push notifications depend on two factors:

Marketing success, however defined and measured, will be increasingly dependent on technology and, more specifically, on people who are responsible for the implementation of those technologies to the marketing strategies. The key to achieving a competitive advantage in this situation will be to find a technological business partner. Great agile software house will be able to reconcile the digital needs of the brand with advisory and development skills, what allows for creating tailor-made web solutions. Thus, not only the big networks and recognized brands, but also smaller local businesses will be able to afford to build the Customer Experience of the XXI century.

HTML5 can be rocket fuel for interactive retail digital signage

April 27, 2016
Learn all about the risks and opportunities of mobile scaleup.
X
WATCH EXPERT DISCUSSION
How to ensure healthy mobile app growth?
In the product lifecycle, the growth stage comes with challenges, risks, and opportunities. We share the design and development tips on how to prepare your mobile application for scaleup. WATCH EXPERT DISCUSSION
X