What is Latent Dirichlet Allocation?

The problem that we would like to talk about here is to find the best segregation of documents according to their topics. This kind of separation can be used for assigning a topic to a document (which is called topic labeling) or for general determination of compressed characteristics of a huge text data set.

Latent Dirichlet Allocation (LDA) is an unsupervised machine learning method that is a state-of-the-art approach for this kind of problem. It is based on a straightforward mathematical probabilistic concept of Bayesian inference, but despite its tough theory, in the end, it is pretty simple to use. Bayesian inference is a way to get sharper predictions from your data. It’s particularly useful when you don’t have as much data as you would like and want to juice every last bit of predictive strength from it.

There are various possible applications of LDA: for finding questions on stack overflow that are similar to each other, news flow aggregation and analysis or any document categorization that is based on a group of structured text data. The first time it was used in biology on a multilocus genotype for population inference.

No human investigation can be called real science
if it cannot be demonstrated mathematically.
Leonardo da Vinci

Latent Dirichlet Allocation is a generative probability model that is constructed along Bayes Inference. It provides distribution of outputs and inputs based on latent variables, whereas the only observed values (grayed out in the graph below) are words. This approach requires only a few assumptions to be made. One of them is the number of topics 𝐾 we want to distinguish. The others are 𝛼 and 𝛽  which we will mention later.

LDA has its pythonic implementation in sklearn package (sklearn.decomposition.LatentDirichletAllocation). A number of topics should be pass through the n_components parameter.

As we search for the distributions we have a general idea of how they should look like.

This prior knowledge added to the model is the core of Bayesian statistics and provides better performance. For distributions 𝜙𝑘 we expect that some words will occur often in the 𝑘-th topic and the ones that will be very rare, therefore skewed distributions of 𝜙𝑘 would be appropriate. For distributions 𝜃𝑑  we usually assume that the topics are uniformly distributed across the 𝑑 -th document. Both situations can be reflected well using Dirichlet distribution, although with different parameters:

It's worth highlighting that random variable is drawn from 𝐷 𝑖𝑟(𝛼) and 𝐷 𝑖𝑟(𝛽)  are matrices of 𝑀 and 𝐾 rows respectively. They are called \"priors\" and in sklearn can be provided with arguments doc_topic_prior, topic_word_prior. Of course, if we expect some topics to be more popular we can manage the 𝛼 parameter to bias the model toward those topics.

Iteration runs several times across all the documents in the corpus calculating the probability of the topic each time taking the output of a previous run as an input for the next one. For  𝑛 -th document we have the following formula:

In the above equation, we assume conditional independence. This procedure is called Gibbs sampling.

Using the idea of the generative process we assume that each document has a topic characterized by a distribution over all the words. That way we define

for each of the word positions 𝑑,𝑗 where 𝑑∈{1,…,𝑀}, and 𝑗∈{1,…,𝑁𝑑}, where 𝑀 is a number of documents and 𝑁𝑑 is a length of a document 𝑑. Random variable 𝑤 is a matrix containing the probability of each document being to a certain topic.

I use `Python 3.7` for below computation and `jupyter notebook` for my IDE. You can find detailed requirements in our GitHub repository

Before we start coding, let us set basic notation.

We will use the following external libraries:

The data was downloaded from Kaggle Datasets. For the corpus of our dataset, we will read all the downloaded articles into one list corpus. We will use the folder name as a list of labels - this will be handy later for validation of LDA effectiveness. If you create a python script in the same directory as the downloaded data you can use bellow code to import the data.

Before we can use our data to build a model we need to prepare it to a form that will be understood by the LDA algorithm.
It can be done by building a matrix that has documents for rows and a bag of words (list of all words from the corpus) for columns. That way defining a count of certain words in each document. To achieve a better performance will also clean the input data so that the maximum amount of information can be represented as the smallest matrix possible.

We will start with tokenization, which will split our documents into sentences and then into single words.

Since we imported the corpus, now we will tokenize each document. We will also lowercase all the words and remove nonalphabetic characters from them. We do that so we can count the number of certain words in each document later on. We see now that rare words or word variations contain relevant information as they would just be the tail of our distribution.

Now we will remove stopwords. Using the same logic we discussed while tokenizing, we now remove all the words that frequently appear in all documents. Their value for topic labeling is meaningless.

The next step is to stem the remaining words. Here we are standardizing words to their root.

Let's take a look at how it went.

Perfect, the data is preprocessed and ready to apply LDA on it, but we would like to use a little improvement called Term Frequency–Inverse Document Frequency.

The idea of Term Frequency - Inverse Document Frequency is to penalize the common words assigning them lower weights while giving importance to words that are rare in the entire corpus but appear frequently in few documents.
In the classic approach of LDA we use on input a matrix of word occurrences:

While TF-IDF is a product of two matrices:

which gives the weight for each word in the document and

which calculates inverted weight of a word in the context of all documents, promoting rare words. The resulting matrix

has the highest values for words that are not common in the corpus.

Both LDA and TF-IDF matrices are sparse which can cause some computing problems. That fact is recognized as a disadvantage, but it can not really be addressed straightforwardly to the method itself.

Let us now obtain the desired matrix, basically, all we need is a TfidfVectorizer class from sklearn library. We will use our previous work in parameters.

For more details and all parameters explanation please see the sklearn documentation.

We will check the 10 words with the highest probability for each topic.

Looks like the topics could be: movies or entertainment in general, economy, sport, politics and technology.

Let us wrap it into a Pandas Dataframe so we can analyze it more efficiently. 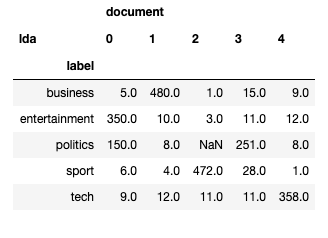 Comparing "lda" results to "labels" that were taken from the data set, we can see that almost all of the articles were correctly specified. Only politics news were divided into entertainment and politics, but still, around 40% more were assigned correctly. That uncertainty is understandable, we saw that these two topic shared the same words.

Let's look at the matrix of probabilities for each document to better understand retrieved results. 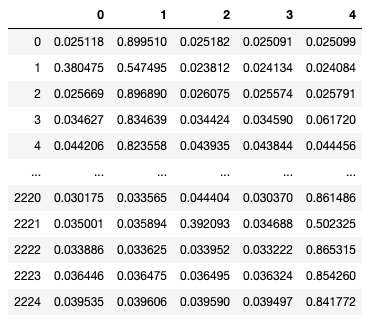 Above density, the plot shows, on some randomly selected documents, probability scores for each topic. It is clear now that some of the documents were almost equally classified in two categories so that the error is highly probable. That cases should be always taken into account.

Is it worth to use Latent Dirichlet Allocation method?

The big advantage of using this method among others is that it gives a score for each topic belongingness, not just the topic indicator which can be helpful for determining the actual result correctness. It is quite important if we are training our model on unlabeled data.

Latent Dirichlet Allocation is pretty effective and really simple to use with Python which basically gives the machine learning capabilities to everyone who needs it. You can find all the code used here in our Github repository.

How to use Django in Machine Learning to detect a hate speech? (Pt 2)

How to use Django in Machine Learning to detect hate speech? (Pt 1)