Where does this fuss come from? What’s the root, what’s the cause? Are the problems with finding programmers related anyhow? I’ll show you that there is a logical sequence of circumstances behind the problem 40% of employers face. I call it the shortage funnel.

The business landscape is changing towards further automation and digitalisation. A survey by The World Economic Forum shows it loud and clear that big data analysis, application development, and IoT are the top three areas in which businesses plan to invest.

Who are they going to need in order to achieve the goal of digitising all the things? Yep, they will have to find programmers. At least 133 million new roles globally by 2022, most of them related to software engineering. 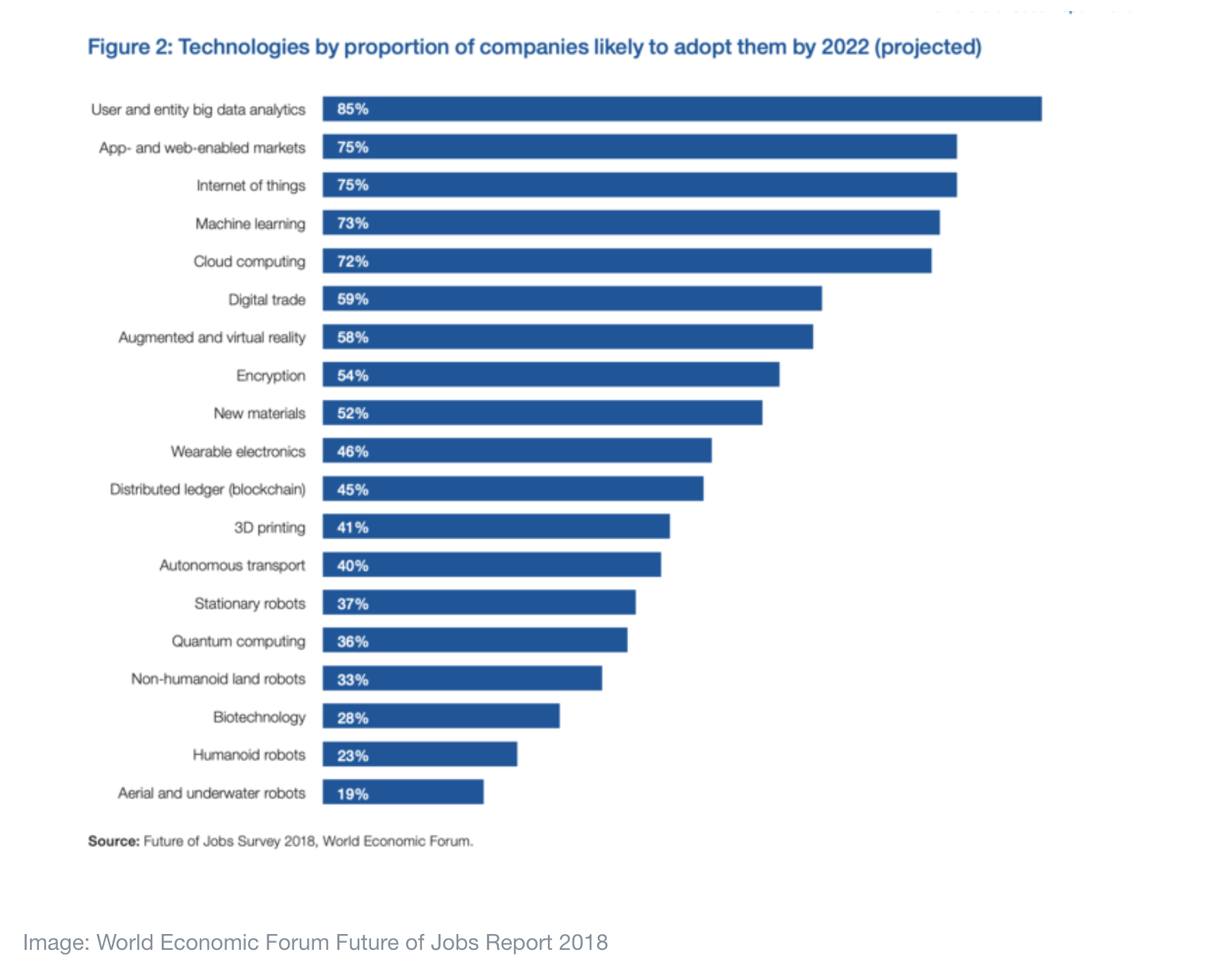 It’s not anything new. When we take a look at the numbers from the last five years, it will become crystal clear that the demand for software engineers has been on the rise for quite some time now, regardless of geography. The US Bureau of Labor Statistics projects software development employment to grow 21% by 2028, which is four times faster than an overall pace.

It’s no different in Europe. Here, the demand for programming-related jobs is growing 50% faster than the job market overall. This trend is not going to slow down any sooner. The biggest share of the 2019 software development cake belonged to Germany and the United Kingdom, each of which is a home of almost a million professional software developers. The needs, however, are much bigger than that. 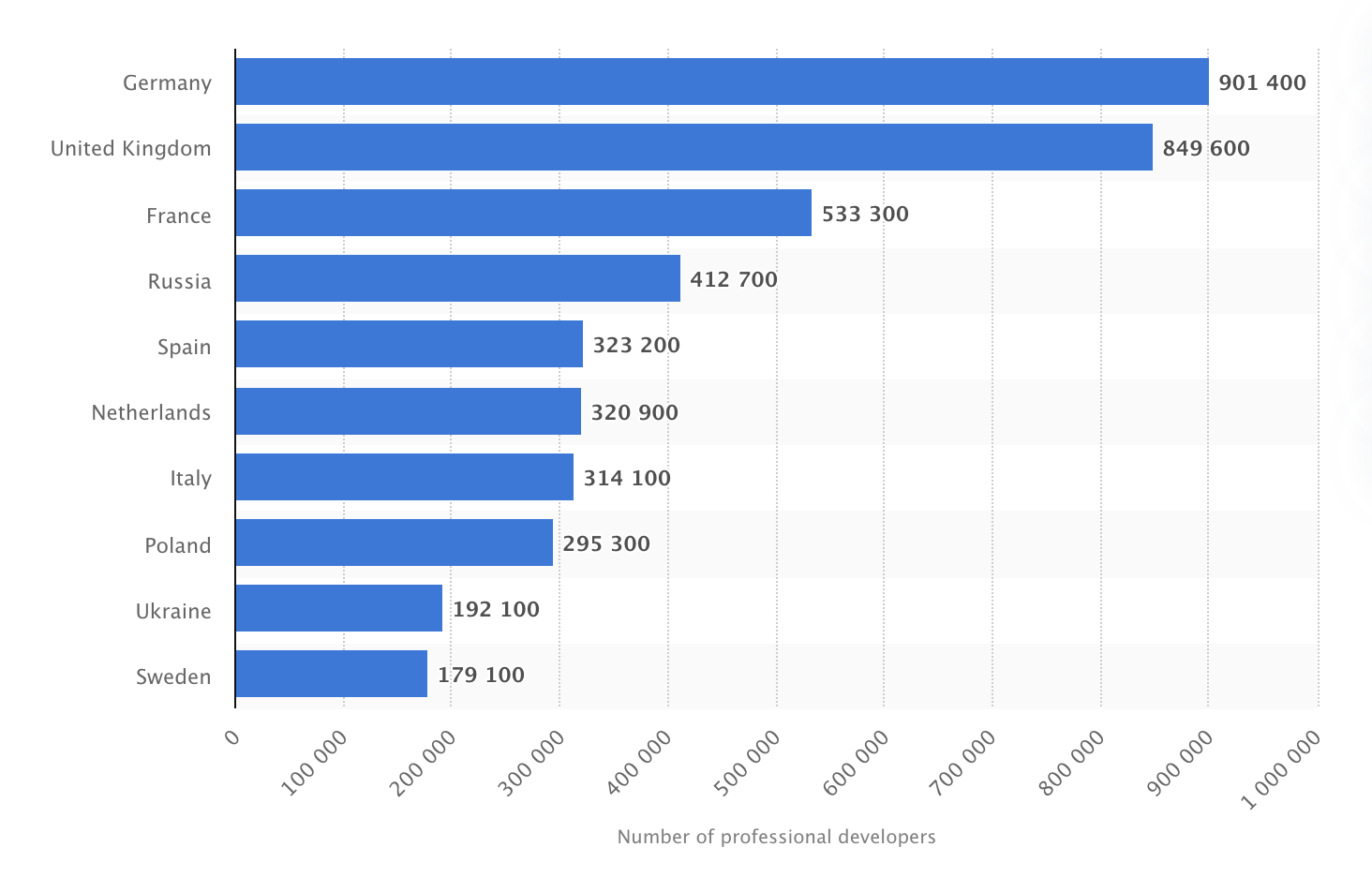 As Eurostat shows, the demand in the next few years won’t stay at today’s level. The only question is - how is supply going to keep up with such high demand?

Down the funnel: Talent gap - supply not keeping up with the demand

How hard is it to find programmers in Europe? Statistics say it’s not harder than anywhere else in the world but still not a cakewalk. And most probably, the situation will not get any easier in the near future. According to the European Commission, 2020 can end with over 750 thousand unfilled jobs in the European ICT sector. That’s a number even rapidly growing recruitment agencies can’t manage. 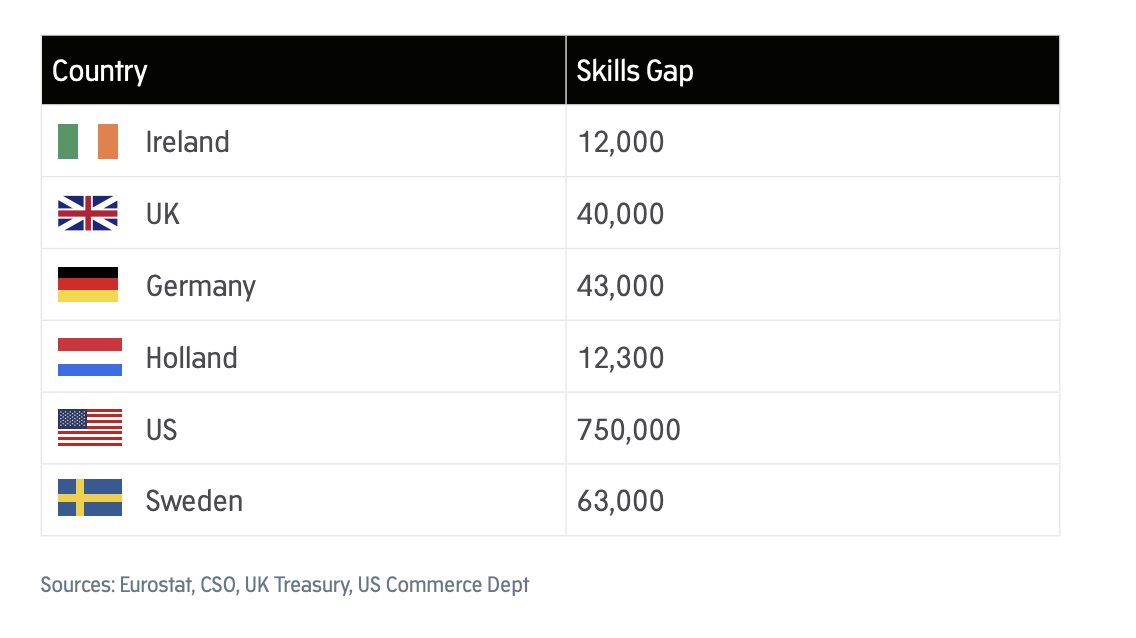 In order to counteract the risks related to the existing skills gap, companies move their software development to the CEE region with nearly a quarter of its professional developers placed in Poland. 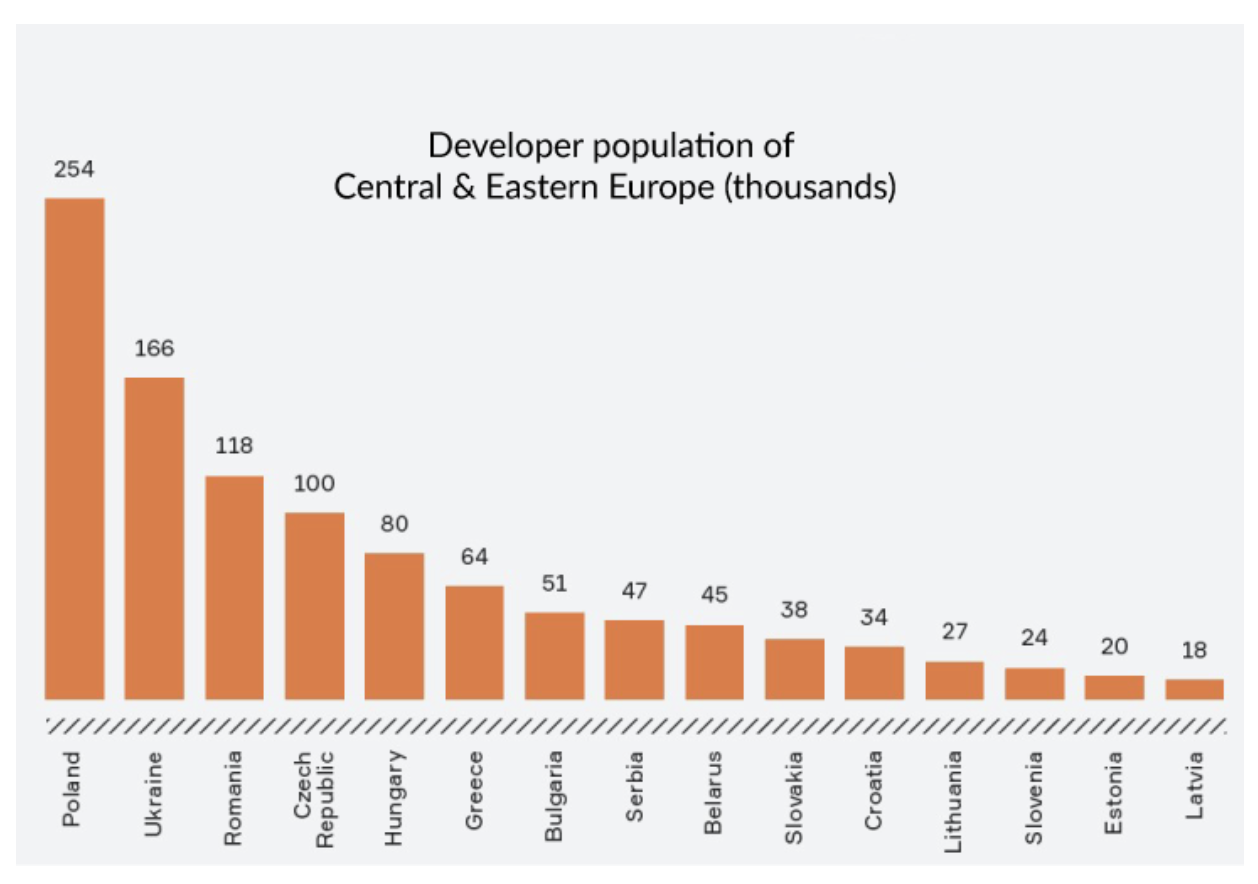 Middle of the funnel: Education - tertiary education, coding bootcamps or none?

If we lived ten or fifteen years ago, we could expect all software engineers to have at least a bachelor’s degree in computer science or related fields. However, the speed at which the demand is growing as well as the flush of new frameworks and languages has changed the status quo forever.

Looking at the 2018 Developers Survey, formal education is not a mandatory requirement. Only 66% of professional developers graduate from computer engineering. Universities are unable to keep up with the coding world, which makes their learning programs old the day it’s introduced.

That’s why almost 90% of programmers bet on self-learning. Close to half of responders took part in an online course and 10% participated in coding bootcamps.

The landscape of coding bootcamps is an interesting matter, too. The first bootcamp opened in 2011 and quickly earned its followers. By 2017, there were almost 100 full-time coding courses in the US themselves. Today, bootcamp graduates stand for 20% of the total talent pool on the other side of the Atlantic Ocean.

Such a high interest in non-formal education creates a growing work power and gives hope that the rising demand would be fulfilled eventually.

Undoubtedly, an updated learning program that focuses on a particular web or mobile technologies and frameworks is merit in the case of bootcamps. This flexibility comes at a cost. What might be lacking in a programming fast track is a more thorough perspective, understanding of different paradigms or processes.

Shortage funnel getting tighter at graduation

Now let’s take a look at the next step in the funnel, meaning we have a graduate on our radar. Does it mean that taking into account the shortage of developers, every new programmer would find a job instantly? Not necessarily, even though the numbers are still in favor of the novices who tend to land their first full-time programming job within 6 to 12 months after receiving their bootcamp certificates.

One of the reasons is that there’s an immense amount of effort on the employer’s side to actually shape such a novice into a software developer. Not every company (or startup) has the time, the budget or the will to do so. Instead, as the author of Clean Code Handbook points out, what the industry usually needs are trained individuals.

When we take a mismatch between the frameworks hiring managers look for and the ones developers master, the gap can get even bigger, especially when it comes to JavaScript frameworks. Comparing companies’ appetite to the potential workforce, React and Angular are the most difficult to hire for. 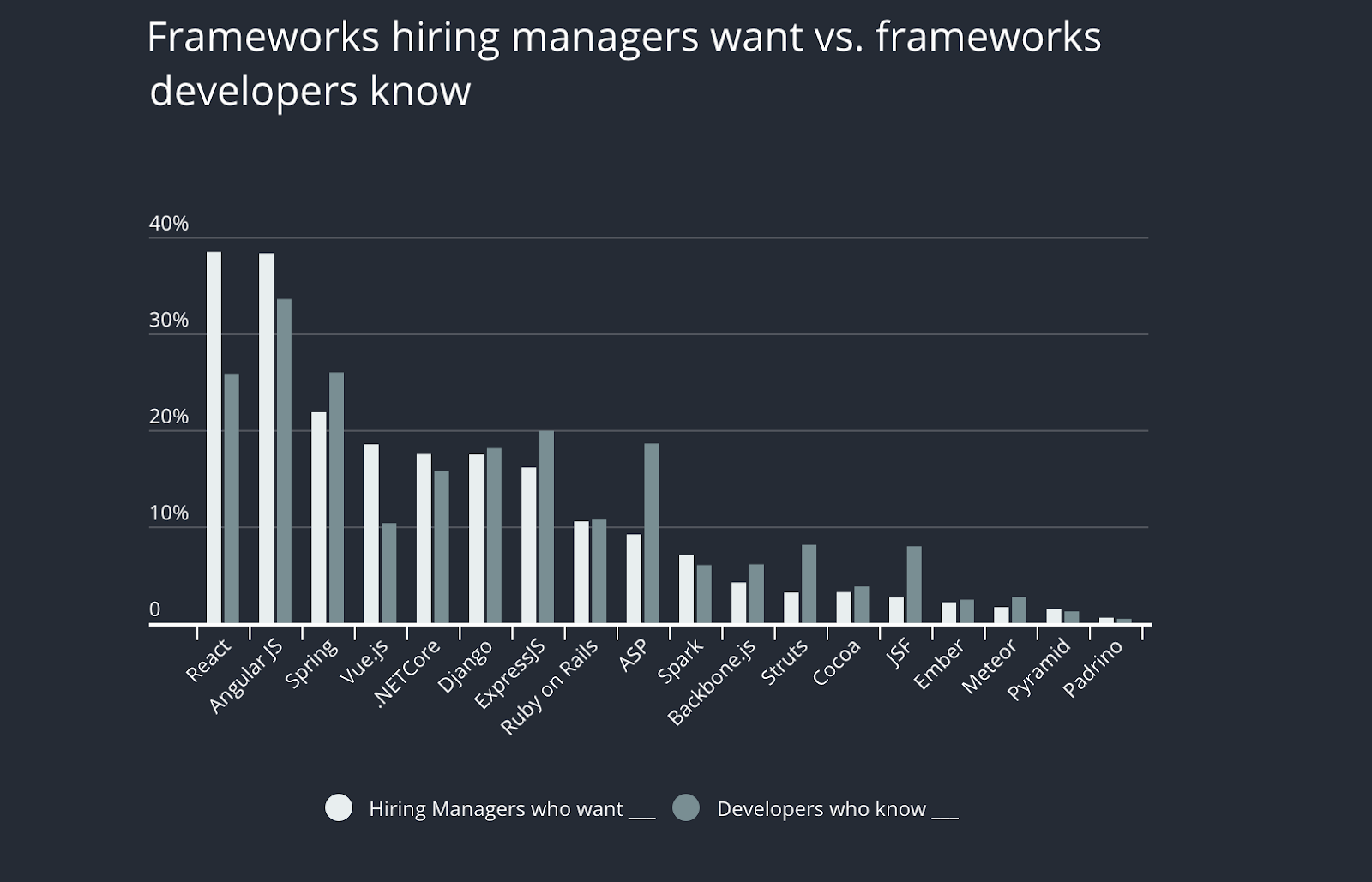 Everyone can become a programmer. Really?

It seems like the only way to go is to massively retrain people towards programming. It’s not that simple.

Many bootcamp participants struggle to get to the finish line of their courses. It takes a deal of hard work (not just at the bootcamp), the ability to stay cool-headed and persistent when faced with a problem and the self-taught spirit that makes one stay up late at night coding apart from a regular job.

On the practical side, software development is much more than just coding. The most demanded developers are not the ones who know the nuances of different languages and frameworks but the ones who are able to solve problems with some help of technology. 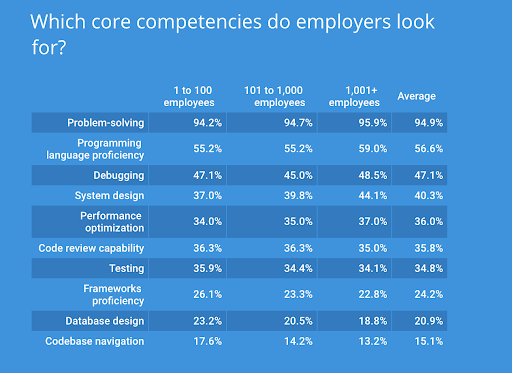 Neither studies nor other courses will teach you that. The temptation to re-skill won’t give you that. You either have it or not. The same goes for the ability to work in a team and to see and understand the business part of a software project.

Now, as an employer, you can take the risk of going through a long and costly hiring process, reviewing candidates who might not be ready to work with you or might lack the non-coding skills crucial to your team. That’s a tough nut to crack.

Bottom of the funnel: Find programmers that fit

Looking at the numbers, it’s hard to resist the feeling that there has to be a fierce competition between software companies, startups and the rest of the ICT world when it comes to fighting for a candidate’s attention. Let’s say you won it.  Does it mean that every programmer you interviewed was good enough to join your project or your company? Absolutely not.

No one knows it better than software companies that outsourced software development in order to offload the hiring game and focus on their products. Our development team in Merixstudio, for example, works closely with our customers. Therefore we need our programmers to be outspoken, clear in their communication and with an excellent command of English. But that’s not everything.

Unless you’re looking for a freelancer, chances are your dream programmer needs to be a team player and hold a big share of knowledge sharing spirit. And that’s a mixture that makes the bottom of the funnel really tight

The smart way to find programmers

There is more than one good reason why it’s so hard to find programmers for a digital project. Each reason carefully crops the chances of success. The good news is that you’re not alone. Every CTO or tech team leader has faced or soon will be facing the shortage. The bad news is that since developers are not made overnight, the trouble finding the right ones will stay with us for long.

One of the options to consider, after examining the numbers carefully, could be looking at Poland and its biggest population of skilled software developers.

Fed up with looking for the proficient software developers for your project? There's plenty of them in Merixstudio! See how we can support your project and why you should choose us to develop your digital product.

September 29, 2021
Learn which backend technologies to bet on in 2022!
X
READ GUIDE
Wondering what backend solutions to pick
We asked our engineers to share their best backend bets for 2022. See why they picked Python, Kotlin and Node.js, and which frameworks they paired these solutions with! READ GUIDE
X