We approached this project in a very enthusiastic way, even though the vision of learning about integrals based on hundreds of videos don't sound too enthused. Our job was to code e-learning platform for SaaS startup, integrate it with a payment system as well as encourage users that this way of learning will be better than the traditional one. What's the story? Due to totally new school examination standards introduced in Austria, our Client took the initiative to create the modern web application that combines his incredible flair for sharing knowledge and powerful Python development capabilities.

Usually, we organise and implement the workshops with Clients at the office, but this time we decided that it will be easier and more effectively to coordinate online meeting via Skype. We got to know Client's vision and also presented our solutions and ideas at the workshop. It turned out that our Client is open for suggestions from IT folks.

During the meeting, we determined how Competenz4u platform, which is the last resort for young people in Austria shocked by changes of graduation math exam, should work.

The wireframing and the spec

Axure RP is a powerful tool - there is no doubt about that. It allows you to design animated wireframes rich in interactions as well as simulate responsiveness between different views. Thanks to the endless possibilities of Axure, we created a clickable prototype in a short time. Based on its views we prepared the spec which was used as a core of the whole project.

The logo and UI design

Awaiting the graphic designer's proposals is definitely one of the most exciting moments of working on a digital project. Especially if we are responsible for both corporate design and user's interface. Based on previously created wireframes graphic designer designed a few versions of logo and interface. The Client was really happy about the effect.

In the first phase, we were building the project using waterfall methodology so after the first stage of specification and design we naturally took direction to frontend works. Marcin, one of our Frontend Devs, was dealing with a few problematic elements. In the end, he beat all problems and implemented the platform like a master. Marcin used such tools as HTML, SASS, Gulp, Gridly, and Video.js. The whole work proved to be not only incredibly light but also responsive. 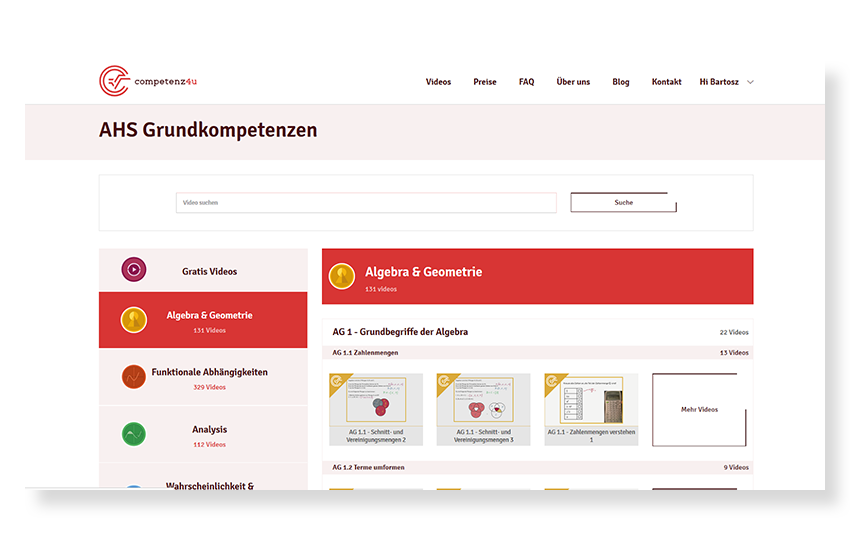 Chosen backend stack will come as no surprise. Django framework combined with Python language helped us create a sound basis for the project. Also, we were implementing PayLane and PayPal which we eventually changed to wiercard payments. It is worth to highlight that it was the main difficulty during working on the Competenz4u project. The Client had decided to install four different payment plans, and three of them were cyclical.

After about a year, we decided that it's time to refresh the project's design. So that, we removed the red colour from the layout because of the psychology of colours which says that red does come with danger and stress. This time we bid on blue because of its calming qualities. The blue colour can also boost the work of our brain. In addition, we wanted to add a "human face" to the Math. So that, we emphasised the human element in the design. 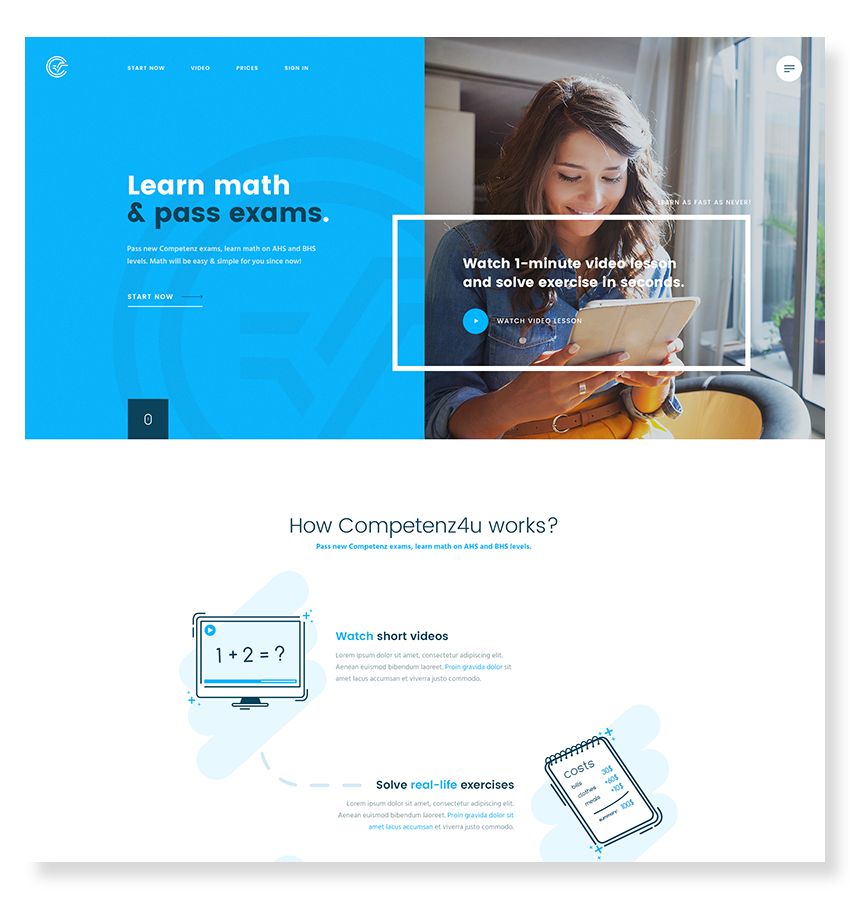 The fact that Competenz4u has been launched and now is enjoying commercial success doesn't mean that we finished our works on the project. In fact, now we come to the most exciting stages. There are absolute gems among the many small (but important) improvements which we've implemented to user views as well as the admin box. One of them is gamification. At the moment, we're applying gamification to the whole learning process and trying to increase users' engagement rate.

In the coming months, Competenz4u will start using games' mechanics, and therefore it will help students preparing for rigorous Austrian school-leaving examination.